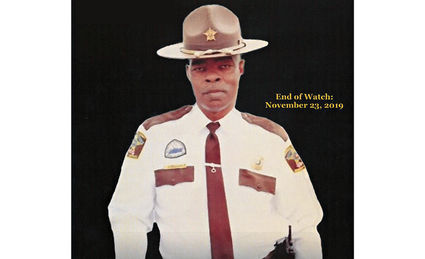 Sheriff “Big John” Williams tragically lost his life in the line of duty on Saturday, November 23, 2019, after answering a noise complaint at the QV convenience store in Hayneville in Lowndes County.

As the news of Big John’s death reverberated quickly throughout the county and the state, law enforcement officers from near and far responded to the Blue Alert that was immediately issued. They reacted in a way that was a direct reflection of how they knew Big John would, both before and after the suspect was taken into custody that same evening.

In the days that followed this senseless act, memories and thoughts were shared from citizens, officers, friends and even strangers, commemorating the life of Big John – and it all came down to the fact that Big John was truly bigger than life. It wasn’t just his 6’ 7” stature, but his Christian generosity and his call to duty no matter whether it was country or community, whether in uniform or in spirit.

Big John spent 40 years in law enforcement, and at 62, he certainly would have remained in service to the public in any way possible for as long as he had breath. Unfortunately, it was not in God’s plans for his service here on earth to continue.

On December 2, 2019, countless people from all walks of life came together at Garrett Coliseum in Montgomery, Ala. to celebrate this giant of a man and embrace his family and staff as they are still trying to come to terms with the loss of a man who was a friend to anyone he encountered.

Big John’s life celebration brought many pastors and politicians, and law enforcement officers to the Capital City to pay homage to their coworker, mentor and friend. Though a sad time, people could not remember Big John without a smile or a laugh, among the tears.

One of his closest friends and colleagues, Sherriff Derrick Cunningham of Montgomery County, shared brief stories of the two of them traveling together; rejoicing in the humorous moments while becoming choked up when recalling how he and his friend attending the funerals of other law enforcement officers. Sheriff Cunningham’s grief was palpable as was his love for his dear friend.

Pastor J.D. Ruffin, Jr. of Mars Hills Missionary Baptist Church did an outstanding job of portraying the person Big John was with his family and coworkers through his eulogy. He also called for those in attendance to stand and give thanks to all of our law enforcement officers.

Another speaker likened Sheriff “Big John” to Andy Griffith and the small town of Hayneville to Mayberry. He had that kind of personality and care for those in his community.

Senator Doug Jones presented Big John’s wife with the American flag, which had most recently flown over the State capital. Several others, including the Alabama Boys, paid respect with beautiful, heartfelt songs.

The celebration of Big John was streamed live by several stations on television and the Internet. The live coverage of his service was a tribute to the man Sheriff “Big John” Williams was and allowed thousands more to join those at the Coliseum in remembering the life of Big John.

Wow I really know what it feels like to say it’s to hard to say goodbye to yesterday. We leave home daily in law enforcement trying to make a difference in our community and county. I lost a friend and the man that would give you the shirt off his back on Saturday, November 23. We traveled all over the USA together and we talked everyday. I look at the good times we had in my photos fighting back the tears of a broken heart.

I leave you with this “Blessed are the peacemakers for they will be called children of God.” He will truly be missed.

Love each other as I have loved you.”

13 “Greater love has no one than this:

to lay down one’s life for one’s friends.”

Our prayers go out to the Lowndes County Sheriff's Office.

Please pray for the family and work family of Sheriff John "Big John" Williams who ended his watch in the line of duty.