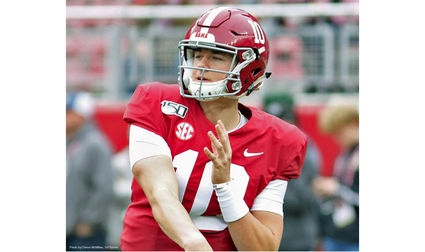 In the April 2019 edition of the Alabama Gazette, the following article appeared... Ed Jones pre-season predictions...and, boy, were they on target!

Take a minute to review what Jones said in April...

There is no controversy this year in Tuscaloosa as to who the quarterback will be. Tua Tagovailoa will be at Alabama at least one more year. The runner up for the Heisman trophy is well entrenched as the Alabama quarterback for 2019. The real problem at quarterback is who will be Tua’s backup. Mac Jones, a 6’- 2”, 205 lb. sophomore was number three last year. Gone is the multi-talented Jalen Hurts. He will be vying for the Heisman as the quarterback of the Oklahoma Sooners, who have produced two Heisman winners in the last two years. Last year Alabama had a perfect situation. With Hurts backing up Tagovailoa, there was never a worry about the position. Not so this year.

Alabama’s biggest problem is with the back up quarterback. Think about last year. When Tua went down, Hurts came up and the Tide did not miss a beat. Jones would have to be the man if Alabama had to play a game this spring. He will hold on to his spot through the spring game. However, Jones does not have the talent level of Jalen Hurts. Tua will get hurt. Alabama must have the answer to the backup job by the second week of fall practice. It may be Jones or it may be one of the talented freshmen coming in.

The only other real problem that Coach Nick Saban has is how to build his offensive line. Junior All-American left tackle Jonah Williams opted for the NFL. To compensate, Saban moved junior Alex Leatherwood from right guard to left tackle, a position that he has played before. This allows senior Matt Womack, who started 14 games at tackle in 2017, to move from tackle back to right guard. Right tackle is in the capable hands of Jedrick Wills, a 6’- 5”, 310 lb. junior, who started last year at right tackle. So, the problem is finding a left guard and a center. Ross Pierschbacher, an excellent guard on Alabama’s 2017 team was moved to center last spring. He never did play up to the standard set by other Alabama centers in the past.

Pierschbacher graduated and will be on an NFL roster this fall as a guard. He started 57 games at tackle, guard and center, so his leadership will be sorely missed.

Redshirt junior, Chris Owens has never started a game, but was the backup center in 2018. He is being counted on to move into the starting job this fall. His improvement over the last three years has been excellent. Another possibility at center is redshirt freshmen Emil Ekiyor. He is currently spending the spring at left guard and center. One of these linemen will be the center. The good news is that true freshmen Evan Neal is talented enough to move into the left guard spot giving Alabama two centers with potential. Neal can move his 360 pounds around very well. It is a good bet that he will not be redshirted. His presence is needed now. With these problems solved, Alabama will be good enough to challenge the best in 2019.

Auburn is in a similar situation that they were in for 2015. Georgia transfer quarterback Nick Marshall had led Auburn to 21 wins the previous two years. The best replacement for Marshall was expected to be Jeremy Johnson, Mr. Football in Alabama in his senior year at Carver High School. In fact Coach Gus Malzahn told the media during his sophomore year that Johnson was a Heisman Trophy candidate. Johnson’s talents did not fit the offensive system that Malzahn wanted to run. At that juncture of Malzahn’s career, his offense was predicated on the threat of the quarterback being able to run the football when executing the zone read offense. Johnson was a 6’ - 6” gun slinger who slung his passes with authority, and with the velocity of a pro-style quarterback. However, Auburn was not blessed with pro-style receivers. In addition, Johnson had the propensity to sling balls to his players and their players with the same aplomb. He also was not a good runner. So, the zone read offense lost one-half of its effectiveness with Johnson. Therefore, the running backs were devoured at times by the opposition. The result of this experiment was a constant change of quarterbacks during a dismal two years for the Tigers.

The similarity to that situation this year is that Auburn has a freshman quarterback, Bo Nix, who was also Mr. Football in Alabama. He played high school football at Pinson Valley High School. His coach was his dad, Patrick Nix, who was Auburn’s starting quarterback in 1994 and 1995. Unlike Jeremy Johnson, Nix has developed a coach’s mentality through his years of living football with his “poppa”. That will serve him well in his playing career. Nix is a 6’ - 2”, 210 lb. multi-talented athlete who will stretch a defense with his ability to run and pass effectively.

Nix has not been mentioned as a Heisman Trophy candidate yet. Coach Malzahn probably learned a valuable lesson at Auburn’s expense with his handling of Jeremy Johnson. Nix has not been handed the baton from Jarred Stidham. The freshman will have to climb over three other quarterback candidates. “Ole Folks” Cord Sandberg is pushing for playing time. Sandberg is a very interesting prospect. When he graduated from Manatee High School in Bradenton, Florida, he chose a professional baseball career over football. After six years of minor league ball with the Philadelphia Phillies organization, he decided to give up that dream and chase another dream, Auburn quarterback. The 6’ 3”, 215 lb. Sandberg is twenty-five years old now. That is a little old for college, but is just the right age for a young quarterback in the NFL. So, he may be reaching his prime potential athletically this year. He will certainly have the maturity factor over all the other quarterback candidates. We will get a good look at Sandberg in the spring game. Don’t count him out.

If the coaches could choose a quarterback by the way he runs on the field, they would certainly pick Joey Gatewood. Joey is a 6’ - 5”, 240 lb. redshirt freshman from Bartram Trail High School in St. Augustine, Florida. Optimistic Auburn folks think he may be another Cam Newton. Don’t count on that. He does resemble Newton, same weight, same height, handsome face. That’s probably where the comparison should end. He is no Cam Newton. However, he has every tool in the tool box in order to be Auburn’s quarterback this year. He can run. He can throw. He is smart. He is tough enough. The question is, can he use his God given abilities on the field against the likes of LSU, Georgia and Alabama. We will not know his real chances until after spring practice. He would be a good specimen to throw out there in September against Oregon. It could happen. He has sprinter speed. Is he quick enough to run Malzahn’s zone read offense? Probably!

The heir apparent to Jarred Stidham, who will be on an NFL roster in 2019, is a 6’ - 1”, 195 lb. junior, Malik Willis. He has been Stidham’s backup for two years. He is equally gifted in running and throwing, which should endear his talents to the read option offense. However, in two years as the backup quarterback, Willis has not shown exceptional ability to run Auburn’s offense. He is coachable, quick and experienced. If Auburn played in April, he would have to start. Willis now has the job. Whether he can survive the four quarterback playoff this spring is questionable. His best trick is running with the football. I know that I’m not as smart as Coach Malzahn, but I would move Willis to running back after spring training. This move would beef up a weak position. It would also give Willis a chance to do what he does best, run the football. There are three talented quarterbacks on the roster other than Willis. Malik Willis is not the future of Auburn football. It would behoove Coach Malzahn to quit wasting Willis’ time at quarterback.

No matter what happens this spring, quarterback is not the biggest problem facing Malzahn. There is no linebacker letterman coming back. All three positions must be built from scratch. It can be done. Although Deshaun Davis, Auburn’s middle linebacker played as hard and as well as he could in 2018, but he was just an ordinary linebacker in the SEC. He will make an NFL roster through grit alone. Auburn will have to count on redshirt freshmen and true freshmen to fill this void.

The Auburn secondary must be shored up as a result of graduation and early defections to the NFL draft. There is talent there. Immediate help from a freshman would stabilize this vital part of any defense. Coach Kevin Steel is good. But he is not a magician. Young players have to come through.

The running back situation is also perilous. “BooBee” Whitlow carried all the load last year because there was no one else to call on. Whitlow is a tough inside runner, but he is just an average SEC back. Freshmen will shore up the position, but Whitlow needs help.

It will be very interesting to see how the “four quarterback derby” ends. Somebody has got to come out of spring as the best quarterback to start against Oregon. It will not be Malik Willis!

As mentioned in April, Tua Tagovailoa went down late in the season. Mac Jones had to bear the load for the Alabama offense. He played in the Iron Bowl as well as he could, getting no help from the sidelines. Jones was just not ready for “Prime Time”. Alabama threw the football way too much. Najee Harris, one of the best backs in the country, ran the ball way too little. Result; 48-45. Gus Malzahn is now 3-4 against Saban. Nobody can match that.