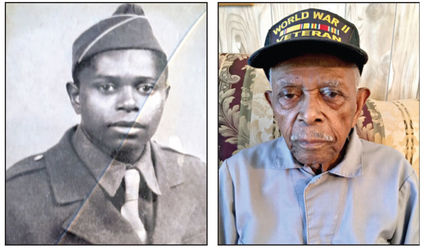 Whetstone was born January 2, 1920, in Weoka, a rural community in Elmore County, AL, to his parents, Theophilus Walton Whetstone and Ethel Wood Whetstone. He completed grades one through eight at the local Antioch School and graduated from Eclectic High School in 1936.

Whetstone engaged in farming with his father until he was drafted in January, 1942, into the U. S. Army. He reported to Anniston, AL, to Atlanta, GA, and then to Ft. Knox, KY, where he was put in charge of armor for over one year where he oversaw the repairs to guns. Whetstone was then sent to Ft. Bragg, NC., and then to OK, where he joined the 525th Field Artillery. He was sent to Ft. Lee, VA, and then sailed to Naples, Italy.

Whetstone survived injuries during combat in the Apennine Mountains and the Po Valley; however he vividly recalls the instant death of a solder next to him. One day while eating breakfast, an enemy shell exploded near him and others. He jumped up and shouted, "You missed me, and I am going back to Weoka!" The Italian Campaign was the most costly in terms of casualties lost by the Allies and the Germans during WWII. The German Armed Forces surrendered in Italy in May, 1945.

Whetstone recalls that his unit moved out of the mountainous area when President FDR passed away. After the Germans surrendered, for 85 days, he was engaged in salvaging equipment and taking German prisoners back to Germany via trains. Whetstone returned to America and was discharged in December, 1946, having served almost five years.

After retuning home to Weoka, AL, he resumed farming raising cotton for two years. Whetstone worked at the munitions depot where ammunition was made and prepared for the military in Anniston, AL, for over four years. Whetstone resumed his military service joining the AL Army National Guard working at its headquarters in Montgomery, AL, retiring as the Supervisor of Armaments for the Army National Guard November 2, 1980, with almost 30 years of military service including his service with the regular Army during WWII.

Whetstone was married to his wife, Hazel, 44 years before she passed away. They had four children, seven grandchildren, 10 great-grandchildren and one great-great-grandchild. His wife, Bertha, and he have been married for 29 years. Whetstone built the house in which they live. They have enjoyed traveling to each of the United States and to foreign countries. They have been active members of the Trinity (Carolina) Methodist Church where they cleaned out the cemetery and served the community and the congregation.

Whetstone concludes about his WWII combat experiences saying, "It made a profound difference to me. It taught me that we were not all that smart. I respect the military."

Sylvester Cannon is a U. S. military veteran who served in the Army for 10 months January 8, 1946, until December 13, 1946. This service followed the surrender of the Germans to the Allies May 7, 1945, and the Japanese September 2, 1945. He refers to his Army service in Munich, Germany, as "clean-up" during the early post WWII occupation. Cannon received the following medals: European African Middle Theater Ribbon, Good Conduct Medal and National Defense Medal.

Cannon was born in Dozier, AL, July 15, 1926, to his parents, Sam and Susie Cannon. He was reared in rural Butler County, AL, and was drafted into service with the Army at age 18 before finishing high school; however after military service in the Army, he received his High School Diploma and studied briefly at Alabama State University.

Cannon was recalled to active duty; however, when given the opportunity to choose which branch of the military that he preferred, he selected the U. S. Air Force in which he served three years. In 1952, when he was recalled for service with the Air Force, he worked as a cook at Gunter Field which is now named Maxwell Air Force Base: Gunter Annex at Montgomery, AL. Following that, he served in the Air Force Reserves and then in the Alabama Air Force National Guard. MSgt. Cannon retired from all military service July 15 ,1986, with a full military pension.

Since retirement from military service, Cannon worked in the U. S. Postal Service at Gunter Annex, Montgomery, AL, delivering mail throughout the military base. Cannon is a 33rd Degree Free Mason. Cannon is an avid bowler and has won numerous bowling trophies. He has served as a deacon at the Mobile Heights Baptist Church in Montgomery. He and his wife, Alma, were married 55 years before she passed. They had three children, five grandchildren and six great-grandchildren.

MSgt. Sylvester Cannon reflects upon his military service saying, "It was a good experience. I was happy to serve my country."

Command Chief Warrant Office /CCWO Dudley Frank Christian is a valiant U. S. Army veteran who served 32 years including a tour of duty as a helicopter pilot in Can Tho, Vietnam. His helicopters were shot down twice in the midst of heavy enemy gunfire during combat assaults and during numerous flights into

Cambodia searching for the enemy, yet he survived these harrowing ordeals and continued to serve his country.

Christian was born February 6, 1950, in Louisville, KY, to his parents, William Raymond Christian and Joanne O'Brien Christian. Christian comes from a family who has served in the U. S. military; his father, father-in-law, and two uncles served in WWII and Korea. His mother worked as a nurse at a VA Hospital. Because of his parents' work schedules, during his childhood, he spent much time with his paternal grandparents in Morehead, KY. He graduated from Waggener High School in St. Mathews, KY. He married his wife, Faye Roberts, shortly after graduation, and they had two sons, Brien Layne Christian (deceased), and Elijah Ray Christian who is a Wetumpka, AL Police Sargent. Elijah continues the family's service to God, country, and the community.

Christian's military service began in 1969 when he volunteered for the draft hoping to be able to have more opportunities to select the Army's military specialty occupation that he preferred which was to serve as a helicopter pilot. He graduated from Basic Training at Ft. Knox, KY, as an Honor Graduate and holder of the highest Physical Training Score which gave him an accelerated promotion. Christian was selected to attend crew chief door gunner schools at Ft. Rucker, AL, then on to Airborne Paratrooper training at Ft. Benning, GA. He applied for Warrant Officer Flight Training and was approved by a Board of Colonels to attend helicopter flight school. Christian completed primary helicopter flight training at Ft. Wolters, TX, before attending advanced helicopter flight training at Ft. Rucker, AL. Christian was then sent to the Republic of South Vietnam to join the 162nd Assault Helicopter Company as a pilot where he earned thirteen Air Medals before being medevaced back to the United States. After he convalesced from his injuries, he was stationed at Ft. Campbell, KY. Mr. Christian attended the first Army Air Assault School there at Ft. Campbell as part of the 101st Airborne (Air Assault) Division. Many other duty assignments followed. He was chosen as the first full time Command Chief Warrant Officer ever in the United States Military by Major General Clyde A. Hennies in 1996 and served at that distinguished position until his retirement in 2001 when he was awarded the Legion of Merit award issued by the U. S. Army and presented by Major General Willie A. Alexander. Mr. Christian had served his country for 32 years and retired as a Chief Warrant Officer Five, the highest rank in the Warrant Officer Corps.

Since retirement, he graduated from Faulkner University with a B.S. Degree and a Master's Degree in Business Management. He also attended Jones Law School for two years. He worked across the U.S.A. as a U.S. Government Contracting Officer before retiring from government service.

Chief Christian is a devoted American who vigorously supports his country and is prepared to defend it against all enemies or detractors. He states, "I was born a patriot, raised a patriot, and will die as a patriot." He and his wife started out with nothing. Christian considers this Army wife his heroine. "I love her so, and I wanted to make her proud. It was a good life. There were tough times, but we persevered. The geographical separations were really hard." Linda Faye Roberts Christian, Dudley's wife and he just celebrated fifty-one years of marriage.

His mother quoted words to him from the Bible's book of Deuteronomy 28:7: "The Lord will grant that the enemies who rise up against you will be defeated before you." These words sustained him and provided much comfort to Christian when he was in combat in Vietnam and throughout his military career.