There is Never a Wrong Time to do the Right Thing 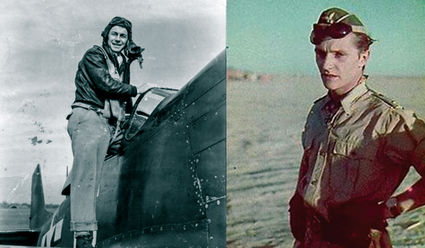 If you have been reading my column long enough, I am sure you already know one thing for sure; I love WWII history. Whether talking to folks at Orange Theory, meeting a new First Officer or basically most people I come into contact with, they quickly realize this. Give me WWII, airplanes, German Luftwaffe, British Royal Air Force, or the USAAF and I am happy as can be. With that love of history, unfortunately often comes disappointment. Something or someone I may have held in high esteem, through their actions or inactions, leaves me with a terrible taste in my mouth or a long-held belief is shot down in flames. That is one of the things that I actually love about history. Case in point, a couple of weeks ago I was watching the Smithsonian Channel special titled, “Black in Space” about America’s first Black astronauts. If you have On Demand or can catch the show, I highly recommend it. I love learning new things and this show did not disappoint.

This was a most interesting show and I have to say, “Boy, do we have a checkered racial past in this country.” I am not talking about the obvious cases or as some might call it “ancient history,” but the blatant “crimes” that existed well into my lifetime. As a self-professed WWII historian, whenever I talk with people about race relations inside America, there is one sentient date for me and that is 6 June 1944. Why this date? Easy. It was D-Day. It was the day that the Western forces stormed the beaches in Normandy, France to help liberate Europe, defeat the evil Nazi threat and wipe their ideology from the planet. In respect to American race relations, I use this as a pivotal date in which I can clearly point to incredible ignorance and hypocrisy inside America. For example, it took 8 years from this date for the U.S. Military to fully integrate (not talking about executive order 9981 forbidding discrimination), 16 years for the University of Tennessee to integrate, 19 years for the University of Alabama, 20 years for Auburn, 23 years for all states to legalize interracial marriage and a whopping 28 years, 1972 for the SEC to fully integrate their football programs. This sad list goes on and on. We were fighting to save the world from evil in 1944 but fighting to keep our own abhorrent, racially discriminatory institutions, laws and practices intact. It actually makes my stomach turn when I think about it. It’s that whole “before removing a speck from your brother’s eye, first remove the log from your own eye,” thing. For crying out loud, that Smithsonian show taught me that the friggen communist Russians put a Black man in space three years before we did. What the heck is that about?

Anyway, our first Black candidate was Air Force pilot Captain Ed Dwight. As a side note, if you are interested, Google Dwight and look at his incredible sculptures. He is quite a highly recognized artist now. Long story short, apparently Dwight’s main nemeses and obstacle to getting into space was American WWII fighter pilot, test pilot, legend and national hero Chuck Yeager. According to the show while referencing some of his own memoirs, Yeager apparently did not believe Blacks should be astronauts and clearly lied and did his best to have Dwight removed from the program. Yeager claimed Dwight, who graduated cum laude in aerospace engineering from Arizona State, was “slow,” could not keep up academically and needed special tutoring. In an interview with Dwight, he said that was a lie; I believe him. Dwight was no dummy and he eventually finished 8th out of 16 in his test pilot class Aerospace Research Pilot School (ARPS). The reality is that at these levels, the people are so evenly matched, I would not be surprised if less than 2-5 points separated all those men. Although finishing 8th, NASA, also skipping an opportunity to do the right thing, did not select Dwight but selected the others in the class. So to imply that Dwight was “slow” and could not keep up is misleading and clearly Yeager was lying – again. If Dwight needed extra help and tutoring, what about the next 8 guys in line behind him? According to the documentary, Yeager said if they let a Black man into the space program, NASA would become a Black program. Oh my, and they might even end up talking to White women! Yeager is also reported as saying, “Why in hell would a colored guy want to go into space anyway? And if it was left to me, you guys wouldn't even get a chance to wear an Air Force uniform.” (https://en.wikipedia.org/wiki/NASA_Astronaut_Group_3) That makes this comment a bit personal to me. Yeager as a male sexual organ is the image that comes to mind right about now.

It reminds me of the story of when Colonel Benjamin O. Davis, commander of the Tuskegee Airmen had to fight for their survival in D.C. When faced with his unit being withdrawn and sent back home, Davis was asked by a Senator why Davis’ men had yet to score any aerial victories while every other unit had scored many. Davis’ straight and in your face answer was along the lines of, “Well, Senator. You have placed our Group in an area of North Africa where we have yet to even see any enemy aircraft. . .” Duh! In other words, Colonel Davis, how dare your group have no aerial victories although you have not even engaged enemy aircraft in combat.

I had always read that Yeager could be difficult. But now I see him as a racist, bigoted jerk who knew better. There is a saying from the movie Tin Cup where Kevin Costner says, “When faced with a defining moment, either you define that moment or you let that moment define you.” At this point in time, Yeager could have looked at the writing on the wall and said, “You know what, this racism stuff is stupid. These guys can fly. I’ve seen it. I am going to make a stand for what is right.” Instead he took the low road, crawled under the proverbial bar and said, “You know what, no matter what, I don’t like these guys or their kind and don’t believe our country has an equal place for them. So even if they are more than qualified to compete for every flying job out there, I am going to use my celebrity status and my back wood West Virginia blinders to impede the rights of other Americans. That is just how I roll.”

Yeager saw first-hand what Blacks could do in the airplane in both combat and peacetime operations. Yeager had to know it was the Tuskegee Airmen who won the first USAF Fighter Gunnery Meet in 1949 although the Air Force buried that reality for almost a quarter century. Although a very good pilot and one who will go down in history for his achievements in the air, in my book Yeager allowed his own myopic, racist, prejudiced world view to forever define him and that moment in 1963 as a little man with a crappy attitude.

Although not surprised, I was disappointed; very disappointed. Yeager should have known better but could not get out of the way of his own “stinking thinking.” He had an opportunity to stand for something beyond himself but just couldn’t pull it off. Obviously, he had too much prejudice and hate coursing through his veins. Some people who I have discussed this story with have fallen back on the old, “You have to understand, it was a different time.” No, I don’t have to understand anything of the sort. That is easy to say when you and your ancestors were standing on one side of the fence and mine were on the other. My father, one of the smartest men I have ever known could not go to his college of choice, the University of Tennessee, the land where he was born and raised, only because he was Black.

In my days of WWII research, I have sat in the living rooms of many an old Luftwaffe veteran and never once were they anything but polite, professional and always asked me to come back and visit. I became great friends with one of them until the day he died and to be honest, I have been treated better by those veterans than many from this country. Yet we are to believe they were all evil Nazis, right? Not true. Not hardly. Clearly many were but not all. After watching the show on Smithsonian, one word that comes to mind when I think of Yeager now is “Jerk!” No, there is never a wrong time to do the right thing. After watching the special, I feel even less guilty by saying that had my guy Hans Marseille met Yeager in combat, another American would have broken the sound barrier.

I wasn’t going to put this in here but at this moment, I don’t care. My fingers won’t stop typing. When I look at Chuck Yeager and German fighter pilot Hans-Joachim Marseille and compare their combat records, there is simply no comparison. Then when I examine what both men stood and fought for, and clearly Marseille fought for the other side, but in many ways, he was much more of a man to be admired than Yeager ever was. Where Marseille was more of a classic Renaissance man devoid of racial or religious prejudices, Yeager was a racist segregationist; and yes, wanting to keep Blacks out of the Air Force makes him a segregationist. Where Yeager rolled with and promoted the prevalent racist norms of the time, Marseille actively butted with Nazi leadership, to include Hitler himself, through words and actions at extreme personal risk, in demonstrating the folly of racial and religious bigotry and condemnation. The man never joined the Nazi party, never ascribed to their doctrines and here I am 75+ years following his death, extolling praises in parts of his character far in excess of a bonafide American hero that did not think enough of Black aviators to even want them to wear the same uniform he did. Ain’t that something? Again, this is one reason I love history so much; no matter how painful it might be.

No, there is never a wrong time to do the right thing.

For the first time in the history of mankind, history is not maintained solely by the winners History now has to answer to the truth. Thank you

Great article Rob. Changes my view of Yaeger also. Thanks for sharing these insights. As you said, No, there is never a wrong time to do the right thing. Keep writing and speaking my friend.