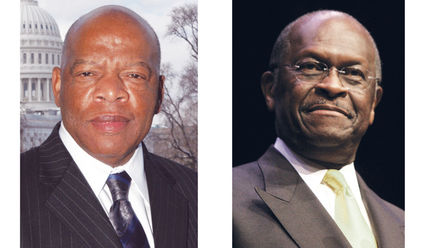 Representative Lewis was the last of the ”Big Six” that led the Civil Rights movement of the 1960s and beyond.

A weeklong memorial culminated in an Atlanta service on Thursday, July 30, where he had represented the 5th Congressional District of Atlanta for more than 30 years.

However, his final journey began in Troy. Family and friends from the Troy area paid their last respects to Lewis on the Troy University campus, the first stop of a week-long celebration of his life. Dr. Jack Hawkins of Troy University spoke fondly of the man that the University had denied admission to back in 1957. He reminded the audience that Dr. Ralph W. Adams rectified that action by awarding him an honorary degree from Troy in June of 1989 soon after Lewis had been elected to Congress to represent Atlanta. It was one of the first of many degrees bestowed on Lewis including others from such prestigious institutions as Harvard and Princeton. Lewis graduated from Fisk University with majors in Religion and Philosophy. He also graduated from the Baptist Theological Seminary. He was a practicing Christian.

In 2006, the Hall School of Journalism awarded Lewis the Hall-Waters Prize for Excellence in Southern Writing for his memoir, “Walking in the Wind.” His final visit to Troy came in 2018 when a marker was placed in his honor, recognizing his many contributions. Many accolades describe Representative Lewis, but Roll Call magazine, described him as, “A genuine American hero and moral leader who commanded widespread respect in the chamber.”

Many of his family still live in Troy. Several sisters and brothers spoke of their fond memories of “Robert” (which is what the family called him) and his penchant for getting into “good trouble.” Many remembered Lewis for his kindness and reaching out to others. His sister, Rosa May Tyner, proudly proclaimed that it was her brother’s mission to attack injustice wherever he found it. Mary Davis, a Troy resident and friend of the family might have summed it up best, “The kind of man that he was is the kind that God intended everyone to be – to stand up for what’s right.”

Herman Cain Passes away at 74

Former Republican presidential candidate, Herman Cain died July 30, 2020 due to complications from COVID-19, he was 74.

He graduated from Moorehouse College in Atlanta with a B.S. degree in Mathematics. He got a master’s degree from Perdue in computer Science while working full time for the Navy. He was staunchly conservative, pro-life, and pro-business.

Cain was a successful businessman, with a syndicated column and being a frequent television commentator for many years. He began his career with Coca Cola and Pillsbury soon becoming the director of business analysis. He served as the Chairman of the Federal Reserve Bank in Kansas City and steered once struggling companies like Godfather’s Pizza and Burger King into profitability. Cain also served as the President of the National Restaurant Association in the 1990s.

He first ventured into the political arena by serving as Senator Bob Dole’s senior advisor for Dole’s 1996 presidential campaign. Cain may be best remembered as a Republican presidential candidate in 2012 where he garnered the support of the Tea Party Express.

Cain served as an associate minister in Antioch Baptist Church North, Atlanta, which he joined at age 10.

He wrote several books including “Speak as a Leader,” “CEO of Self” and his memoir “This is Herman Cain,” which espoused his business and political beliefs.