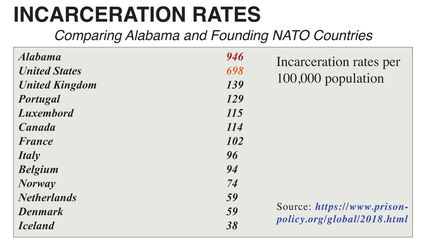 By now, most of us have heard about Governor Kay Ivey’s September 3 proposal to build three new mega-prisons, ostensibly to solve Alabama’s long-standing prison overcrowding problem once and for all. The new prisons are planned for Bibb, Escambia, and Elmore Counties, with construction beginning in 2021. Their total capacity will be 10,000 male inmates. For a minimum of 30 years thereafter, the state will be obligated to shell out $88,000,000 of our tax revenue to lease them.

Before we build more prisons, let’s ask ourselves why our prisons have become overcrowded in the first place. After we crunch the numbers, we can see that we actually have ample prison space in relation to our population. The real problem is that we have a grossly disproportionate percentage of our population behind bars. Alabama has literally become a prison state. And the proof is right here.

In one quick glance, we can see that the United States has an outrageously high proportion of its citizens in prison—698 people out of every 100,000—five times that of the nearest runner-up, the UK, and seven times the median of the world’s civilized nations, which is about 100. Why?

WHY do we have so many people locked up? Have we become a gulag archipelago? Is Kay Ivey following the footsteps of Joseph Stalin and Kim Jong Un? Are you beginning to feel like a Jew facing the birth of the Nazi Party? Are you ready to move into your new concentration camp?

In this country, prisons for profit have become big business. Build more and bigger prisons. But to be profitable, they have to be filled. So we arrest and incarcerate more and more people for more and more frivolous “offenses.” We then loan them out to work for a fee, which is typically little if any above the minimum wage. Of that, the prison gets the lion’s share. The prisoners might get a few pennies on the dollar, if anything at all.

One problem is the Habitual Offender Act, which was created by “Lock-em-up Charlie” Graddick. Commit three felonies, and you are put away for good—to rot in prison for the rest of your life—and during that time be subjected to violence, homosexual rape, and even homicide from other inmates.

Offenses like these, of course, are class “A” felonies that deserve serious time in the slammer.

But today, we have an entire menagerie of felonies that have no victims and harm nobody. And what is really insane is that many of these victimless “crimes” carry more severe penalties than most of the serious crimes listed above.

To have a bona fide crime of any kind, we must first have a victim—a person who has suffered either bodily harm or loss of property from the willful and deliberate action(s) of one or more other persons. If there is no bodily harm or property loss and no willful attempt or malice to cause it, there is no crime.

The fundamental cause of our insane incarceration rate is recreational drug prohibition. We all learned in our history that alcohol prohibition was a social and criminal disaster. It took eleven years for the American people to comprehend its gravity and repeal it. But we have come right back and imposed drug prohibition and enforced it for decades, with more and more severe penalties. When will we get over that?

Various sources clearly state that most of the people in our prisons were convicted and sentenced for buying, selling, using or just possessing even small amounts of “controlled substances.” Many prisoners are locked up for marijuana alone.

Why do we incarcerate people for actions between consensual adults? Why do our governments meddle with people’s personal and private interactions?

Take Amsterdam, for example. There is almost no crime there. Very few people are in jail or prison. Want to puff some “weed?” Go ahead. There are plenty of public places where any adult can do that, along with other drugs.

And did you know there are plenty of prostitutes available? And did you know they even publicly display themselves in store windows? Welcome to Amsterdam. Have a good time. Walk the streets safely at night with not a hint of crime anywhere.

The Netherlands and most of Europe in general have little crime. Police do not pursue victimless offenses. Mind your own business, and the police will mind theirs—to keep the streets safe from thieves and thugs—to perform their duty as peace officers.

So how do we fix our prison overcrowding? In truth, the answer is very simple: Release those who have committed only victimless “crimes”—drug possession, use and sale, prostitution, pornography, etc. If there are no identifiable people who have suffered bodily harm or loss of property (i. e. victims) and no willful actions to do so, then they should be released.

Police made 2,351 arrests for marijuana possession in 2016 (the last year data was available) along with thousands more for intent to purchase or for drug paraphernalia. Marijuana prohibition costs the state and its municipalities an estimated $22 million a year. We could end this outrage by legalizing marijuana and repealing our abusive anti-drug laws. So far, 33 states have legalized medical marijuana. Of these, 11 have also legalized recreational marijuana.

We could go even farther—legalize all recreational drugs. End ALL drug prohibition. If they were legal and cheap, the drug cartels would go out of business. That would free up our police to do their real job—stop and fight genuine crimes.

People should be trusted to behave like adults, assume their own responsibilities, and take their own risks without “Big Brother” looking over their shoulders. People who abuse drugs should be left alone to suffer their own consequences. Only when they commit crimes to support their habits should they be prosecuted and incarcerated.

But sadly, here in Alabama, felony pot possession convictions continue. Our courts are still loaded with thousands of cases that result in 900 to 1,200 unjustified convictions every year. Meanwhile, the courts never have enough time to deal with the serious crimes.

How can anybody tolerate such cruelty? The purpose of any prison is to keep thieves and thugs off the streets, not violators of abusive laws that prohibit peaceful interactions between adults.

Finally, some people are beginning to take action. Both the Southern Poverty Law Center and the American Civil Liberties Union are planning to slap Ivey and her prison industrial complex associates with some serious litigation. We’ll have to wait and see how that works out.