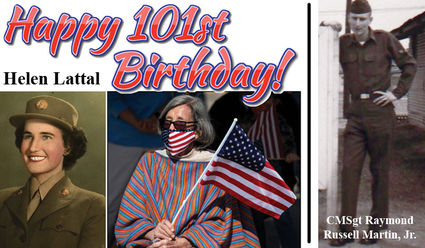 A 101st Birthday Drive-by Parade for Helen Lattal, a WWII WAC, was held January 4, 2021, in front of the Central-East AL Chapter of the American Red Cross. The parade was led by representatives of the Montgomery Police and Fire Departments, and other participants including Dr. Amir Farooqi, Director of the Central AL Veterans Health Care System, Admiral Kent Davis, Commissioner of the AL Dept. of Veterans Affairs, members of the Peter Forney Chapter and the William Bibb Chapter of DAR, members of St. Marks Episcopal Church of Prattville, members of the Buffalo Soldiers Club of Montgomery, residents of Oak Grove Inn and others from the Montgomery area. Proclamations and citations from AL Governor Kay Ivey and Montgomery Mayor Steven Reed were presented to Lattal.

Helen Lattal’s story of service was in the December 2018 issue of the Alabama Gazette. Below is an excerpt along with a link to the full story online (PDF).

Helen Lattal is a veteran of the Women’s Army Corps (WAC) having served with 8th Air Force Headquarters at High Wycombe, England. Her three years of service were 1942-1945. Not only was she active in the Selma, AL, community for many years, she also served three terms as the Commander of American Legion Post 20. She is well known in the veteran community and is a very passionate patriot. A special article about Helen was published by the Selma Times-Journal on Wednesday, January 14, 2004. ...

... Having learned the secretarial skills of bookkeeping, verbatim shorthand and typing at Moody’s Secretarial School in Connecticut where she won ribbons for her speed and accuracy in typing and taking shorthand, she was well prepared to handle such work. Helen worked for the draft board in Connecticut, and after Pearl Harbor, many volunteers came to the office where she interviewed them. In May 1942, the Women’s Army Auxiliary Corps (WAAC) were started. Helen volunteered to serve because of the Japanese attack on Pearl Harbor. She went to Ft. Devens, MA, to be assigned secretarial duties. She reported for active duty January 9, 1943, at Ft. Des Moines, Iowa, followed by basic training. Read full story here: https://www.alabamagazette.com/home/

CMSGT Martin was born to his parents, Raymond Russell Martin Sr. and Edith Martin, October 15, 1938, at Cranston, RI, was reared there and graduated from Cranston High School in 1957. He volunteered and entered military service in the United States Air Force in 1958. At Lackland Air Force Base (AFB), TX, he completed Basic Training and was selected to serve in computer technology after he scored well on an aptitude test. CMSGT Martin spent his entire Air Force career in computer technology at each duty station. His technology career started at the beginning of such technology when punch cards were processed to enter data using the 1050 UNIVAC, and computers were main frames taking up large spaces.

His military assignments as a computer operator took him overseas for over 11 years with the first deployment to Misawa Air Base (AB), Japan, for 14 months followed by deployment to Osan AB, Korea, for 10 months and returning to Japan to Yokota AB for three years. He was then assigned for three years to Plattsburgh AFB, NY, where the Air Force Strategic Air Command was located. His next overseas deployment was to Nakhon Phanom Royal Thai Navy Base for one year during the Vietnam War followed by assignment back to America to Webb AFB, TX, at a pilot training base for two years. He transferred to Otis AFB, MA, for two years and then to Gunter AFB, AL, for four years. His fourth deployment was for five years to Heyford, England, which was formerly used as a Royal Air Force Base and then used by the U.S. Air Force Strategic Air Command. He returned to America to serve at Langley AFB, VA, for two years and then to Gunter Air Force Base as the Systems Supervisor retiring January 31, 1988.

CMSGT Martin and his wife, Hiroko, were married 52.5 years before she passed away. They had three children, seven grandchildren and one great-grandchild. He is an active member of Frazer United Methodist Church where he has served as a Sunday School teacher in the Agape Class, in the Prayer Ministry and as a communion server. In the past, he enjoyed playing golf especially in Scotland when he was stationed in England, and today he enjoys spending time with his grandchildren.

CMSGT Martin’s conclusions about his military service are, “I was serving my country. It’s an honorable thing to do in my opinion. My children got to travel around the country and become mature.”