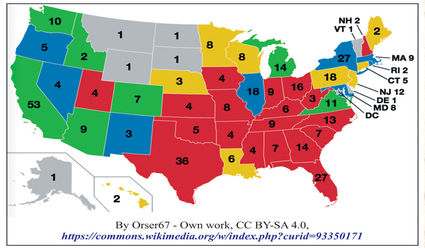 As we close the book on 2020, we will close the door on national politics and get back to the basics, good old Alabama politics. That's my game. It is what I know and like to write and talk about. Some say my prognostications and observations on Alabama politics are sometimes accurate. However, not so much so on the national level.

About a decade ago there was an open presidential race and a spirited Republican battle for the nomination had begun. One of the entrants stood out to me. U.S. Senator Fred Thompson from Tennessee looked like the real thing to me. He was tall, tough, articulate, a movie star, and major player in the Watergate hearings. He looked like a president. He had a deep authoritative voice and gravitas and he had done a good job as a U.S. Senator from Tennessee. He actually had been born in Alabama.

So I wrote a glowing column about how he looked like presidential timber. I went out on a limb and boldly predicted that he was going to win the Republican nomination and would go on to win the presidency. My profuseness was so pronounced that soon after the column was printed it was picked up by his campaign and his wife called me from Nashville and thanked me for my comments. A week later Thompson dropped out of the race. So much for my presidential prognostications.

The Governor and Legislature have a myriad of issues to tackle as the new year begins. A good many issues have to be addressed in the upcoming regular session, which begins in less than a month. The most prevailing problem is the fact that the U.S. Justice Department has sued the state for our overcrowded prisons. They convene in Montgomery the first week of February.

Many of the leaders of the legislature were hoping and somewhat expecting the governor to call a Special Session or two prior to the Regular Session. There are a lot of issues that have to be addressed and are delinquent due to COVID cutting the 2020 Regular Session in half and there is concern that COVID could kill part of this year's session. It will indeed make a precarious environment inside the Statehouse. There are economic development bills that need passing and a ton of local bills legislators need to pass for their districts and then there are big ticket items like the prison problems.

Regardless of how important all of the substantive state issues are, nothing will be as paramount to legislators as reapportionment or the redistricting of their own districts. Self-preservation will prevail. The United States Census is taken every 10 years for a reason. The U.S. Constitution, and concurrently all state constitutions, mandate the count for one reason – to make all congressional and legislative districts have the same number of people. Thus the saying, "one person, one vote." The power of the pencil is granted to the state legislature to draw their own lines and the power rests with them to draw the congressional lines for the state. If indeed, we do lose a congressional seat, then that task becomes exponentially more difficult than if we had our current seven districts.

Drawing their own lines will be their primary interest. All 105 House members and all 35 State Senate districts will be drafted and designed by the legislature. Being on the Reapportionment Committee is a plum position at this time. Like most pieces of a legislative puzzle, the resolution to a large degree is accomplished by and within a committee. Every district will be reconfigured to some degree because people do move around and some locales change more than others. Therefore, there becomes a ripple effect all over the state. The Republicans have control of the majority and will use the legislative pencil to retain their super majority. However, protecting their own incumbency will supersede party loyalty. Although, both can probably be achieved.

This 2021 reapportionment is much more pressing than 10 years ago in 2011. They had the luxury of casually passing congressional lines for the 2012 elections. However, legislators did not run until 2014. So the Legislature passed a congressional map in 2011, and legislative map in 2012 at a leisurely pace.

Look for there to be two Special Sessions between now and June – one for congressional redistricting and one for legislative reapportionment.