Summiting Mount Everest: It Takes A Team To Reach Your Goals 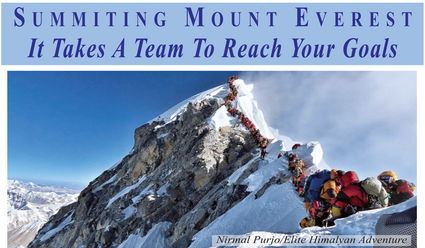 At 29,035 feet, Mount Everest is one of the most inhospitable places on earth. Everest is very remote and the altitude incapacitates all but the hardiest and most experienced climbers. On top of that the weather is ruthlessly unforgiving and extreme.

Because Everest is the highest mountain in the world, many have tried to summit the great peak. Between 1920 and 1952, seven major expeditions tried to summit Mount Everest and all of them failed. In fact, the mountain is littered with at least 120 bodies of mountain climbers who attempted to summit this peak so they might literally stand on top of the world.

Tenzing Norgay, a Sherpa born in the high altitudes of Nepal, had been drawn to the mountain since he was young. He joined his first expedition to Mount Everest in 1935. The first expedition that Tenzing was on only made it to North Col, which was an altitude of 22,000 feet. On this flat area between two peaks, they made a gruesome discovery. It was a wind-shredded tent with a frozen body inside. All that was left were the bones of a former climber with one boot off and the laces of the remaining boot between its bony fingers.

Only someone who has climbed a great mountain knows what it takes to make it to the top. Of the seven major expeditions between 1920 and 1935, Tenzing was on six of those expeditions. His fellow climbers joked that he had a third lung because of his ability to endure while climbing with heavy loads. Everyone respected him for his experience and tireless energy.

In 1953, Tenzing joined his seventh expedition to Everest with a British group led by Colonel John Hunt. By then Tenzing was a respected climber and mountaineer who was a full-fledged member of the team, an honor not normally given to a Sherpa. The year before he had climbed to a height of 28,250 feet with a Swiss climbing team. This was the closest anyone had ever been to the top of Everest.

For a climbing team with just 10 high-altitude climbers attempting to summit Mount Everest, it would take 200 to 300 people hauling the supplies on their backs just to get the gear, equipment and food to the base camp. It would take another 40 Sherpas with extensive mountain climbing experience to get the needed supplies further up the mountain. Only Tenzing and three other Sherpas would have the strength and skill to go to the high camps near the summit.

The team of ten climbers was divided into pairs who would possibly have a chance to reach the summit. Tenzing was paired with a New Zealander named Edmund Hillary and they were in Team Two. The first pair of climbers on Team One attempted the summit and failed to reach the peak. Tenzing described the first team as they returned from their failed attempt. “They were worn-out, sick with exhaustion and, of course, terribly disappointed that they had not reached the summit themselves. But still ... they did everything they could to advise and help us.”

Now, it was Tenzing and Edmund Hillary’s turn to try to reach the summit. They made the best of their opportunity.

On May 29, 1953, Tenzing Norgay and Edmund Hillary accomplished what no other human being ever had: they stood on the summit of Mount Everest, the world’s highest peak!

To reach our greatest goals and to fulfill our purpose in life, we cannot do it alone. We need other people to help us and empower us along the way.

They did it together and that was all they would ever say. Now that is what being a team is really all about. Its not about who gets the credit, it is about accomplishing the mission together.