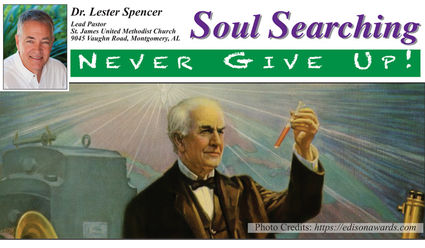 Can you name the person that Life magazine named the number one man of the past millennium? He had over 1,000 inventions and held more patents than any other person in the world – at least one every year for 65 consecutive years. Are any lights coming on? You guessed it – his name is Thomas Edison. We should give thanks for his genius every time we turn on a light or listen to recorded music!

Thomas Edison also said some remarkable things: “Genius,” he declared, “is 99% perspiration and 1% inspiration.” He believed in hard work and perseverance. After thousands of attempts, Edison still could not find the right materials for the incandescent light bulb, but he never doubted that he would find the right combination. He said, “Many of life’s failures are people who did not realize how close they were to success when they gave up.”

Look at this list of some of the amazing contributions of Thomas Alva Edison:

* Incandescent Light Bulb – “I have not failed, I’ve just found 10,000 ways that won’t work.” Though Edison did not invent the first light bulb, as most people believe, he did invent the first incandescent light bulb. Though prior bulbs burned out after only a few minutes, Edison’s incandescents were practical, staying lit for hours and hours, and amazingly are still in use today after over 135 years.

* Electricity – “There are no rules here – we’re trying to accomplish something.” Thanks to Edison’s dynamo technology, devices similar to generators, which make direct current (DC) electricity with the help of electromagnetism, a complete system was created capable of delivering DC electricity to large areas. In 1882, the formation of the Edison Electric Illuminating Company of New York, constructed the first commercial electricity generation and distribution system. It powered a one-mile square of residences and businesses in Manhattan, offering Americans more affordable, efficient electricity and lighting.

* Phonograph – “Opportunity is missed by most people because it is dressed in overalls and looks like work.” One of Edison’s favorite inventions, the phonograph, revolutionized sound recording. Though devices existed capable of recording sound, none had the capability for playback, as Edison’s 1877 phonograph did. The two needled device – one for recording and one for playback – led to the development of recorded telecommunications, improvements in dictation and letter writing, phonographic books for the blind, music boxes and toys, and music portability.

* Alkaline Batteries – “Genius is one percent inspiration and ninety-nine percent perspiration.” After thousands of experiments involving metals and other materials in an attempt to create a lighter, reliable, more powerful storage battery for the electric cars of the time, Edison discovered an alkaline solution, which produced a longer lasting battery. Though gasoline powered cars took over the market before the battery’s completion thanks to Henry Ford, it was nevertheless hugely successful in industrial applications and one of Edison’s biggest moneymakers in later years.

If Thomas Edison had viewed failure as most people do, we might all still be in the dark. Thanks, Mr. Edison, for empowering us all, and to everyone else; always remember: Never Give Up!