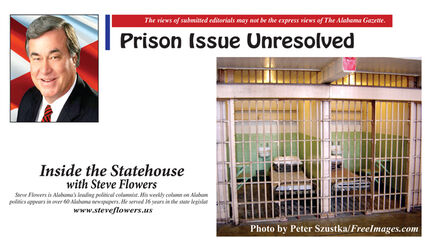 There were two major issues not resolved during the just completed regular legislative session. Gambling and prisons were left on the table and up in the air.

It is foolish to not address a resolution to get some revenues for the state from gambling, which currently exists in Alabama. However, it is not imperative that the problem be solved.

It is happening now in California, and the same scenario happened in Alabama five decades ago during the George Wallace versus Frank Johnson era. Judge Johnson prevailed and told Alabama what to do with prisons and sent them the bill.

The legislature, governor and U.S. Justice Department are all in agreement that Alabama has to have three new prisons to alleviate unconstitutional overcrowding.

The governor proposed privatizing leasing three new men’s prisons. Governor Ivey and the Alabama Department of Corrections proposed a lease project as the solution to replace many of Alabama’s aging overcrowded and understaffed prisons. In February, Ivey signed a 30-year lease agreement for two of the three new prisons, unilaterally, without legislative authority or input. The national firm, Core Civic, was chosen to receive the lease agreement and to build new prisons in Elmore and Escambia counties.

However, the privatization plan has been thwarted by the Private Prison Firm’s inability to garner financing. In May, Bloomberg News reported that all three banks that were to finance the venture were backing out completely.

The lease plan expired on June 1. Therefore, the route that legislative leaders prefer is that the state own the prisons and pass a bond issue to pay for them.

Legislative leaders primarily and importantly Finance Committee Chairmen, Steve Clouse of Ozark and Arthur Orr of Decatur, believe that there needs to be a Special Session called by Governor Ivey to address the building of three new men’s prisons and floating a bond issue to pay for them with the state owning the prisons.

Representative Clouse has brought up another valid reason for there to be a Special Session regarding prisons. The state received guidelines in the waning hours of the session from the Treasury Department on using the four billion dollars Alabama is expected to receive for state and local governments under the American Rescue Plan passed by Congress. The legislature will be the appropriator of that money. It may well could be used by the state for prisons.

Another factor that will be on the table are the locations of the prisons. A change from the lease plan to a prison bond issue would probably alter the locations to land already owned by the Department of Corrections. This land is available and was actually purchased adjacent to the current prisons at the time new prisons were last built over three decades ago during the last Wallace Administration.

This land around the prisons was purchased for future expansions. During the planning a blue ribbon study commission was hired to determine the best locations for the prisons. The commission suggested that they should be near the metropolitan areas of the state. Wallace looked at the proposal and said that looks good, but I think we will probably put those prisons in Barbour County. Gov. Wallace’s home county was Barbour.

The bottom line is that the prison lease plan proposed by the governor is dead. The other given is that new prisons have to be built to address a myriad of problems that have been outlined in the Justice Department suit.

This issue has to be addressed. Therefore, it looks imminent that at least two Special Sessions are in store for this year – one on reapportionment of legislative and congressional districts and one on prisons.

We lost our oldest past governor, Gov. John Patterson, on June 5. Gov. Patterson passed away at his ancestral home at age 99 surrounded by his family. Patterson was governor from 1959-1963. He defeated Gov. Wallace in the 1958 Governor’s Race, which featured a field of 14 candidates. Patterson was attorney general of Alabama prior to be elected governor.