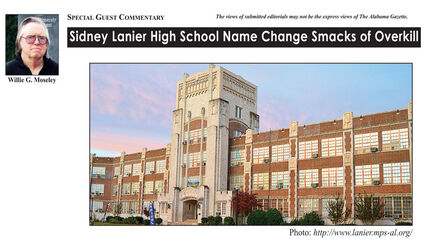 Full disclosure mandates that I aver that I graduated from Sidney Lanier High School in Montgomery in 1968.

Technically, the actions of a governing organization in the Capitol City regarding name changes for three high schools aren’t anybody’s business if he/she doesn’t live there.

And my family now resides in a rural area of Elmore County.

However, a lot of folks who now reside in the Lake Martin area attended Montgomery public schools when the integration of that school system was in its infancy, so they’re probably paying attention to the current transition regarding high school monikers.

A brief historical perspective is appropriate:

Sidney Lanier High School opened in 1910. Its original location was on South McDonough Street. The building transitioned to a junior high school when Lanier moved to its gargantuan, castle-like structure on South Court Street in 1929.

And it isn’t out of line to speculate about whether the original namings of Lee and Jeff Davis were done in defiance of the inexorable advent of integration.

Originally envisioned to lessen the population of Lanier High, Robert E. Lee High School opened in September of 1955, about 15 months after the landmark Brown Vs. Board of Education decision.

Three months later, Rosa Parks was arrested on a city bus in front of the Empire Theatre on Montgomery Street.

(TANGENT: The same “defiance” question is valid concerning the placement of the Confederate Battle Flag/naval jack over the Alabama State Capitol in the early 1960s. That action was apparently more of a, er, generalization but was still confrontational).

It needs to be emphasized that Sidney Lanier himself was no Confederate icon like Lee or Davis; he was merely an enlistee who was a prisoner of war during the conflict. Afterwards, he became a renowned poet (hence the sports teams’ nickname) and briefly resided in Montgomery and Prattville before returning to his hometown of Macon, Georgia.

There was also a Sidney Lanier High School in Macon. It was consigned to history in a merger about 50 years ago.

A bit of irony concerning Montgomery’s Lanier High School is the fact that the original plaintiff of the lawsuit to desegregate the Capitol City’s public schools wanted to attend Lanier, and he did, when the courts ruled in his favor.

Accordingly, a name change for a landmark of the original Civil Rights Movement might dilute the importance of said landmark when chronicling the history of civil rights.

A similar scenario has occasionally been proffered concerning the Edmund Pettus Bridge in Selma, which was named after a Confederate general and Klansman. Its name and place are so important to civil rights history that some minority activists have publicly advocated leaving its name intact.

Even a Lee High School graduate with whom I conversed questioned the renaming of Lanier compared to Lee and Jeff Davis (and he’s a generation younger than me).

For a lot of observers, the idea of renaming Lee and Jeff Davis is ultimately a “Perhaps-I-can-sympathize-but-I-can’t-empathize” notion, given the demographics of the student populations of those two schools.

And Lanier is statistically similar.

So call this the viewpoint of a “proprietary alumnus” if you wish, but the Montgomery school board’s rationale for changing the name of historically-important Sidney Lanier High School doesn’t add up.

Willie G. Moseley is the Senior Writer for Vintage Guitar Magazine, News Editor Emeritus for The Tallassee Tribune, and the author of 14 books.