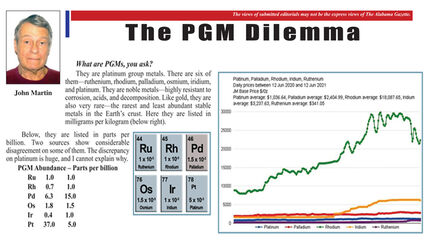 What are PGMs, you ask?

They are platinum group metals. There are six of them—ruthenium, rhodium, palladium, osmium, iridium, and platinum. They are noble metals—highly resistant to corrosion, acids, and decomposition. Like gold, they are also very rare—the rarest and least abundant stable metals in the Earth’s crust. Here they are listed in milligrams per kilogram (below right).

Below, they are listed in parts per billion. Two sources show considerable disagreement on some of them. The discrepancy on platinum is huge, and I cannot explain why.

Of these six, platinum and palladium are the most abundant and also the most familiar. They are widely used in jewelry, industrial equipment, and catalysts. These two also have lower melting points than the others and are reasonably easy to fabricate. Also, both of them are readily available as investment coins and bars.

The other four—ruthenium, rhodium, osmium, and iridium, are hard and have extremely high melting points—some not a great deal lower than tungsten. They are very difficult to fabricate and are normally used in specialized applications. Investment bars of any of these are extremely hard to find (for rhodium and iridium) and probably impossible (for ruthenium and osmium).

However, they are often used as alloying agents. An alloy of 90% platinum and 10% iridium is a standard for most platinum jewelry. Because of its near-zero thermal expansion, this alloy was also used for the Bureau of Standards’ kilogram and meter bar.

Because of its brightness and hardness, rhodium is plated onto silver rings to prevent tarnishing and onto “white gold” to make it white. To be honest, there is no such thing as white gold. It is typically alloyed with platinum and/or palladium to make it somewhat white, but true whiteness comes from a plating of rhodium. This can be problematic when a ring must be re-sized or whenever the rhodium plating wears off after long or hard use. Today, platinum is much less costly than gold. If you want a white metal, buy platinum (the tried and true 90% Pt/10% Ir alloy) instead of “white gold.”

In recent years, because of an increased interest in element collecting, several companies have begun producing one centimeter density cubes of many elements. Cubes of the more common ones can be purchased on eBay and other online sites for a few dollars each. But precious metals are obviously pricey. Those that are also difficult to fabricate are even pricier. A serious collector who wants a set of the six PGMs will have to shell out thousands of dollars. Here is a one centimeter cube of iridium. It weighs 22.65 grams, about two thirds of a troy ounce.

Now what is the dilemma concerning PGMs? Recently, huge quantities of rhodium, palladium and platinum are being swallowed at record levels to satisfy the exploding demand for catalytic converters, which now consume about 77 percent of the world’s supply. Producing them, of course, has pushed PGM prices to astronomical levels. A few years ago, palladium stood at about $700 per ounce. Now it has quadrupled to about $2800. Rhodium has shot up from about $1100 up to a recent record high of (are you ready for a shock?) $29,800 per ounce this past March 22. (No, the $29,800 is not a typo). Today (June 12), it has slipped back to $22,750. And just since the beginning of this year, Iridium has jumped from about $2000 up to $6000. This chart shows the steep increases over a single year.

PGM price hikes are not about to stop. Consumption is likely to escalate for the foreseeable future as China and India (with over a billion people each) buy and drive increasing quantities of automobiles, and government regulations push for more and more extreme air pollution control mandates.

In spite of the runaway demand, PGM production is not increasing. With the exception of a single mine in Canada, they are by-products of nickel and copper smelting and processing. Most PGMs come from a single source, the Bushveld complex in troubled South Africa, which produces over 75% of the world’s annual supply. Russia’s Norilsk, Canada’s Sudbury deposits, and Zimbabwe provide most of the remainder.

The annual global production of palladium is only 207 tonnes (metric tons), platinum 192 tonnes, ruthenium 30 tonnes, rhodium 28 tonnes, iridium 3 to 4 tonnes, and osmium less than a tonne. There is no practical way to materially increase the production of any of these over a long period.

Even when converters are recycled, a 100% PGM recovery is impossible. During normal use, bits of the catalyst shake loose and are scattered along the highways. In the recycling process, additional losses take place via careless handling. Also, an unknown number of converters not removed from scrapped cars go directly to the crushers and shredders, causing their PGMs to be mixed into the scrap steel and therefore lost. After a few generations, a substantial portion of our PGMs will become scattered across the planet in microscopic particles that are impossible to recover—just about the time when the world’s mines begin to run out.

How do we solve this dilemma? First, let’s ask ourselves, “Are catalytic converters really necessary?” And are there any substitutes for PGMs in them? They have only been around for a few decades. Before that time, automobiles did not have them, and we still had reasonably clean air.

Somewhere, we must respect the law of diminishing returns and stop regulating our industry and citizens to death by attempting to eliminate that last smidgen of effluents that are but a small percentage of what nature pours out with thunderstorms and volcanoes. Never forget the catastrophic damage the EPA did to Volkswagen for “cheating” to enhance its fuel economy by releasing a few extra milligrams of nitrogen oxides.

Catalytic converters also have other problems. In addition to the costly thefts and associated crime, converters are guilty of starting wildfires. I don’t even have to get started on explaining how destructive these can be.

Because of their extreme scarcity, production of PGMs is likely to decline in a few years. Combined with vastly increased consumption, the future of adequate supplies is grim. After a few generations, with our PGMs consumed and dispersed, we will be unable to provide even the catalytic demands of essential industries. Once that happens, unless non-PGM catalysts can be developed in the future, numerous segments of economies around the world will irreparably suffer.