Montgomery 9/11 Commemoration of the 20th Anniversary 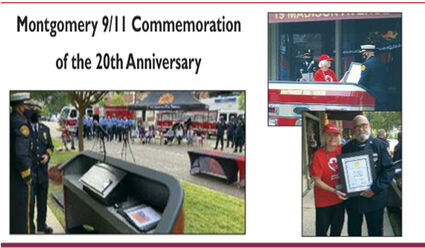 The Montgomery Department of Fire and Rescue held a special commemoration honoring Americans who lost their lives 20 years ago September 11, 2001. Madison Avenue was blocked off in front of the headquarters of the Montgomery Fire and Rescue Department at 19 Madison Avenue. Three large fire trucks were parked at angles, and a huge American flag hung from a tall rescue ladder.

Mayor Steven Reed spoke and expressed appreciation to those who serve. In the distant background, single tolls of bells from the steeple of Saint John’s Episcopal Church could be heard.

A moment of silence was held in remembrance of those who lost their lives on 9/11/2001 at the World Trade Center, the Pentagon and Pennsylvania. A fireman struck a large bell for those not only who lost their lives that day but also for the 15 members of the Montgomery department of Fire and Rescue who have perished in the line of duty since the Department was formed in 1898. As each name of the Montgomery fireman was called, a fireman walked up and laid a special fireman’s helmet on a table.