In the Beginning was the Word…

(The Real Reason we celebrate Christmas) 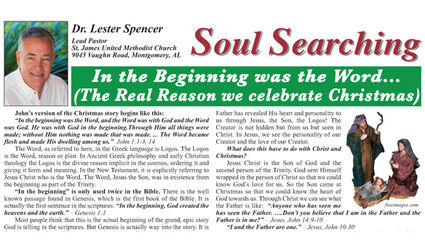 John’s version of the Christmas story begins like this:

The Word, as referred to here, in the Greek language is Logos. The Logos is the Word, reason or plan. In Ancient Greek philosophy and early Christian theology the Logos is the divine reason implicit in the cosmos, ordering it and giving it form and meaning. In the New Testament, it is explicitly referring to Jesus Christ who is the Word. The Word, Jesus the Son, was in existence from the beginning as part of the Trinity.

But if you want to look back into the once upon a time before all time, then you have to start with the Gospel of John in John 1:1-3. Now we are reaching back to things prior to Genesis. John is peering back into the mystery of God’s own life, before everything else existed, and he was trying to unveil this: in the ancient past there was a fellowship, a heroic intimacy, something called the Trinity.

Why is this important and what does it have to do with Christ and Christmas? Good questions.

Why is this important?

“Through Him (Jesus, the Word) all things were made….”

It tells us we were not created by chance. We are not the result of the Big Bang or some impersonal, uncaring being. Every person has value and worth and is created with a unique personality, DNA and fingerprints. And furthermore, we live in a beautiful, complex and dazzling creation beyond description. Elephants. Jaguars. Deer. Kangaroos. Lizards. Eagles. Octopuses, Dolphins. Pine trees. Tulips. Mangoes. The sun. The moon.

We were created by a relational God who is a person that we can relate to as Father, Son and Holy Spirit. One God who expresses Himself in three different and distinct ways. And He wants to be in relationship with us! And the Father has revealed His heart and personality to us through Jesus, the Son, the Logos! The Creator is not hidden but from us but seen in Christ. In Jesus, we see the personality of our Creator and the love of our Creator.

What does this have to do with Christ and Christmas?

Jesus came to reveal the Father to us, to save us from our sins and to bring us into a relationship with the Father.

“For God so loved the world that He gave His only Son so that whoever believed in Him should not perish but have everlasting life.” – John 3:16

As C.S. Lewis put it: “The Son of God became the Son of Man so that the sons of men could become the sons of God.”

So, the Word, Jesus the Son of God, came to earth the first Christmas to reveal the Father and the heart of the Father towards us! The incarnate One, Jesus, became God in the flesh as the scriptures tell us, “the Word became flesh and dwelt among us” – John 1: 14. Jesus came to us as a human being to teach us, lead us and offer Himself as a once and for all sacrifice for our sins so that we could be in right relationship with God through Christ and walk with the Lord in this life and the next!

That is what Christmas is really all about!

And that is why we Christians celebrate and love the Christmas season so much!

Maybe this Christmas season you could read John’s version of the Christmas story in the Bible found in John 1:1-14, and feel free to this article to your family as a reflection or devotion about the real reason we celebrate Christmas!

Merry Christmas to you and yours! And I pray you too will know the love and salvation of the Father as revealed to us through the Son, the Word, the Logos!

“Look for Christ and you will find Him. And with Him everything else.” – C.S. Lewis