Don't Hate Me Because I'm Right 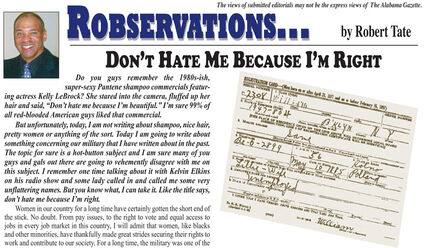 Do you guys remember the 1980s-ish, super-sexy Pantene shampoo commercials featuring actress Kelly LeBrock? She stared into the camera, fluffed up her hair and said, “Don’t hate me because I’m beautiful.” I’m sure 99% of all red-blooded American guys liked that commercial.

But unfortunately, today, I am not writing about shampoo, nice hair, pretty women or anything of the sort. Today I am going to write about something concerning our military that I have written about in the past. The topic for sure is a hot-button subject and I am sure many of you guys and gals out there are going to vehemently disagree with me on this subject. I remember one time talking about it with Kelvin Elkins on his radio show and some lady called in and called me some very unflattering names. But you know what, I can take it. Like the title says, don’t hate me because I’m right.

Women in our country for a long time have certainly gotten the short end of the stick. No doubt. From pay issues, to the right to vote and equal access to jobs in every job market in this country, I will admit that women, like blacks and other minorities, have thankfully made great strides securing their rights to work and contribute to our society. For a long time, the military was one of the final frontiers of inequality in the work place for women. When I went to Undergraduate Pilot Training in 1983, we had a couple of women in my class and one female instructor pilot in my T-38 flight. Although women went through the same training as the men, they were barred from flying combat aircraft.

No matter how good their grades were or what they wanted to fly, women were restricted in what they could fly. In many cases, this in turn limited how far many of them would go in the military. That folks, is discrimination.

Finally, in 1993, people pulled their collective heads out of you know where and authorized women to fly combat aircraft. That year, Jeannie Flynn (now Jeannie Leavitt) became the first female USAF fighter pilot while Cara Hultgreen became the first Navy fighter pilot. Since that time, we have females flying every aircraft in the Air Force and Navy inventories and we have even had at least two female USAF Thunderbird pilots.

Back in 2012, the US Army decided to open jobs to women in some of its all-male combat units. Since practical experience already showed there was much cross over anyway, the Army simply decided to make it official. This change is expected to open up close to 14,000 new jobs for women although some 250,000 jobs reportedly remain closed. Some of the jobs opening up are tank mechanics, artillery and rocket launcher crewmembers. Yes, the world, rightfully so, is opening up to everyone who wants to contribute.

This brings us to 2021 and the draft Defense Authorization Bill. In the draft version, a provision was made that would require women to register for the draft. Unfortunately, and yes, in my opinion, Missouri Senator Josh Hawley and several other congressional Republicans to include Ted Cruz and Tom Cotton, unfortunately opposed the provision; effectively killing it before it gained any real traction. The National Defense Authorization Act of 2022 initially included a provision to “modernize the Selective Service System” by requiring women ages 18 to 25 to sign up for a draft but Senator Hawley filed an amendment on 29 October to keep the American mindset in the Neolithic Age. The bill was an attempt at modernization of the selective service program by supporting “the mobilization needs of the Department of Defense by including women if the all-volunteer model is no longer able to recruit enough people during a time of national crisis.” (1)

Hawley wrote, “It is wrong to force our daughters, mothers, wives, and sisters to fight our wars. [Women] have played a vital role in defending America at every point in our nation’s history. But volunteering for military service is not the same as being forced into it, and no woman should be compelled to do so.” (2) Wow.

So here I sit in my study and unfortunately have to ask a most important and extremely unpopular question. Why is it that ONLY men, aged 18-25, are required to register for the Selective Service System (SSS)? In other words, register for the draft? I’m throwing this out there only because I really have not heard a good excuse as to why not. Much like Hawley’s statement, most arguments lack any substantial logic. Look, according to the SSS, male citizens and immigrants, documented and undocumented, residing in the U.S. and its territories must register. Why not women, too? For crying out loud, even illegal immigrants are required to register. “WHO MUST REGISTER? Male U.S.

citizens and immigrants, documented and undocumented, residing in the U.S. and its territories must register if they are age 18 through 25.” (3) I love the quote on the registration form that reads, “FAIRNESS AND EQUALITY by registering all eligible young men, the Selective Service System ensures a fair and equitable draft.” Does it really? If it excludes 100% of the women in our country, how exactly is that actually fair and equitable? It’s not!

All I am saying here is that women have rightfully fought for the right to participate in combat roles. They have reasoned that they have as much right to fight for this country as do men. Since they have successfully argued their case to fight for this country and fly some really cool airplanes while doing it, how can anyone rationally protest that women should be excluded from registering for the draft? They can’t. The logic there does not exist. This people, is also discrimination.

I have had people tell me, “I don’t want to see my daughter in combat.” Well, most folks don’t want to see their sons in combat either. Besides, if a draft ever occurs, not everybody will be drafted into combat roles. There will be plenty of need for non-combat personnel should the proverbial balloon ever really go up. In fact, the vast majority of military jobs are non-combat related. I have also had people tell me, “Not all women want to go into the military.” Again, I say, neither do all men. Not all men are fit for combat and neither are women. But once again, not all people drafted will be put into combat and more importantly, what is good for the goose is good for the gander. Here is a perfect example. In the next great war, which will hopefully never happen, we are going to need a lot of smart, tech savvy people. I am sure that many of our smartest, computer hacker, computer programming stars in this country are women. In a highly complex cyber type war, why in the heck would we not want to have women fighting this type of war from the safety of their office hundreds or thousands of miles away from the fight? To ignore this resource, in my opinion is stupid. Without the draft, would these brilliant assets ever willingly step up to the plate so-to-speak and join of their own volition? Maybe, maybe not.

The bigger point here is this. Since women fought for this right, how can they selectively choose which military requirements they are willing to support? Can you imagine if Al Sharpton said that no blacks should be required to register for the draft since not all blacks want to serve in the military? What about all Asians or folks from a certain city or state? That would be like the Governor of California telling the federal government that no men from his state will ever again register for the SSS because California doesn’t believe in war. Sorry folks, but equal rights exist, or rather should exist, in every situation and every case. Equal rights should not be enforced only when you want it to serve your myopic political agenda.

Do I really want to see women drafted into combat? No, but neither do I want to see men drafted into combat. But should the draft ever again be necessary, I think all of us will have “bigger fish to fry” than this single issue. But living in the greatest democratic republic on this planet should require potential sacrifices of all its citizens; male and female. No group should be allowed to pick and choose which sacrifices they want to make. In my view it is all or nothing and if women really want America to be the sex-blind society they have fought so hard to create, they should be the first ones to step up to the plate and say, “Yes, we will stand shoulder to shoulder with our brothers, do what is right and register for the draft.” Certainly, most women should willingly admit that they have more of a vested interest in this great country of ours than the illegal immigrant who is required by law to register.

Now that I’ve stated my case, I’m ready for the eggs and tomatoes. Let ’em fly. Change my mind.