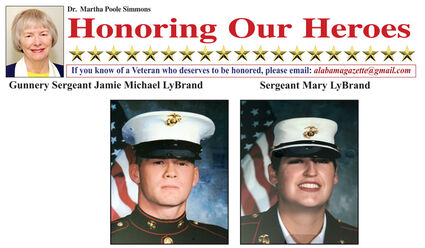 GySgt LyBrand was born in 1975 to his parents, Terry and Denise LyBrand, at Ft. Bennington, GA, and was ultimately reared by his grandparents, Joseph Lee Bolden Sr. and Gloria Ann Bolden mainly in Alabama and Florida. He graduated from Pace High School in Pace, FL, in 1993.

GySgt LyBrand‘s family has a rich heritage of military service. Many cousins, uncles, brothers, and more distant relatives have served their country. His father served in the Army, his father’s father in the US Navy, and his maternal grandfather started the US Marine Corps tradition. GySgt LyBrand’s uncle, Joseph Lee Bolden Jr., picked up where Senior left off, and then it was GySgt LyBrand’s turn. His younger brother served in the U.S. Marine Corps, and several other family members did too. He met his wife of over 24 years in the Marine Corps during his first enlistment.

GySgt LyBrand’s wife, Mary, served on active duty for eight years in the Marines during his tenure. This had a very big impact on their two sons, Layne and Collin. Both of them earned the title of US Marine just like their mom and dad and all the way up to their father’s maternal grandfather, PawPaw, who earned his title in the 1950s! The boys did it differently though as they are Marine Corps Infantry.

GySgt LyBrand enlisted in the U. S. Marine Corps on Active Duty in 1993 and retired in 2013 with 20 years of Honorable Service. He completed Basic Training at the U.S. Marine Corps Recruit Depot in Parrish Island, South Carolina. He then completed combat training at Camp Geiger in Jacksonville, N.C. and the Military Police Academy in Anniston, AL.

His first duty station was Marine Base Camp Lejeune with the 2nd FSSG (Force Service Support Group) and within a few weeks, he was deployed upon the USS Nashville in support of Operations in Haiti in 1994. Following that operation, he deployed for cold weather training to Norway and then to Estonia to support the Baltic countries’ (Estonia, Latvia, and Lithuania) entrance into NATO. He later deployed on a humanitarian mission to El Salvador in support of Central American countries that were ravaged by hurricanes in the late 1990s.

During his time with his first unit in the Marines, he earned Meritorious Promotion to Corporal, and then he re-enlisted for the first time.

He then picked up the rank of Sergeant meritoriously, and upon return to the US from El Salvador, he was assigned to Recruiting Duty. He was sent to Valdosta, GA, for recruiting duty, and while there he earned Meritorious Staff Sergeant/E-6.

After recruiting duty, he served a couple tours in Iraq, including Fallujah. He completed other deployments such as the Marine Expeditionary Unit (MEU) Float and even a year in Afghanistan at the tail end of his career.

One particular seven-month deployment was one of his best ever due to his being as Naval tradition would call it a “Polly Wog” with the 26th MEU Expeditionary Unit. He got to sail across the Atlantic Ocean into the Mediterranean Sea through the Suez Canal and below the Equator where he became a “Shell Back”, which involves a ceremony citing the crossing of the Equator by Naval Service Members. He returned to Camp LeJeune, served a year in Afghanistan and had two assignments with Special Operations Training Group (certifying MEUs for deployment). He retired from military service officially on December 31, 2013.

Important notes: while on recruiting duty, he realized that he should practice what he preached that is to utilize the benefits that the US Military provides specifically educational benefits. He made that a goal. In the ladder half of his military career, he earned a bachelor’s degree in criminal justice and completed half the requirements of a master’s degree. After military retirement, by 2015, he completed two graduate degrees and earned a graduate certificate.

Since his military retirement and completion of graduate studies, GySgt LyBrand has continued Federal Service for the last seven years starting with the U.S. Marshals Service (USMS) for the first two years and Department of Homeland Security (Citizenship) for four years, and now he is back with the USMS as a Supervisor for a year.

GySgt LyBrand praises his wife, Mary, who served eight years in the Marines saying, “She’s the reason that I have amounted to anything. I would not have excelled in anything or amounted to anything if it had not been for my bride, Mary. I am a family man and we have two sons in the Corps. I couldn’t be prouder as I am in our family’s accomplishments, it is an honor to serve our great country!”

He is a member of the Townsend Unit #920 Marine Corps League. He takes great pride that their two sons are on active duty with the U. S. Marine Corps. He enjoys supporting the local community, Townsend Detachment, Lima Company 3/23 and any Marine, Corpsman, or Chaplain that he can find.

GySgt LyBrand statements regarding his military service as a Marine are, “Being a Marine is something that is special. It is a very small percentage of the U.S. population that has ever done it. It is pride that you carry in your heart and soul. You know that the people who went before you are heroes. They are awesome and amazing Americans. They helped build this country. There is no greater sense of pride and belonging during my 20 years. There is something special with serving as a United States Marine.”

Sgt LyBrand was born December 1, 1976, to her parents, Steve and Mary Andrews, in Cleveland, Ohio, where she was reared and graduated from Parma Senior High School in June 1995.

Sgt LyBrand completed the 12 weeks of Basic Training at the U.S. Marine Corps Recruit Depot in Parris Island, South Carolina where all female recruits go for boot camp. She had entered service as “open contract”. She was sent to the Marine Corps Air Ground Combat Center Twenty-nine Palms, CA, for training in communications where she learned to run wire, install telephones, and establish tactical switchboard networks in the field as a Field Wireman. Sgt LyBrand then served at the Marine Base Camp Lejeune for the remainder of her four years of enlistment.

Sgt met her husband-to-be, Marine GySgt Jamie LyBrand, at Camp Lejeune, and after becoming a mother of two sons, she remained a full-time homemaker for seven and one-half years and finished an Associates Degree until she re-enlisted in the U. S. Marine Corps September 12, 2007 in order to fulfill a few goals she hadn’t accomplished. She returned for service at Camp Lejeune to resume work as a Field Wireman and deployed to Iraq in 2009 and was there for a year. She served in Al Taqaddum also known as TQ located 74 kilometers from Bagdad where she continued working as a Field Wireman. She completed her second enlistment of four years September 11, 2011 at Camp Lejeune.

Sgt LyBrand her husband, Marine GySgt Jamie LyBrand, have two sons who are also U. S. Marines. Their son, Layne LyBrand, is a Corporal in the Infantry. He is a proud machine gunner, and their youngest son, Collin, is a Lance Corporal infantry rifleman.

After her military service, she worked for a retired Marine as an administrative secretary in New Bern, N.C. for three years until her husband, GySgt Jamie LyBrand, retired from military service. They moved to Spanish Fort, AL.

Using the G.I. Bill, Sgt LyBrand earned a B.S. Degree in Legal Studies with honors. For the past three years, she has been employed by the USDA Farm Service Agency in Wetumpka, AL, as a program technician initiating farm loans, providing customer service to assist local farmers in the 12 counties in Alabama her Field Office serves.

Sgt LyBrand is a member of the Townsend Detachment #920 Marine Corps League. Sgt LyBrand enjoys cross stitching embroidery. She loves animals especially her dogs, and one day she wishes to own a horse or two! She and her husband enjoy riding their motorcycles throughout rural Alabama.

Sgt LyBrand’s conclusions about her service as a Marine are, “I don’t think that most people could handle the service especially the Marine Corps. I know that it changed my life. There were three things that I wanted to accomplish that had not occurred during my first enlistment, namely, (1) to be promoted to Sergeant, (2) to deploy and (3) to receive the Navy and Marine Corps Achievement Medal. During my second enlistment, I checked those boxes by picking up Sergeant, deploying to Iraq for a year and getting an Achievement Medal for my tour there.”