A Response to the Latest Shooting in Texas 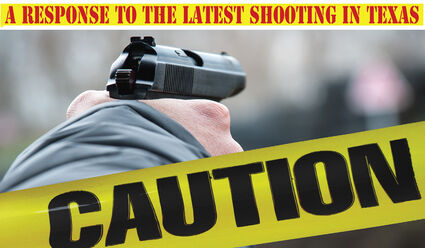 The Uvalde, Texas massacre is the latest in a string of senseless killings by someone inflicting the EVIL that erupts within a perverted and demented mind and soul. Nineteen school children and two adult teachers were slaughtered at the hands of a maniacal Salvador Ramos as he shouted “You’re all gonna die!”

The debate rages as to whether it is society, genetics or pure evil that causes people to go on these rampages, to inflict harm and fear into some of the most vulnerable in our society. Here is a snapshot of the most severe:

The recent wave can be traced to April 29, 1999, at Columbine High School in Littleton, CO. The profiles of these assassins varies as much as the locations, with many having warped manifestos, but others none.

Other infamous murderers include Ted Kaczynski, who began in the 1970s by using bombs while in 1982 in Chicago, the Tylenol murders, which remain unsolved, led to packaging security manufacturing across the world. Of course the 9/11/2001 hijacking and murders changed our “open” society forever, causing fear, vigilance and modifications to the point none have occurred in the united State since that awful day.

Both sides of the political spectrum turn toward the Second Amendment as the source of contention.

While reams of paper have been dedicated to the topic, the best source of meaning of the Second Amendment can be understood by the literal words of those who drafted it. For a detailed explanation of one view of the private right to bear arms see Stephen Hallbrook’s, JD, PhD, treatise on the linguistic meaning of the right to bear arms as intended by the founders at p 153 and following:

If our society desires to alter the Second Amendment to reign in the terror of gun violence, we have a political mechanism to accomplish this goal. Some states and cities have attempted to do a work around with the result that places like Chicago, Washington D.C. and Los Angeles have some of strictest gun control laws in the United States while at the same time experiencing the highest homicide counts in the country:

Can the government really come to the rescue to stop this violence?

One need only look to Ukraine as a cautionary tale of what happens when you believe government’s comforting words of paternalism. Ukraine once commanded the world’s third largest stockpile of nuclear weapons, arguably a strong deterrent and defense against possible assaults from surrounding countries. But, the U.S negotiated with its people to relinquish its weapons with the assurance that our government would defend it should it be attacked (1994 Budapest Memorandum). Less than 30 years later, the country lies in ruins, millions of Ukrainians have become refugees, and the U.S. declines to get it hands bloody by fighting a proxy war with little hope of winning.

Gun violence is horrible. In 2021, over 21,000 people were murdered, and 24,000 people committed suicide. Compared to the total number of mass shootings (defined as four or more deaths), which included 702 murdered and 2,800 injured since first documented, one could surmise that mass shootings are so statistically insignificant so as not to warrant a sea of change in cultural and legal thinking.

However, in Daniel Khaneman’s book, Thinking Fast and Slow, he delves into our thinking mind that categorizes events and decision making into Systems 1 and 2. He explains how emotions (S1) often erroneously override facts (S2) when it comes to our understanding, actions and responses.

But, statistics do not heal wounds, mollify anger or solve problems. The pain inflicted from these callous acts can never be fully removed. We as a culture have changed dramatically in the last 50 years. I am old enough to remember Sears’ catalogues selling rifles. Most of my friends had hunting guns to use long before their 18th birthdays. For 60 or so years, no school, movie house, or church was ever targeted for such heinous behavior. So, what has changed? Is it that the sanctity of life has been maligned by, for example, at-will abortions (approximately 70 million since Roe v. Wade, 1973) Or is it inculcating malleable minors with harsh media in the form of slasher movies, brazen disregard for laws, or utter contempt for anyone not in agreement with selfish motives, whether it be breaking a grocery store line or road rage. Or could one look toward the video game industry with such violent interactive products like Call of Duty, Grand Theft Auto, Diablo, or Fallout? Could it be the multiple failures of the religious community ranging from materialism to hypocrisy to apathy? Could it be the disintegration of the nuclear family? Or is it something else? At its core this evil that surrounds us is no different than that found in the Bible spoken so long ago yet so clearly by the prophet Jeremiah in Chapter 2.

But through this temporal grief and despair, we have eternal hope found through prayer. Let us bow our heads, kneel, and pray. As President Lincoln explained, “I have been driven many times upon my knees by the overwhelming conviction that I had nowhere else to go.”