DEAL OF THE CENTURY 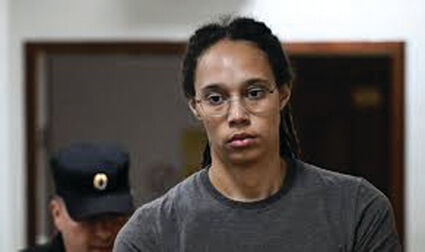 When the Brittney Griner trade with Russian arms dealer Viktor Bout was announced, there was a legitimate flurry of conversations both positive and negative. Like most, I have my opinion about the deal. If someone asks me, I have no problem saying that I disagree with the deal, as it played out, for several reasons. A basketball player for an arms dealer, I do not think so. And although both people arguably hate America equally, the decision to go ahead with the trade, while leaving former Marine, Paul Whelan, to rot in jail for a crime that he did not commit, kinda makes me sick to my stomach. To me it is proof that President Biden, whoever is really pulling the strings in this administration could care less about Whelan since he clearly does not check off any of the "woke agenda" boxes.

I know that a lot of people out there hate Donald Trump and in no way, as I have said in the past, am I to be considered a "forever Trumper." I still supported his Presidency and I like much of what he has said in the past. Love him or hate him, he is a smart guy. Running again in 2024? That is for another day. But one thing he said in the past about making a deal is, "You have to be willing to walk away from the table." You have to. There are times when negotiating with someone, their intransigence is a sign of their arrogance and you must be willing to get up and walk away.

Had President Biden's deal included Whelan and all (if any) other Americans detained in Russia, I would feel much better about it. Griner alone? No. Not even close. No matter how many people cried and put her jersey number their uniforms, if one American dies because of the weapons Bout is probably going to sell, you cannot convince me the deal was worth it. There is a good chance that at some time in the future, American soldiers will come into contact with an enemy supplied with weapons sold by Bout or some terrorists in the U.S. will kill some Americans with his wares. Would it be worth it then?

For some reason, Democratic Presidents seem to have a lock on these really bad deals. The Griner/ Bout deal pales in comparison to President Obama's Taliban for the Army Sergeant Bowe Bergdahl trade back in 2014. That was a real winner. Let me refresh your collective memories. In 2009, Bergdahl deserted his post and defected to the Taliban. There he was held until 2014 when President Obama affected a trade for five Taliban leaders. Yes, five, count them, five Taliban leaders for one soldier who deserted his post. "Rob, how do you know he deserted? I think he was simply captured." Uhhhhh, he left a note behind saying he was defecting. So, in all of Obama's infinite wisdom, who did he let go out of Guantanamo for one Bowe Bergdahl?

1. Mohammad Fazl – Fazl served as Chief of Staff of the Taliban Army. He was associated with terrorist groups opposing US and Coalition forces. According to documents from the Joint Task Force Guantánamo, Fazl is "wanted by the UN for possible War crimes including the murder of thousands of Shiites". The document stated Fazl has become a recruiting symbol for the Taliban.

2. Khairullah Khairkhwa – Khairkhwa was the interior minister under the Taliban. He helped found the Taliban in 1994. He was directly associated with Osama Bin Laden and Taliban Supreme Commander Mullah Muhammad Omar. Likely involved with militant training, he was also "a narcotics trafficker and probably used his position and influences to become one of the major opium drug lords in Western Afghanistan", and probably used profits from drugs to promote Taliban interests.

3. Norullah Noori – Nori served as the governor of Balkh and Laghman provinces in the Taliban regime. He was a senior Taliban military commander in Mazar-e-Sharif. Nori is "wanted by the United Nations for possible war crimes including the murder of thousands of Shiite Muslims" along with Fazl. According to Barnett Rubin, they were "responsible for ethno-sectarian massacres in northern Afghanistan" along with their enemies.

4. Mohammed Nabi Omari – Nabi was the Taliban's chief of communications. Nabi had "operational ties to Anti-Coalition Militia (ACM) groups including al-Qaida, the Taliban, the Haqqani Network, and the Hezb-e-Islami Gulbuddin". He also "maintained weapons caches and facilitated the smuggling of fighters and weapons".

5. Abdul Haq Wasiq – Wasiq was deputy chief of the Taliban regime's intelligence service. Wasiq had direct access to Taliban and Hezb-e-Islarni Gulbuddin leaders, and was "central to the Taliban's efforts to form alliances with other Islamic fundamentalist groups to fight alongside the Taliban against US and Coalition forces after the 11 September 2001 attacks".

By now, everyone reading my column probably knows I am a WWII history buff, and I decided to take a look at these five Taliban leaders and compared them to leaders within the Third Reich who held similar positions within the government and military. Each Nazi listed is comparatively the same as the Taliban member paired with same number.

3. Arthur Seyss-Inquart – Governor of Austria and Reich Commissioner of occupied Holland or Hans Frank – Governor General of Poland (Responsible for ¾ of the Jewish deaths in that country).

a. Albert Speer – Chief architect and Minister of Armaments.

b. Josef Goebbels – Reichsminister of Propaganda. He had control over all news media, art, and public information in Germany.

5. Wilhelm Franz Canaris - a German admiral and the chief of the Abwehr (the German military-intelligence service) from 1935 to 1944.

Let's say the year is 1943 and we were in possession of these Nazis. Do you think for one second we would have released them back into the fight for the freedomof one soldier? Especially one who had defected? Again, let me answer for those who may be struggling with this one. "NO!" I heard some folks on the news talking about how prisoner swaps have happened throughout history in time of war and that is true. No doubt. But I defy somebody to find me an actual historical case where during a time of war, five senior enemy leaders were traded for one soldier.

You wanna know the problem with catch and release? Try this on. Today, these Taliban guys are all part of the new government which today by the way, have announced that no women in the country will be allowed to pursue an education beyond the sixth grade. That didn't take long did it? So if you are asking, "Where are they now?", here is the answer. Fazl - Deputy Defense Minister; Khairkhwa - Acting Minister of Information and Culture; Noori - Acting Minister of Borders and Tribal Affairs; Omari – Since August, the governor of eastern Khost province; Wasiq - Acting Director of Intelligence.

So, this leaves us with the Griner/ Bout deal. Reports have come out that Bout has already gone back into business. Heck, why wouldn't he? I almost puked when the National Security Council Coordinator for Strategic Communications John Kirby tried to justify the swap by saying that Bout would have been released in 2029 anyway. Yeah, Herr Kirby, another seven years. Why can we not all just admit that this deal stinks and Biden got it wrong, yet again? I would say the President should be ashamed but he has no shame.

I read an article about Griner the other day that I have to admit was the first that I saw that put a real, unique face on her. My level of sympathy and respect actually jumped a couple of notches. The article said that while she was on the airplane coming home, the only thing she wanted was to talk. That's it. No crazy demands, nothing but to talk. She said for the past 10 months she had listened to nothing but Russian and just wanted to talk. I really liked that. Then it said she took the time to memorize everybody's name on the airplane and have direct conversations with each of them. She spent most of the 13 hours on the plane just talking to people. Again, I really liked that a lot. It showed a side of her that no other article I have ever read did.

So, as an American I am glad to see Griner back home with her family. But certainly not in the manner in which it occurred and not without Whelan or any other American illegally detained in Russia. The deal should have been, "You want Bout, you will release all of these Americans. If not, take note of the Mistle Toe dangling in front of my backside as I head out of the room. Call me when you are serious about negotiating."