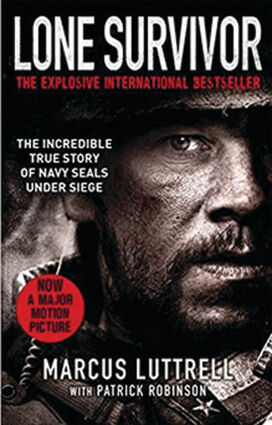 Marcus Luttrell, a former Navy Seal, wrote a book about the deadliest day in Navy Seal history. The book was entitled Lone Survivor and was later made into a very successful movie starring Matt Wahlberg as Marcus Luttrell. Marcus and three other Navy Seals were sent on a secret mission into the mountains of Afghanistan in 2005 to attack top Taliban leaders who were gathering in a small village for a high level meeting. It was supposed to be a quick in and out mission. But things went south fast!

The Navy Seal team was spotted by some shepherd boys and one thing led to another and some 200 well armed Taliban leaders and soldiers came up the mountain after them. A deadly and bloody battle ensued. They radioed for help from a nearby base and 17 Navy Seals and soldiers were sent in after them on a helicopter. As the aircraft neared the rescue spot to evacuate the Navy Seals, the chopper was shot down and all souls on board were lost. Marcus and his team were on their own. During the relentless and heavy firefight, his three Navy Seal brothers were killed too. Marcus was eventually rescued and became the lone survivor of the deadliest day in Navy Seal history. Some 20 Navy Seals were killed that day. Marcus had been shot 11 times, broke his back, his pelvis and his right hand. Also, both his knees were blown out, his shoulder was pulled out of socket and his face was severely lacerated.

When asked how he survived, he said it all went back to his Navy Seal Training on the beaches of Coronado Beach, CA. To become a Navy Seal you as highly vetted and screened before you ever start the six month training which is by far the toughest military training in the world. In the forth week of the first month, you go through what they call "Hell Week". Only 25 to 30 of the 120 men in the class will make it though this week. They are only allowed four hours of sleep in this five day period and are forced to do continual exercises and obstacle courses. They spend a lot of time in the freezing waters of the pacific, and they are always wet, cold and covered in sand. During "Hell Week" they are constantly offered the opportunity to quit by simply walking up to the Dining Hall and ringing a bell located there. They ring it three times and lay their helmets down. They are told that there is no shame, no questions asked. They can go in and get a hot shower, dry clothes, eat a hot meal, take a nap, and then they will give them a bus ticket home. 75% of them will be home by day three. The ones that make it through "Hell Week" learn to never, never quit. They learn how to be an overcomer!

Here are a few of those promises:

"In this world you will have trouble (trials and tests). But take heart (be of good cheer)!

"You dear children, are from God and have overcome these things

"No, in all these things we are more than conquerors through him (Jesus) who loves us." Paul, Romans 8:37