Completed in 1851, this National Historic Landmark is a museum of state history and politics. Additions to the building were made several times. The Capitol was restored in 1992. The Confederacy began in the original Senate chamber and the Selma to Montgomery 1965 Voting Rights March ended on the street in front of the building. Today, the governor and other executive branch officers still occupy offices in the Capitol.

In 1846, following Cahawba and Tuscaloosa, Montgomery became Alabama's capital city. The first capitol building, a handsome Greek Revival structure designed by Philadelphia architect Stephen Button, was built in 1847. In 1849 the building burned. Between 1850-51, the present capitol building, also in the Greek Revival style, was constructed on the same site. A rear wing was added in 1885 and the two side wings between 1906 and 1912. A rear extension with a neoclassical portico similar to the original west front portico was completed in 1992.

A major effort to rehabilitate the Capitol began in the 1970s. While most of this work was finished in 1992, efforts to restore and enhance the historical character of the building are ongoing by the Alabama Historical Commission. 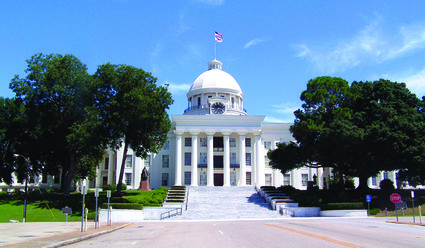 Directions: Take exit 1, I-85, and turn north on Union Street. Continue 1/2 mile. The Capitol is on the left after Washington Avenue.