Starting with the football season of 2014 a four team play-off will be initiated. This may or may not be better than what we have with the BCS Championship Plan with only the top two teams participating.

The football world is anxious to come up with any plan that will keep the SEC from dominating the national championship play-off. The SEC has won the last seven championships. The good news for the SEC is that in 2014 it is conceivable that two SEC teams could be in the four team play-off.

This four team play-off will not satisfy the football fans of American very long. They are only interested in an eight team play-off. Mark my word! That is the next step of the NCAA and the American Football Coaches Association. It won’t be far away!

Let’s look at the positives and the negatives of an eight team play-off incorporating the five major bowls. One might say that this punishes the bowls by not allowing them to set up the most attractive match-up of top 10 teams. Does it? (See diagram #1 below.)

So, you see the bowls would benefit greatly. They would almost be guaranteed to have higher ranked teams than they have been having over the last few years. That should be a positive position for my plan.

Now, if we can agree upon what we have so far, let’s look at the semi-final round. Do you think Atlanta would be interested in hosting the winner of #1 vs. #8 and the winner of #4 vs. #5 on the second weekend in January. You betcha’.

Do you think the Astrodome in Houston would be interested in hosting a semi-final game between the winner of #2 vs. #7 and #3 vs. #6. You betcha’. So we have a positive position for the semi-final national championship play-off games.

The next phase of my plan of course is to use the Rose Bowl Stadium as the permanent home of the championship game, because of the historical significance of how our national champions were selected for much of the history of college football. This plan would not at all interfere with the Rose Bowl itself. It would still invite the champion of the Big 10 and the champion of the Pac 10 to play in the Rose Bowl on the same weekend of the quarter-final games that will be going on in the Cotton, Fiesta, Orange and Sugar Bowls. If one of these teams is ranked in the top eight they would have to choose the Rose Bowl or the playoff. I can’t imagine a team turning down an opportunity to be in the playoffs, so the second place team from one of these conferences would have to be their representative in the Rose Bowl. They do this now anyway.

Note: Prior to World War II, the winner of the Rose Bowl was very likely to be voted national champion. This tradition had been in place since the inception of the Rose Bowl. Usually, during those years, a powerhouse from the East would play a powerhouse from the West and the winner would receive most of the votes, consideration, etc., by the main media centers concentrated in New York and California. There was a serious effort to invite the best two college football teams in America. However, the general consensus was that all of the best teams were in the East, Midwest, and the West Coast. That is until 1925 when Coach Wallace Wade accepted an invitation to bring his Crimson Tide football team to Pasadena to play the mighty Washington Huskies in the 1926 Rose Bowl. Alabama shocked the football world by beating Washington 20-19 and was named national champions. Alabama opened the floodgates with this win for southern football to be considered among the elite of college football. Southern teams made numerous appearances in the Rose Bowl after Alabama’s visit. The last southern team to play in the Rose Bowl was Coach Frank Thomas’ 1945 Alabama team led by Harry Gilmer. They beat USC 34-14 in the 1946 Rose Bowl. Alabama was again named national champions. Since then the unholy alliance between the Pac 10 and the Big 10 has shut out anyone from any other part of the country from participating in the Rose Bowl, the “Grandaddy of All Bowl Games.” Only the champions of the Big 10 and the champions of the Pac 10 are invited.

Rose Bowl Stadium seats over 100,000, therefore it is the perfect venue for a national championship game, ie. Alabama vs. Texas in the 2009 championship game. The weather in Pasadena is usually conducive to such an event. The Southern California area would benefit greatly from having basically two Rose Bowl weeks every year. I can’t imagine what resistance could come from the Rose Bowl itself. However, if for some reason the Rose Bowl was not interested in hosting the NCAA National Championship Game every year, then we can easily find an appropriate site. I would recommend the site of the last Super Bowl from the year before. They would have all the pieces in place to host such an event. This would also allow the championship game to be rotated each year following the site of the Super Bowl of the previous year. Or, Jerry Jones would be delighted to host the game in Dallas.

By adopting my plan, the NCAA would make more money. The individual schools participating will make more money. Eight teams instead of four will have a chance to play for the national championship. The Bowls will make more money because of higher rated teams in their bowls, plus the obvious heightened interest generated by the bowls becoming quarter-final venues for the NCAA playoffs. There would be more excitement in the regular season games because in essence it becomes a 120 team playoff (There are approximately 120 teams playing Division I football). At the beginning of each season every team will have the same chance to make it into the “Top Eight.” One or even two losses would not eliminate a good team (LSU 2005). Nobody can have a legitimate gripe about not making the playoff. If you are #9, you are not good enough. Live with it!

The bowls would also benefit from a rotating system using the alphabet as the basis and the ranked teams being assigned so that every four years each bowl would have the number one team.

The formula is CFOS; Cotton, Fiesta, Orange and Sugar: (See diagram #2 below.) 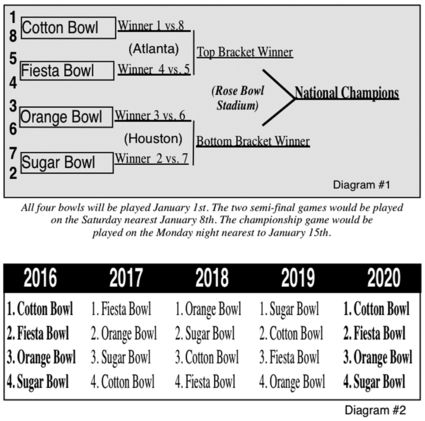 There are probably some negative positions that can be taken regarding my plan. However, I can not think of anything that would be a major deterrent to such a plan. Therefore, I submit this plan to the NCAA, every Division I Conference Commissioner, to Athletic Directors and Head Football Coaches of the football playing Division I schools and to the American Football Coaches Association. I patiently wait for your response!