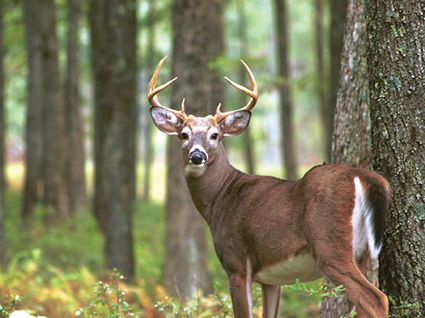 Deer gun season comes in on Saturday, November 23rd. Hunters across the state will head to their favorite hunting sites in anticipation of taking an "opening day" whitetail. If you have done your homework and know where the deer on your property are most likely to be, you could be one of the successful hunters who are able to harvest a whitetail on the opening weekend of gun season. This month, let's take a look at some early season tactics that will help increase your odds when you hit the woods.

All deer hunters know that it doesn't take deer long to realize that hunting season has arrived. Bucks and does react quickly to hunting pressure and tend to become more nocturnal as the season progresses. Your best chance of taking a mature buck will be during the first week to 10 days of the season. After that, the older bucks will become more secretive and much more difficult to hunt, that is, until the onset of the pre-rut in late December. So, what is the key to early season success? Finding the food source. If you scouted back in early September, glassing the oak trees on your property, you will know which trees are producing acorns. Green fields that were planted back in September or early October will also be potential hot spots. Hopefully, you put up some stands in these areas and will be ready opening morning. This time of the year, the key to success is to follow the food source. The average deer needs about 8 to 12 pounds of food per day. Time of day, moon phase, temperature, barometric pressure, wind and terrain are all factors that a good hunter should take into consideration, but food sources should be tops on your list. If the acorns are plentiful, deer will concentrate on these and to a lesser degree, food plots. Just keep in mind when hunting early deer season that a whitetail's habits change with the various food sources that become available at different times during the season.

While it is too early to use decoys effectively, calling can be very effective during the early season. You just have to adjust your technique a little. Early in the pre-rut, a buck will respond to soft grunts, known as contact grunts. These sounds give several impressions; first, that a buck is looking for contact with other males; second, that the male emitting the sound is doing so in a non-threatening manner; and third, that the buck is communicating that "everything is okay." Remember that in the opening stages of the pre-rut, bucks have not yet scented does in estrus and still frequently travel in bachelor groups. This explains why hunters often see several nice bucks together at this time of the year. Soft contact bleats will also attract deer during the pre-rut. I've bleated in does as well as bucks, during the first month of deer season using a bleat call. The key with calling deer early in the season is to keep the calls soft. Hunting deer trails can also be a good way to take an early season deer, but how do you pick the right trail? Let's look at some time-tested tactics that seem to produce results regardless of where you hunt.

We've all heard it said that deer are like people...they prefer taking the path of least resistance. A friend of mine who hunts an area consisting of thick young pines and hardwoods, with dense areas of greenbrier and honeysuckle, decided to put this theory to the test.

Several years ago, he and his hunting partners cut several trails through a previously inaccessible area of dense thickets. Within days, they found fresh deer sign on these new trails. They started hunting these manmade trails and have consistently taken deer that were using them. Blazing trails in overgrown areas is now a standard hunting practice for them.

Another hunter I know has been consistently successful by hunting creek drainages. These drainages often serve as highways for deer because they define the path of least resistance for water, and deer follow them too. The greenest vegetation is always in areas with an abundance of water, and acorn-bearing trees in or near wet areas are likely to produce nuts more consistently than those in other spots.

All deer hunters should be familiar with the "edge effect". Edge areas define breaks in habitat, and deer sometimes use these breaks to define their territories. An edge could be where pine forests meet hardwoods, dry land borders a swamp or my favorite edge, those where a cutover meets a patch of mature trees, preferably hardwoods. Trails will be located just inside of the tree line, paralleling the edge, and there will be trails where the deer enter the cutover. If the area is hilly, deer will almost always use a low, wooded drainage to enter the cutover. Hunting from a tree stand offers a clear advantage in this situation by putting you above the ground vegetation, which will allow you to see deer from a greater distance and make longer shots.

Next month, big changes will take place in the Alabama deer woods. Late December will see the onset of the pre-rut and bucks will shift their focus from eating to preparing for the breeding season. We will look at several different strategies for hunting this phase of the season, so don't miss next month's article. Until then, remember safety first! Always wear a safety harness when hunting from an elevated stand, be sure of your target at all times and when you are going to be hunting alone, let someone know when to expect you back. And if you can, take someone hunting this fall and introduce them to the outdoors.