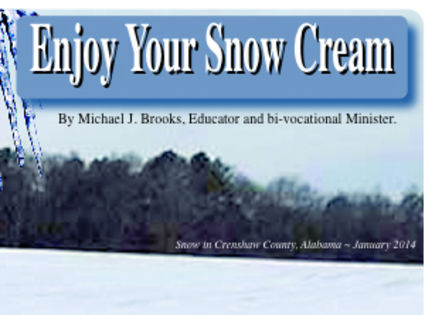 A colleague told about her daughter scooping up the snow in her hands and eating it. Her mom told her not to do this since the snow had dirt and grass in it. The little girl,

recently diagnosed with diabetes and pretty adept at watching carbs, said, "But mommy, snow doesn't have any carbs!" Her mom relented and told her to enjoy this treat.

This story reminded me of a childhood long ago when we were warned not to eat snow cream--a concoction our parents made with snow, sugar and milk. The Russians had been doing atmospheric nuclear testing and our scientists told us the snow might be contaminated.

We were in the midst of what was known as "the Cold War" with the Soviet Union, and the nuclear arms race consumed our nation's attention. We heard lurid tales of World War III which might not last more than a few hours. Some folk built fall-out shelters in their backyards.

Fortunately the hands on the doomsday clock have been pulled back a bit. It was a touching indication of decreased tension when former Soviet leader Mikhail Gorbachev was among the mourners at President Reagan's funeral in 2004. These two leaders made our world safer.

Today we face new threats. Rather than a nuclear conflagration destroying our nation, we're more concerned about random acts of terrorism designed to dispirit us.

Border security is a concern as we think not only about those disrespecting our nation's laws, but also about the ease of terrorists accessing our country.

We face economic fears with a depressed job market and stagnant wages.

We read about China and India growing strong in the world's economy and perhaps eclipsing us in productivity. And there is the ever-present fear of running out of oil. Energy exploration is a paramount concern as increased gasoline prices take a larger share of the family budget.

It occurred to me that not much has changed since my childhood. We still have sobering threats against our way of life and we still need stalwart leaders skilled in diplomacy and filled with wisdom.

Before entering the Promised Land, Joshua told the Hebrew nation, "Be strong and of a good courage; be not afraid, neither be thou dismayed: for the Lord thy God is with thee whithersoever thou goest". (Joshua ­1:9).

We, too, must be courageous when facing today's challenges.

But it's also true that we mustn't allow fear to rob us of simple pleasures like playing with our children and grandchildren in the snow. The people in our lives are God's gift, and we should savor the time we spend with them.