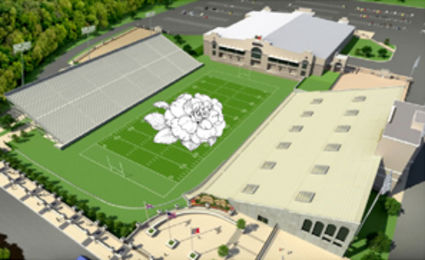 Montgomery will officially be one of the four new destinations for a Division 1, NCAA approved college football game for the season of 2014. The "Camellia Bowl" will be held in Montgomery's historic football stadium, Cramton Bowl. Montgomery has been promoted down through the years by the exposure that the "Blue-Gray Game" provided with its national television network affiliations. The Camellia Bowl will take up Montgomery's banner and promote the city in the same manner. The game itself will be held either December 20th or December 23rd next year. It will come with all the trimmings of other bowl games - a parade, a big banquet, media press conferences, constant local and national media coverage, etc.

Even though this writer is in favor of less, not more, as it pertains to the total number of NCAA approved bowl games. We in Montgomery should get behind the Camellia Bowl and help it be successful. "The Bowl", as it is known in Montgomery, has been recently given a facelift. It is as modern and adequate as most bowl game sites. We need at least 20,000 seats filled in order to properly finance the game. We also need that kind of attendance to show the national media that this is a proper venue for an NCAA bowl game. The money is in the TV contract.

The participants in the game will come from the Sun Belt conference and from the Mid-Atlantic Conference. For instance the two teams could be Troy versus Northern Illinois. How the teams are to be selected will be determined by other bowls that have contractual agreements with teams in these same conferences. Good football is played in both the MAC and the Sun Belt Conference. Therefore we will be blessed with a good game on the field. What we can not determine at this point is the support that the game will get from Montgomery and the surrounding areas. Hopefully that will come as the Camellia Bowl Committee begins its promotional campaign.

Now, lets take a long look at where we are regarding the total number of bowl games that will be played in 2014. To me it is staggering. This past year we had 35 bowl games counting the national championship game. In addition to the four team play-off to determine the national champion, the NCAA approved four new bowls. Along with the Camellia Bowl, there will be the Boca Raton Bowl, the Miami Bowl and the Bahama Bowl. One can guess where these other three bowls will be played. The final dates and other considerations for the 2014 bowl games will be determined at the Football Bowl Association meeting in Las Vegas on April 22-24, 2014. Did you know that there was a Football Bowl Association within the NCAA? As fanatical about college football as I am, the association was never part of my football vernacular.

Well, lets just count up the total number of games created by the bowls for 2014, including the three games necessary for a four team play-off for the national championship. Those three games for this illustration will be counted as bowl games. Unless existing bowl games are eliminated, this will give us 41 bowl games involving 80 teams. This means that out of the 127 teams playing Division 1 football, 63% of the teams will be guaranteed a bowl game. That is astonishing. Only 47 teams will not be in a bowl game. Remember when bowl bids went out to teams in the top twenty that had distinguished themselves with outstanding records? In order to fill 41 bowl games with 80 teams, the NCAA will probably have to change its policy of allowing teams that only have only six wins to be eligible for a bowl.

Last year eight teams played in bowls with only six wins. There were only eleven teams with just six wins in the entire country. That means that three teams were left out of the bowl picture with 6 - 6 records - Troy, Florida Atlantic and Texas State. Is the NCAA going to allow teams with losing records to fill some of these bowls next year? They may have to if there are only eleven teams with a 6 - 6 record as was the case last year. Wow, 41 bowl games in 2014 as compared to 35 bowl games in 2013. My wife, Betty, will really be mad with me from the second week in December of 2014 until the second week 2015. If Old Dominion is playing Idaho in the "Rink-A-Dink Bowl", she will find me in front of "The Big Eye" watching the pre-game show throughout the post-game show. This is a major problem at my house!

In this writer's opinion, no team should be invited to participate in a post season bowl game sanctioned by the NCAA without a winning record. That would mean that the cut-off would be a 7 - 5 record, except in some cases where a team was permitted to schedule 13 games. For instance, Colorado State played in the New Mexico Bowl with a 7 - 6 record because they were willing to play Hawaii. The NCAA allows a school to schedule 13 games if it will play Hawaii, either at home or in Hawaii. Why? It is difficult to find teams that are willing to go to Hawaii because of the cost of the trip. Hawaii does not mind playing in the states. That's how they recruit the mainland. It is surprising that more big time programs don't play in Hawaii. It's a win, there is a bowl-like atmosphere for your players and coaches (plus wives) and it can be a good recruiting tool. Who doesn't want to go to Hawaii? When Alabama went on probation the last time, Athletics Director Mal Moore scheduled Hawaii and acted like it was a bowl game. That was brilliant!

Now, what is the answer to the proliferation of bowl games that the NCAA has had the wisdom or the ignorance to sanction? It would be the recommendation of this writer, if I could get the proper audience, to reduce the number of bowl games by one each year until there are only 30 bowl games. This would not include the four teams and three games required to determine the national champion. This would allow for each slot filling every bowl game to have at least a winning record as discussed above.

What about the national championship? The BCS for the most part is now a dinosaur, but for the most part it eventually pitted the best two teams in the country. I'm not sure Auburn could have beaten Southern California in 2004, but I sure would have liked to see the game. Oklahoma provided little opposition. So, there were just a few times that this writer did not think the BCS method did not do what it was designed to do. However, it was a complicated process.

What we have in place now is a step in the right direction. Even though my personal preference will eventually involve an eight team play-off, which I have written about in great detail in past issues of The Alabama Gazette.

For now we must be satisfied with the four team concept that the NCAA has adopted for the present. The unknown factor is just how will these four teams be selected and how will they be seeded. The NCAA has appointed a "committee" to study the rankings as they unfold week after week. There has to be some computer input as well, gaging strength of schedule, injuries, weather, etc.

This committee is made up of former football players, former coaches, former athletic directors, other men of football knowledge and Condoleezea Rice, who is probably the smartest member. The first meeting of this committee occurred during the second week in January. Their meetings will become more frequent as the season gets underway. There was much anguish and nashing of teeth with the old BCA system. The team ranked third had a legitimate beef about the final selection of the best two teams in America. The "Final Four" as we shall call them, chosen with puffs of smoke emanating from their eventual "master" location den, will probably satisfy those who were dissatisfied with being third in the past. But will it satisfy the followers of teams four and five. Of course four will be happy that they made it, but unhappy that they will have to play the number one team in America in the first round of the play-off. Team five is going to be just as unhappy in this system as team three was in the BCS system. Team one will play team four. Team two will play team three. The winners play for all the marbles. Obviously, from my vantage point there can never be a perfect system. The closest we can come in our lifetime is to see the four team play-off expanded to an eight team play-off. This will come. Maybe my plan will be adopted in a few years. Under my eight team play-off plan, the number nine team "Ain't gonna' have no gripe". I like it. Bring it on!