The Battle for the Minds of Children: American Education at the Crossroads

Train up a child in the way he should go: and when he is old, he will not depart from it. Proverbs 22: 6 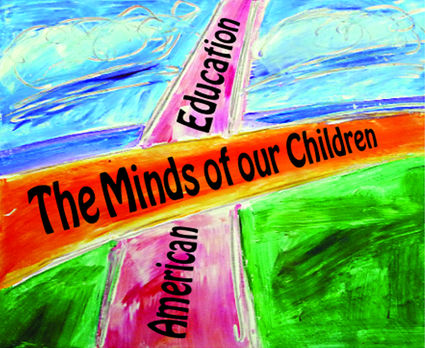 It is a battlefield, not of guns and swords, but spiritual warfare, for the minds and hearts of children. It centers on the definition and purposes of Education in America today. Sincere people, passionate about their own views of Traditional Education and of life, are at war defining and empowering Education. Each group, and the several sub-groups, have a mission and are dedicated to fulfilling it.

The Traditionalists, who embrace the Judeo- Christian worldview, inherited through Western Civilization and in America, particularly the Protestant Reformation. This education philosophy sees children as created and owned by God, their Creator. Each child is born with a Providential plan for each life, "For I know the plans I have for you, declares the Lord, plans for wholeness and not for evil,to give you a future and a hope."(Jeremiah 29:11: KJV). The Creator of life has entrusted the child and the responsibility for him with the parents, through a Covenant relationship described in the Scriptures. The parents are responsible for educating the child God's way. The goals of this traditional education will transform lives with a Biblical world view, enrich the life of a family, and be a wholesome influence in the community and beyond; even a testimony to the nations. A well educated productive citizen has an assured outcome.

This group of citizens can be found in Christian and Home Schools, and also in traditional public schools. A majority of these families will have church affiliation, though not all. There will be a universal affirmation of the Moral Law and moral standards for individuals. They expect these moral standards to be affirmed in all of the schools mentioned. This helps define ones on this side of the battle.

Another group, in stark contrast, to the one above are The Progressives. These too are very idealistic and sincere and have the "good" of students in mind as they earnestly have brought about stark changes in American Education.through their secular, humanistic world view. If one wonders how so many people have aligned themselves with this progressive group, and abandoned the traditional Judeo-Christian world view, it really requires a study of the last century and a half, in American education. European intellectuals, especially from Germany, came to our shores to join and expand the programs of America's universities in the first half of the 19th Century. They have had a tremendous influence until this day. Remember that the vast majority of colleges and universities in America were founded by Orthodox Christian churches and early denominations, to educate preachers.

The withdrawal of teaching orthodox Christianity in American school classrooms was never championed, by community classroom teachers, who for centuries chose their profession out of love and dedication to children and families. They delighted to be used by God to teach in such as way as to "enlighten the understanding, correct the temper, form the habits and manners of youth, and fit them for their future stations." (Webster;s 1828 Education) In all the years that I have interviewed teachers, I have never known one who did not love children, and desire to teach, really teach, and mentor students on an individual basis, appreciating the individuality of each student. Teaching is a unique calling, and to me, it has been a sacred one.

However, the influence mentioned of the "outsiders", indeed radicals, can be learned from the transformation in education caused by influential philosophers such as Spinoza, Rousseau, Darwin, Huxley, Marx, and others. But a key person for dramatic change was "our own" John Dewey. Born in Vermont, in 1859, he lived 93 years, dying in New York in 1952. Space in this article will not allow much commentary on Dewey, but suffice it to say these brief leading ideas. He opposed the idea of a system of fixed values in any human area. This really made a problem for him to account for the nature of Truth. His philosophy has been called numerous things, but best known as Instrumentalism, His theory of human nature and ideals of social change, (etc.) clashed with the Scriptures as you know, and his view of the child and education initiated what we recognize as the Progressive movement in America, though that movement expands far beyond the classroom. Rejecting Christianity, the State is obviously competing to become "God." Deism has become acceptable. In fact, any god will do, except for the God of Christianity.

This group, intent on removing moral absolutes from curriculum standards, maintain that religion is private, has no place in the today's classroom, and have constructed a new interpretation for the First Amendment of the U.S. Constitution. Their goal for education is an economic goal, to equip the student for career readiness in a highly technical society, where our nation is competing with other nations in the global economy. They have a plan to achieve these goals and they have the money available to carry out the progressive ideals at the heart of the plan. It proposes an assembly line concept of educators, principals, and teachers. Pushed aside has been the individuality of the classroom teachers, and the content of Historic and recognized Truth in solid subject contents. Cast out has been the Moral law and the character training of the child. He is now a machine and will compete with the machines of other countries.

One would think that American parents would not be so easily deceived by bureaucrats who are empowered to enforce the Obama Care, which is literally redefining "Health" the government way, and mandating that all employers support their view and program. Even forcing materials and service that clearly violate the First Amendment, As if that were not enough, the Christian view of sexual morality is assaulted in America's classrooms with Sex Education classes that provide contraceptives and redefine human sexuality.

Everyone with children in schools today should become informed about the current battle for the minds and the hearts of the children. The propaganda of the Progressives repeats over and over that we have an "18th Century model to reach a 21 St Century workforce."(BCA)

My husband inherited the old Ames Bag Manufacturing Company in Selma, Alabama, at the end of WWII. It was the largest manufacturing plant in the area, and had hundreds of employees who had worked there for many decades. It had awards for the efficiency of the operation and for the race relations, which were always remarkable in those years.This was not true of every business in those days. The demand for cotton and burlap bags dwindled, and the company was forced to close or to make a transition to other products. Space does not permit me to expound on this remarkable story which has been related in corporate boards over the nation as an inspiration. Just let me say this: Our Selma and Blackbelt employees unanimously wanted to learn new methods of manufacturing and they remained true to my husband's business, as they learned new skills of making fiber and plastic containers of every kind imaginable. They made the first miniature Morton Salt and Accent cans for one example. The very first "Wet Ones" were designed in part by Jack Green, our on-sight engineer. I never knew if he had his PE or not. He was a genius. These were fast changing skills for a work force that never finished college. They had the character to love learning new skills, and they shared Prayer and Scripture over the loud speaker. They had an open door any time day or night to the "Boss's office." We all shared moral absolutes and family values. I prayed with many individual mothers who worked there. There was no racial divide in that workforce.

I don't know one elementary teacher who would not welcome the Ten Commandments on the wall of his or her classroom. I don't know one who would not welcome a prayer at the beginning of the day. It would settle the child down, set the tone for the student to begin to learn that day. Please become informed and join the battle for the minds and hearts of the children. May the Lord lead us all.