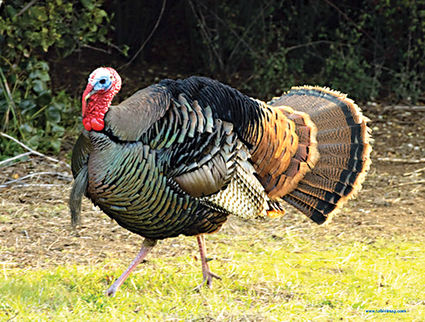 Even under "normal" circumstances, taking an Eastern wild turkey is one of the most challenging, yet rewarding, hunting activities we engage in. However there are always some unique scenarios that require special tactics that make closing the deal an even greater challenge. With turkey season coming in on the 15th of this month, we'll look at some of these tactics and perhaps help you bag that gobbler this season.

Most of the time, when hunters encounter difficult challenges while turkey hunting, those who have a game plan or an idea of what can work given a certain situation are much more likely to score on these wily birds. Let's look at a couple of specific weather situations and how a hunter can make adaptations to cope with the conditions. By having a plan, you can press forward and be more assertive in the hunting, instead of passive. Often, being assertive is a key to getting a gobbler and that's why they're so much fun to hunt. Sometimes you just have to take the game to the gobbler.

Turkey hunting on a windy day is a turkey hunter's nightmare. As turkey hunters, we have numerous disadvantages. We can't hear them gobble as well and we certainly have big problems with their softer calls and the calls of hens, often a key element in any hunt.

In general, it's a day where some hunters will opt to give up early or not go at all. This is where having a strategy can help you get a gobbler on a windy day. I'm not discounting the effort involved: it can be challenging, perhaps one of the most challenging situations because of the hearing issues involved. However, gobblers can be had on windy days. It simply requires a substantial change in hunting philosophy compared to hunting on a calm morning.

Turkeys rely to a great extent on their ability to hear and the wind has a major impact on hearing of both hunter and prey. This hearing impairment dictates the hunter must take his calls to the bird, rather than waiting on the bird to come to him. On windy days, most expert turkey hunters stay on the move. They know from experience that the birds will still be gobbling and although the wind will make them a bit more nervous due to movement of the leaves and tree branches, the spontaneous urges of the mating season can't be denied. If you can locate a gobbler, you can call him in. On windy days, a hunter needs to cover twice as much ground in half the time. Don't stay too long at any one given spot, even at dawn when listening for the birds on the roost. Since our range of hearing and that of the gobbler are both considerably lessened, cover as much territory as possible, using owl hoots at each spot, to locate a gobbler still on the roost. After the birds fly to the ground, it becomes even more difficult to hear a gobble. Continue prospecting even after the birds have left the roost. With the birds on the ground, abandon owl calls and begin to use a variety of hen turkey calls, especially those that are high-pitched and can cut through the wind. Needless to say, windy days require loud, aggressive calling, regardless of the specific turkey call you use. It's important to understand that being subtle or timid with the calls will likely not elicit a response from the birds, primarily because they can't hear it from any appreciable distance.

The important thing to the gobbler is that he hears what he believes is a hen. If he does, he'll usually quickly gobble a response. When a hunter hears a responding gobble to his call, it's a good bet the bird will come in rather quickly. They are social animals and if it's mating season and he hears what he believes to be a hen, on a day like this he is apt to literally throw caution to the wind. So, as soon as a gobble is heard, select a tree or blind site and set up quickly.

Sometimes we wake up to a rainy day; it's a fact of springtime. Occasionally we get an unexpected mid-morning rainstorm while hunting. I certainly urge you to get out of the woods immediately if there's lightning, but if it's merely rain then continue the hunt.

When it's raining look for the gobblers and hens to go to open fields. I've heard a lot of reasons why turkeys will go to the fields. For example, it's possible that turkeys move to open locations because such areas provide better lines of sight for the birds, both in avoiding predators and in finding other turkeys. It's possible that they simply wish to avoid the water dripping from the leaves of the trees. But the reality is it doesn't matter why, just that they do it.

Gobblers seem to be less vocal during a rain than they are during windy days. Unless you can see a gobbler in a field, you will need to have to set up adjacent to an open field or powerline in an area where you know turkeys are located.

The rain will muffle the sounds, both of the hunter and turkey. On rainy days, a gobbler will often approach your calling position totally silent. Best bets for calls are usually air-operated calls such as a multi-reed diaphragm call or a tube call. Neither of these calls is adversely affected by wet weather and a hunter can get the necessary high pitch and volume to carry the sound through the rain a long distance. There are friction calls with special strikers that will also work. But prepare in advance, have the calling tools you will need for this type of hunting in your turkey hunting vest. If I can see a bird, I'll began calling loud enough for the bird to hear me, which can be rather loud if it's raining pretty hard and the bird is a good distance away. Sometimes he may seem to ignore the calls for a while, but he'll probably cut a glance in my direction, confirming that he's heard the call. It could take him a while to approach and he may not approach in a direct manner. Often, a gobbler will walk to the edgeline and approach along the edge of the field, so be ready.

If you read my articles, you know that I always encourage you to take a young person hunting or fishing. There is a special youth hunt on the Saturday and Sunday prior to the opening of the season. The regular season shooting hours, bag limits, and legal arms and ammunitions apply to the special days. Individuals must follow the listed rules to participate in the scheduled youth hunts.

You can go to www.outdooralabama.com for the rules regarding this hunt.

Next month, we'll look at some late season turkey hunting tips as well as spring bass and crappie fishing tips. Until then, be safe in the outdoors.