Mixed Bag Of Outdoorsmen For April 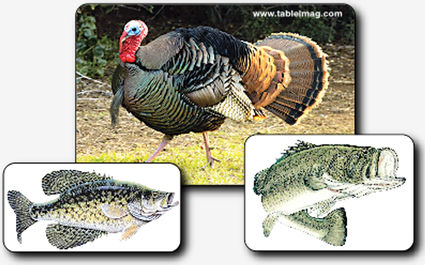 April presents a mixed bag to outdoorsman across central Alabama. Turkey season continues all month, and with warmer temperatures, the fishing is getting better. This month will see turkey hunting transition from really active gobblers during the first half of the month to a slowdown towards the last half. As hens go to nesting, the gobblers will slow down a bit and hunters will have to modify their tactics to be successful. For you fishermen, April finds crappie and bass moving into shallow water to spawn, and this makes them much easier to locate and catch.

Late season turkey hunts are notorious for slow action, so don't expect to go out and call like you did in March. As the season wears on, the hens shy away from toms, becoming more and more elusive as they disperse to their individual nesting sites. Meanwhile, the hot-blooded gobblers are searching tirelessly for another mating opportunity. Near the conclusion of the spring season, fewer and fewer hens feel the need to be bred. This means that late-season toms focus all their efforts on trying to find that one hen that might possibly be interested. It's going to take an adjustment in attitude and approach. Also, by now there are few places left where turkeys haven't been pressured by hunters. As a result, surviving toms are call-shy. With mating drawing to a close, both hens and gobblers are less vocal and typically less excited for action. Rather than running and gunning for toms, bring more patience to the woods.

At this time of the year, you have to be willing to sit in one place and let the birds work to you. First, you should know from scouting where the turkeys are most likely to hang out. Then, you can sit with confidence knowing that the chance of a gobbler being nearby is pretty high. Second, make sure that you are comfortable. Bring a foldout turkey seat topped with an extra cushion. These seats allow you to sit low, but off of the damp ground. Find a large tree to sit against and use brush or a fold out fence blind to conceal the movement of working a call. Call sparingly, every 10 minutes or so, and remember that it is better to under-call than over-call. Plan to sit tight for an hour or two. Again, birds are call-shy and slow to work late in the season. Your patience will often reward you with a shot at a gobbler.

Roosting is also a great tactic for late-season, heavily pressured birds. When the gobblers are becoming increasingly unresponsive, that's when I want to find them the evening before. That way I can crowd them when I set up the next morning. I want to make it as easy as possible for a gobbler to fly down and have to walk just a short distance to check me out. From previous encounters with turkeys, you should have a general idea of where a tom is roosting. Hopefully, you will hear the turkey fly up for the night, and you won't have to utter any sounds to cause the gobbler to sound off. But if you're not fortunate enough to hear a gobbler flap his way to a roost tree, you need to forget the hen chatter that you would normally make early in the season and instead use a barred owl, crow, or hawk call to cause a tom to shock gobble. As a last resort, you can gobble a few times in order to elicit a response. Once you successfully roost a gobbler, wait for full darkness before slipping out of the area.

The next morning, move in really close and set up well before sunrise in the pitch dark. If a gobbler does hear you walking to your setup, you want him to think that it's just the normal movement of animals in the night. The trees are leafed out by now, so don't worry. If you move quietly, you should be able to get within 50, maybe even 40 yards from the tom's tree without him seeing you. Get in position so you won't have to move until it's time to pull the trigger and make some soft tree yelps. Then transition to a few tantalizing yelps and the odd cluck or two. Perhaps the next best step in the teasing process is just to go silent, as you will be so close to the roosted bird that it may cause a longbeard to become suspicious if no visible clues exist to prove that a hen is in the vicinity.

April sees daytime temperatures begin to warm into the mid 70-degree range, and as the water begins to warm, crappie will migrate into the shallows. Broad, shallow flats that offer a wide area across which the sun can penetrate are some of the first areas to warm up on any lake or pond. It helps to have a good temperature gauge because a temperature difference of only 2 or 3 degrees from one area to the next can have an amazingly large impact on the activity of the fish. It's a fact that crappie feed more actively in warmer water so temperature is a key ingredient in catching these fish. Try to locate trees that have fallen into the water, stumps or standing timber. Anyone who has spent time chasing these fish know that they are structure oriented fish.

Small minnows are deadly on spring crappie, as are many artificial lures. A 1/16-ounce jig in either a hair or rubber body model is probably the most popular. They will also readily strike an in-line spinner, a Road Runner or a beetle spin. If the bite is slow, don't hesitate to experiment with different lures and colors until you find what they want.

Bass are also moving shallow this time of the year in preparation for spawning. During the pre spawn as well as the post spawn, I have had a great deal of success using soft jerk baits, hard jerk baits, spinnerbaits and lizards. I look for gravel bottoms in 4 to 8 feet of water and water temperature in the mid to upper 60's. If stumps or downed trees are present, that's even better. Don't overlook piers and docks this time of the year. They can be bass magnets, as the fish move into more shallow water.

Next month, we will explore some post spawn bass fishing tactics and look at ways to help you catch more bluegill and shellcracker. They will be bedding soon, so be sure to read next month's column. And remember, if you have the opportunity; introduce a young person to fishing this spring.