The Cost of Forsaking The Humanities in Education

In 1962, at The Southern Humanities Conference, at the University of Alabama, N. Floyd McGowin, President of the W.T. Smith Lumber Company, was the keynote speaker. His Topic, "Can the Humanities Be Dispensed With In An Age of Crisis?" He opened his address, "I assume that we are using the word humanities today in its original and true sense, and that we shall have nothing to do with the sly distortions of meaning that were insinuated into our language when John Dewey and other peddlers of revolutionary novelties called themselves humanists. The confusion of meaning in our time has become so great that such a newspaper as The New York Times has dared to describe as a humanist such a barbarian as Fidel Castro".

If the English language is to be preserved as a means of communication between rational men, we must protect our words from semantic sabotage and use them carefully in their proper and traditional meanings. We use the word humanities, therefore, to designate the elements of the culture of the mind and spirit, sharply distinguished from every kind of technical skill that might be acquired by a workman, artisan, or practitioners of professions as a means of livelihood. Our English word has this meaning because the Romans called this word humanitas in the firm belief that the study of literature and kindred arts made them men humaniores -- more human:...more human in the sense that they had more fully realized in themselves the highest capacities of human beings through the cultivation of mind and spirit that would otherwise remain latent.

The Romans thus concentrated their interest not only because they understood in every society a few must lead and many follow, but they also realized that the greater a man's talent, the greater is his potential for harm, as well as good. Mr. McGowin outlined many crisis situations in our history, but he saw in the 1960's a crisis in education, and that was the question of what was happening to the study of the Humanities? What significance will it have on the fight for survival of Western Civilization and Christianity? Remember that this address was delivered 52 years ago to Alabama's leading university, where today, the study of the Humanities is in sharp decline, as well as in colleges and universities all over the nation.

He views the crisis America faced, as proof of a cultural and educational weakness. He believed that the Communist Empire could have been broken and destroyed by a modest exertion of strength by civilized nations of the West. Our present danger, in his view, is one that we have created by our folly. "It is a proof of a dangerous lapse of our mental powers---not one of our technical skills, but a lapse of our capacity to use them, for clearly we have failed to protect ourselves because either we lacked either the moral perception that would have recognized evil when it was paraded before us or the intellectual ability to devise the simple means necessary for dealing with it.......The Twentieth Century has been a period of great scientific and technical advance, and of what is generally regarded as material progress, has also been a time of progressive weakness of our national intelligence and practical judgment.---- a time of fatuous illusions and stupid blunders,that have, in their effect, been almost suicidal. It may not be a coincidence that it is also the time in which the humanities have been progressively eliminated from our educational system. Bergen Evans in his recent Dictionary of Contemporary American Usage can say that humanist is almost as vague and confusing a word that there is."

Before the birth of Christianity, there was still a Sovereign God who dispensed Common Grace in the ancient world. Those traditions from Old Testament times, in the ancient world formed the Classical Culture of that time. Even in our imagination, we cannot describe what the world would have been like without the classical foundation of culture. From the Renaissance to my own childhood in the 1930's, no educated person would have dreamed of discarding classical education, and depriving an essential part of our heritage to the rising generation.

When we think of depriving students of understanding their heritage, Mr. McGowin reminds us that "the supreme value of life lies in the excellence and worth of the individual mind and soul. It makes us aware how completely the fundamental ideas of our civilization have been leached away and replaced by alien and barbarous notions. We realize that many of our supposedly educated contemporaries blandly assume that the function of society is to see that the people are fed, clothed, housed, and amused with a minimum of effort on their part,---which by the way, is precisely what the savage asks of life, that is to say, satisfaction of those appetites which man shares with animals."

He continued the address by addressing two issues, both impacting the subversion of our society: The decline of the teaching of the humanities ineducation, and the matter of private property in our economic system. The attacks according to his study were motivated by "a rabid determination that no man shall be morally and culturally above another.--that no man shall be permitted to violate the new and yet tacit dogma that the satisfaction of animal needs and animal appetites is the whole end of man. I suspect that upon close analysis we shall find that the attacks upon private property are in their source not economic at all, and do not arise from an envy of material possessions. They are primarily cultural and motivated by resentment of the self-cultivation that economic security of private property makes feasible."

It is obvious that Mr. McGowin saw Socialism on the march in America, and he saw it as a cultural worldview. The only way to fight it is with a contrasting worldview, one that requires the moral and spiritual dedication to fight the prevailing enemy. We are in a crisis in America. The threat posed by the federal and state departments of Education which further destroys elevating the human mind and spirit through Common Core, (federal control of education). That is certainly not the only threat in Education, but it is one we have been dealing with. Each child in a school desk has been created uniquely by his Creator. He is endowed with a body, mind, and spirit, all three to be nurtured and nourished. Not as an animal to be trained, but as a child made in the image of God, with the hope of eternal life. Each one, with great potential.

Let's be clear. If "matter" is all there is in the universe, if we reject non-material values, ultimately there is no will to live.

A true teacher delights in the potential of the student, the teacher ministers to felt-need, and works to awaken latent ones and desires above all to help that student climb to his highest potential: those big challenges to "know thyself" to discover "what is man", "who am i?"

What American educators are discarding is what made us the envy of the world. Think of Tocqueville's envy of America. He valued our liberty and equality above French Aristocracy.

If the Bible were included in any Humanities course at a secular university, it would be a denial of its own claims. Allan Bloom, in his book, The Closing of the American Mind, offered this insight The Bible is treated "in one of two ways. It is subjective to modern "scientific" analysis, called Higher Criticism, where it is dismantled, to show how sacred books are put together, and that they are not what they claim to be. It is useful as a mosaic in which one finds the footprints of dead civilizations. Or else the Bible is used in courses on Comparative Religions, as one expression for the need for the sacred, and as a contribution to the very modern, very scientific study of the structure of myths. A teacher who treated the Bible naively taking it at its word, or WORD, would be accused of scientific incompetence and lack of sophistication." (p374). He appeals for the study of Philosophy Writing is 1987, Dr. Bloom appeals to the Education world, "Our problems are so great, and their sources so deep that to understand them we need philosophy more than ever, if we do not despair of it, and face the challenges on which it flourishes......This is the American Moment in world history, the one for which we will ever be judged. Just as in politics the responsibility for the fate of freedom in the world has devolved upon our regime, so the fate of philosophy in the world has devolved upon our universities, and the two are related as never before."

Just about the time that Allan Bloom's book, The Closing of the American Mind, was published, David Barton published his first book, America: To Pray of Not To Pray. The book was a statistical look at what has happened to American education since Prayer was ordered out of public schools. In June, 1963, 39 millions students and 2 million teachers were forbidden to pray in school. Since that time, David Barton documented the changes in American Education, and he has continued through the years to collect and document research that further proves the damage of that fateful decision when corporate public prayer was outlawed. Using graphs, the book shows the decline of student morality, the increase of sexual activity, teen pregnancies, sexually transmitted diseases, divorce rates, single parent families, the decline of student achievement and test scores, rising violent crimes among the young, increased alcohol consumption, illegal drug use among the young, and illiteracy. His website, www.Wallbuilders.com, is a great and trusted resource.

All of the above is shared in hopes that the readers of the Gazette will become informed and involved, in order to strengthen the Judeo- Christian worldview which is being attacked. Your first contribution to the spiritual battle at hand is to pray. Pray specifically for every official at every branch of our state and national government. Please pray for the millions of children in government schools. They may never read Ben Franklin, as Social Studies have replaced history in government schools. However, these are his words, reflecting his knowledge of Psalm 127:1 and his love for our country.

"We have been assured Sir, in the Sacred Writings that except the Lord build the house, they labor in vain that build it." Benjamin Franklin 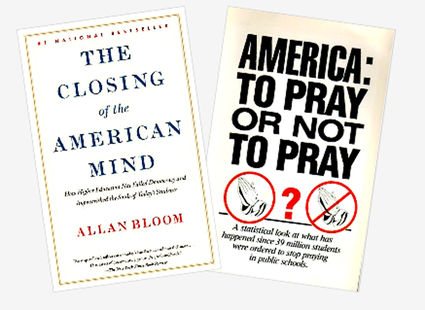 Can the Humanities Be Dispensed With In An Age of Crisis?

The Closing of the American Mind. Allan Bloom, Author