A Portrait of Patriotism 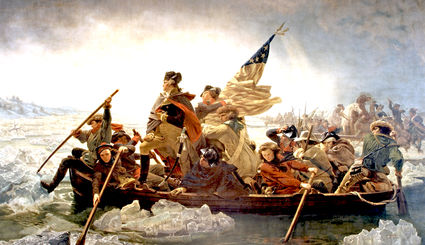 This story of Patriotism begins in the life of a nine year old boy, standing on the deck that would bring his parents, his sister, and Emanuel Gottlieb Leutze, up the Delaware River, to dock at the port of Philadelphia. Suddenly, the outline of the city, the largest city in the New World was visible, the church steeples, the tall buildings. Soon his feet would touch the ground of the United States of America, where he was coming to live.

Emanuel Leutze was born March 24, 1816, in Gmund, Württenberg, Germany. The village, 31 miles northeast of Stuttgaart, was famed as a center for silver craftsmanship. His father, Gottlieb, was a skilled metal craftsman, who brought his wife, Catherine, daughter, Louisa, and son, Emanuel, to America to escape political oppression. Germany of the early nineteenth century had been completely humbled by Napoleon, and her people frustrated. Poverty ridden citizens were disillusioned. Stories of freedom for all peoples in far away America of their Revolution offered hope.

Emanuel's mother, Catherine, had been married earlier and had two sons by her first husband. who died young. Son Jacob had emigrated to Pennsylvania in America, and offered them encouragement for such a venture. Emanuel's father, Gottlieb, was successful in a comb manufacturing business, and he concluded that he could be successful in the New World. Beginning with his life savings, and his manufacturing equipment, and with State permission, they sailed in the summer of 1825, on the sloop, The William Henry. Joining with other German-American colonists who had settled mainly in the Pennsylvania and Virginia colonies, and had fought for the American side in the Revolution for Independence. The German-American Patriotism was a sharp contrast with many of the English colonists still torn between loyalties.

Emanuel had no doubt heard the stories of the Rev. Heinrich M. Muhlenberg, patriarch of the Lutheran Church in America, a great lover of freedom himself, and whose son, John, was Colonel of the Eighth Virginia Regiment, personally commissioned by George Washington, his intimate friend. In the Colonel's Valedictory Address, in 1776, he calls his soldiers: "The endangered fatherland, to which we owe wealth and blood, needs our arms----it calls its sons to drive off the oppressor. The Holy Scriptures says, There is a time for everything in this world. A time to talk, a time to be silent, and a time to preach and to pray. And also a time to fight and this time has come. Therefore whoever loves freedom in his new fatherland, he may follow me."

Young Emanuel absorbed all the stories of the Revolution, and his love for even the sight of the Delaware River would be destined to last his lifetime, so evident as his life story unfolds. He lived near it in Philadelphia, and traveled on it extensively throughout his life.

Although his father was well trained and successful as a silversmith, he contracted an incurable disease and his wife, Catherine, could hardly keep the business going of making combs. It was necessary for Emanuel to quit school in order to help the family survive. He was young but sought odd jobs for a small pay. Every spare hour that he had to himself would be spent observing the art collection at the Pennsylvania Academy of Fine Arts in Philadelphia. Established in 1805, it was the first and most noted art collection in the United States. It's beginning was in the dreams of Charles Peale, in 1791, for a great school of art to encourage and attract the gifted young Americans. The first major exhibition was held in Independence Hall in 1805, and centered on the History of American Art. The Franklin Institute and the Peale Museum were in close proximity for this small boy, who longed to study art, and one day paint America's story on canvas.

Not having the money to study, he took his sketch book to the museums, and for hours, would study the oil portraits of the founders of our nation. He was absorbed with the stories of Columbus and already painting scenes from 1492. As he grew older, he absorbed everything that he would learn about George Washington, the father of his adopted country. He knew in his heart that he was destined to be a painter and that he would paint scenes of the history of our country. He would strive for excellence as an honor to those artists whom he studied in the museums: Benjamin West, Thomas Sully, John Trumbull, Henry Inman, and others. Dreaming was his escape from the sadness of his father's illness, and the deep distress of the mother he adored. In the midst of it all, he was the encourager to his sister, Louisa, assuring her that he would always be there for her.

Trumbull's dramatized scenes from American History, "Burgoyne's Surrender at Saratoga," "Cornwallis; Surrender at Yorktown," "The Signing of the Declaration of Independence," and other historical paintings brought him to envision the climax to his life's work would be to paint the scene for the most glorious of all the events of the Revolution. His painting would have to be massive and it would have to show the courage and the danger, and point to what ultimately brought success. Even among his dreams, he knew what he must learn to bring this all about. He must study how to bring faces to life, how to draw details of clothing, and positions of the human frames, and much more. All the while he was dreaming, he was taking odd jobs to help his mother and sister. In the Philadelphia Directory of 1831, is listed, "Catherine Leutze, widow of Gottlieb Leutze, comb mfgr." His father had died, and he felt responsibility for the family.

Scarcely twenty five years after his death, books about George Washington were circulating. Though few books were published then, the most prominent story in oral and written print was the story of George Washington crossing the Delaware River. Around the corner from the Leutze home, was the home where Betsy Ross lived and made the first American Flag for George Washington from a sketch he gave to her. Just four squares away was the Presidential residence of George Washington. Nearby was the spot where Ben Franklin had experimented with a front door key in one of his electricity experiments. We can just imagine how he internalized these stories of independence and liberty, and possibility for all.

As his art work improved, he entered contests and won! He attended the Washington Birthday Ball at the White House when he was 20 years old, and quickly became known. Washington would become home for a time, and then he moved to Fredericksburg, VA. This was a time of tremendous growth through a chance meeting with a prominent citizen, John Minor, who served as a mentor and secured commissions for him. His first large canvas painting was of Hagar and Ishmael, a scene that focused on hardship and the overcoming power of the valiant. His charm, good looks, and obviously being a promising painter of the day placed his name on many tongues. Having a prominent aristocratic patron in John Minor, was a great blessing. Minor had given up his law practice, and concentrated on Virginia History. He promoted the fables of Br'er Fox and Br'er Rabbit, and had them published widely.

With growing success in America, Luetze still felt the need of going to the center of the Art World in Europe. He chose to study in Dusseldorf, Germany, the home of his birth. During the daylight hours, he painted, and in the nighttime, he studied German and Art History. He delighted the art critics, and before long, the word "genius" was attached to his name in Germany. His work was prominent in American, and now in Germany.

He was invited to exhibit his Columbus painting in the most prestigious Art Academy, where the most revered master teacher, Karl F. Lessing, offered to give him lessons. Lessing's own paintings "depicted grand historic characters whom he seeks to honor." This will also be said of Luetze's painting of "Washington Crossing the Delaware," that it too depicts strong men who were the soldier-patriots who opened the door for Liberty for All. How proud Luetze would be that both his son and grandsons were Admirals in the US Navy, and that descendants are patriots today.

Years in Europe was successful in every way. He returned home with a dearly loved wife, four children, and fame. His boyhood dream of painting George Washington crossing the Delaware River was realized on a canvas 20 feet by 12 feet. The painting portrays the turning point in the War for Independence. Ann Hawkes Hutton, an authority and author on both Leutze and the painting, explains that the artist knew that his canvas "must bring to life that dramatic epoch in human affairs. It should portray that moment in Washington's career, when his thoughts, preparation, and experience converge into an action destined for victorious achievement. The face on the canvas must mirror his leadership and should reveal calm confidence to overbalance the fears and anxieties of the hard-pressed American troops. It must show nobility without aloofness and dignity without dullness."

Hutton cites the portrait as the climax of his career in his own mind. He had made endless sketches of Washington and separate sketches of every individual before the group was assembled in the painting. Washington is the central figure, of course, wearing yellow knee breeches. high boots, a dark coat lined with yellow, a gray military coat lined with red, and a black cocked hat. His sword hangs at his left side, and in his right hand he holds a spy glass. His expression dominates the painting, in the same way that his personality dominates the crossing itself, and the ultimate success of the American Revolution

Most of the boats in the crossing were Durham boats ordinarily used to haul iron from the Durham furnace near Easton, Pa, down the Delaware to Philadelphia. Though the American Flag had not been adopted in 1776, it was rightly used to symbolize the new nation. Actually, Washington no doubt, flew a flag on the boat. We just don't know which flag. Remember, that Betsy Ross made the first American Flag from the sketch Washington gave her.

The famed canvas was exhibited in 1851 in the capitol of the United States and later owned by the Metropolitan Museum of Art. Leutze painted numerous smaller versions of the painting, and exhibited in numerous exhibitions. The original one, owned by the Metropolitan Museum of Art was loaned to the Washington Park Crossing, which was like a "homecoming" for the painting. At one particular exhibit in New York, patrons were reminded, of the man and the hour: "It was the gloomiest time of the long, weary, and the unequal strife, with the gigantic power of England, that the passage of the Delaware took place. The darkest hour of the night overshadowed the noble spirits that held in their keeping----the welfare of their country-----the freedom of the world, but they quailed not, for he who was their leader stood firm amid all their peril, hopefully before them, and resting under God, on His unequalled wisdom and fortitude, they then saw that the deepest night does foretell the coming day, for the dawn of their liberty---dim, rayless, almost chilling. But still dawn----.soon struggled through the gloom.----With his eyes fixed calmly on the desired shore, stands the Father of Our Country."

In his Farewell Address, Washington still speaks to us today, of Patriotism, "The name of American which belongs to you, in your national capacity, must always exalt the pride of Patriotism."

Acknowledgement of a primary source for this article: