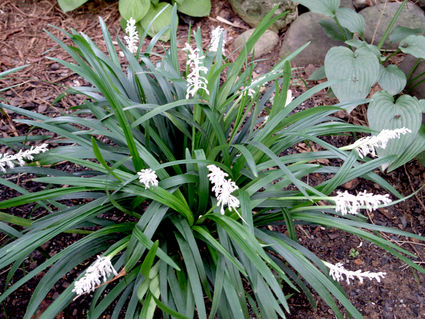 As I was busy hoeing out the pink and white buttercups or Oenothera, which proliferates like mice, someone tapped me on the back and wanted to dig out the rest to replant in their garden. the first question I asked, was why? They responded that it is so delicate and beautiful appearing so easy to grow. They wanted to relocate it before it turned to seed so they would have more next year. And I said," it is ok with me, just know that they can get away from you, quickly". Which brought up the saying, one man's weed is another man's flower. We all have some prejudices on flower preferences, such as, I have a friend who hates petunias, and another lantana. Beats me as to why, so I searched my feelings about flowers, and came up with a slight loathing for flowers that do not drop their dead heads, which means constant dead heading. So after soul searching, I can understand these prejudices.

I have a back area of a bed at the farm that just does not get enough water after the taller plants get up. I do not want to pay to change out the sprinkler heads, so decided I may just find a way to have both situations and not cost me an arm and a leg. I will call these tough plants which are drought resistance, well with some water, and are acceptable. they have to measure up to some criteria such as summer blooming, sun loving or five hours of sunlight per day, relatively pest free, and reliably good bloomers. My list includes:

Some of these plants can be purchased, and other will have to sown into the garden right away.

I found an old, old out of print garden book I had purchased in London 20 years ago. In the front of the book, it detailed some flowers to grow in the garden for an outdoor wedding. At the end of the chapter, I noted this ditty. "Black-eyed Susan married Sweet William after he Aster. His rival had been, Ragged Robin, but the groom's Tulips sealed the engagement. Their Four O'clock wedding was announced by the Bells of Ireland and Bluebells. The bride was given away by Poppy and Jack in the Pulpit officiated. Let not the Passionflower love affair, made under the Star of Bethlehem, turn into Touch-Me-Not."

PLANT OF THE MONTH

MONDO GRASS (Orphiopogon japonicas)--If this is not a signature plant of the South, along with the Cast Iron Plant, nothing else is. Mondo has so many uses in the garden that is hard to name them all. One use is as a border grass, lining beds, pathways and curbing which is my least favorite of its uses. It is a wonderful ground cover on steep banks, under Magnolias, Oak trees, and other hard to grow spots. Once established, it is drought tolerant, spreads easily, and is virtually pest free. Mondo will grow just about anywhere from full sun to dense shade. There are many interesting kinds of Mondo such as variegated and a giant type that grows to nearly two feet. Once it is established there is no worry about it dying off as it can last a half century. If you are looking for the perfect plant to grow between stepping stones, try Orphiopogon planiscapus 'Nanus, which has a tightly tufted structure. Another great feature of Mondo is that it is evergreen. Mondo can also be a pass along plant for neighbors and friends. Dig up some clumps along the edges and it fills right in. All plants have some type of bloom, and mondo has very inconspicuous spikes of pink flowers close to the ground hidden in its foliage. Birds like to feed on its bluish metallic berries held on short spikes.