Which Is Most Important? 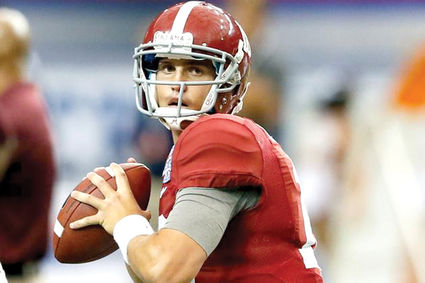 The truth is that all three are very important. But another factor in the success of a football team is injury luck. That means if the team has good coaching, good talent and a favorable schedule, but don't lose any key players during the course of the season, the talent level will not drop below good. This is called injury luck. Then there is the other major factor, schedule luck. Take the Auburn Tigers for instance. They play a formidable schedule in 2014 which includes Kansas State, LSU, Mississippi State, South Carolina, Ole Miss, Texas A&M, Georgia and Alabama. That schedule includes eight teams that will be ranked in the top twenty-five. Let's assume that LSU, South Carolina and Georgia lose some key players and are not at full speed when they play Auburn, or are not really as good as advertised. In this case, Auburn has had schedule luck.

Since Auburn and Alabama are being considered as possible teams to make the first play-off for Division I schools, we will take a look at their schedules for 2014 and see what they have to do to make this historic play-off. Alabama has the best chance according to most of the pundits who spend their time worrying with these type things. So, we will look at the Crimson Tide first. We will analyze the Auburn schedule next month!

Provided that Jacob Coker, the junior transfer from Florida State, gives Alabama the quarterback skills and leadership that coach Nick Saban wants, the Tide can have a real shot at the play-offs this year. Everything else is in place. He is the missing piece of the puzzle. They have the best set of running backs in the country. They have the best set of wide receivers in the country. They have an experienced offensive line. The defense is always good under Saban. It will be again this year. There is a lot of anxiety among the Crimson faithful as to how the new offensive coordinator will perform. Lane Kiffin is the fourth coordinator that Nick Saban has hired in his seven years of leading the Tide. Rest assured, the offensive coordinator at Alabama only does what Coach Saban has approved. That will not change.

AUGUST 30 - West Virginia is Alabama's opening game in Atlanta. This is the third straight season that Alabama opens the season at a neutral site. It is also the first meeting between West Virginia and Alabama. Not to worry. The Mountaineers have a goofy coach by the name of Dana Holgerson who hasn't learned that blocking and tackling is the first order of business.

SEPTEMBER 6 - Florida Atlantic in Tuscaloosa is like throwing a very game squirrel in a bear's cage. Blake Sims will have a good second half.

SEPTEMBER 13 - Southern Miss will enter Bryant Denny Stadium all fired up. The Golden Eagles have been a thorn in Alabama's side since they beat Alabama 7-0 in 1953 in Montgomery's Cramton Bowl. Their record for the last two years is 1-22. Coach Todd Monden, in his second year, will see how far he has to go.

SEPTEMBER 20 - Florida comes calling for the third straight Alabama home game. Coach Will Muschamp's four year record is 22-16. Following Urban Meyer has not been fun for the former "head coach in waiting" at Texas. Even worse was last year when the Gators were 4-8, hardly what fans are used to in Gainesville. With new offensive coordinator Kurt Roper coming over from Duke, there is some optimism that he can put some teeth in the Gators. I do expect Florida to be better this year but at the end of the year they could wilt again after playing Alabama, Tennessee, LSU, Missouri, Georgia, Vanderbilt and South Carolina before their semi-annual trip to Tallahassee. That is no formula for a successful resurgence.

OCTOBER 4 - Ole Miss will be waiting on the Tide to ride a few miles down to Oxford hoping their pre-season hype is not just pre-season hype. There is just something about Coach Hugh Freeze that I have not bought into. Everybody is picking the Rebels to be a top twenty team. They may be with six offensive starters returning and nine defensive starters returning. This could be a trap game for Alabama after a week off, but, I don't see it.

OCTOBER 11 - Arkansas catches the Tide in its second road game. Coach Bret Bielema is coming off a 3-9 season, his second at Fayetteville. His attempt to turn the "Hogs" into the "Wisconsin of the West" has been less than spectacular. Beefing up the Razorbacks will help his brute force approach, but the SEC is already brutal. No chance. Alabama wins.

OCTOBER 18 - Texas A&M comes to Tuscaloosa without Johnny Manziel. Coach Kevin Sumlin has been lauded all over the country for his revival of Texas A&M. He needs to thank the former staff for recruiting the best college quarterback I have ever seen, "Johnny Football". Sumlin had a good record at Houston before moving to College Station. He is a good recruiter. This year will tell us really what kind of coach he is. With fourteen returning starters, Coach Sumlin has a good nucleus, but the one starter that he won't have back is the one that concerns me. Alabama finally beats A&M at home.

OCTOBER 25 - Tennessee will be waiting in Neyland Stadium, hoping to upset Alabama on Shield-Watkins Field. Coach Butch Jones didn't inherit a tough football team from Derek Dooley last year. Dooley forgot everything his daddy taught him about defense and having a sound running game. Coach Jones is gradually getting a few tough as well as talented football players to come and wear Tennessee Orange. His first year they played hard but still came up with only five wins. Jones will probably take the Vols to a bowl in his second year, but they won't take Alabama.

NOVEMBER 8 - LSU at Baton Rouge is no picnic. Coach Les Miles has done well with Saban's Tide over the time Coach Saban has been at Alabama. There is still this idea that Miles has had success because of what he inherited from Saban. That's old news. Miles will be starting his tenth year in Tiger Town. Despite his unorthodox decisions, his overall record at LSU is 95-24. Their schedule in 2014 is very favorable. Only Alabama and Auburn stand in their way. This one looks like a toss-up to me.

NOVEMBER 15 - After getting knocked around in Baton Rouge, Alabama will host the most physical team in the SEC when the Mississippi State Bulldogs come to town. Coach Dan Mullen is in this sixth year with the Bulldogs. His record is 36-28 including four bowl games. Everyone in Starkville is expecting this to be his best team. So are the experts. This means that Alabama can't be thinking about LSU or Auburn. They have a tough battle in order to subdue these Bulldogs. This they should eventually do.

NOVEMBER 22 - Western Carolina will provide an opportunity for Alabama to heal from encounters with LSU and Mississippi State. Coach Saban probably won't do it, but it would be smart to take every starter out before the half. One senseless key injury would give Auburn an even better chance than they have.

NOVEMBER 29 - Auburn comes to Tuscaloosa either battered by a tough schedule, or flying high on eagles wings ready to take the SEC West away from Alabama again. For me the Iron Bowl was in Birmingham where Auburn and Alabama played every year from 1948 to 1989. Coach Ralph "Shug" Jordan was asked about his thoughts about not getting a good bowl bid one year. His answer was, "I'm not thinking about it at all. I'm thinking about 'The Iron Bowl'." The name stuck. It's alright if you still want to call it the Iron Bowl. It's just not the same to me.

So, to sum up the Alabama of 2014, they will be favored in every game. They will put the best team on the field every Saturday. Only a Sabanese decision will prevent a 11-0 regular season record and a chance to go all the way. Beware! Beware! of the Alabama kicking game. It has cost them dearly for three years. It could cost them again!

NEXT MONTH WE WILL DO A GAME BY GAME ANALYSIS OF THE AUBURN TIGERS 2014 SCHEDULE.