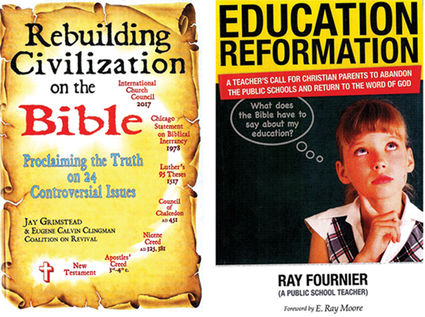 By removing these primary sources of our true history from America's classrooms, recent generations have been taught, yes, EDUCATED to question our historic, orthodox, evangelical Christian roots. This brought about the frenzy of separation of church and state.

The roles of the church and state were discussed at the Constitutional Convention. Many of the states had their own established churches and feared a national government might overreach with increasing power. The First Amendment settled that issue. The States were free to continue their established churches, at least for a a long time.

The first time that we encounter the separation of church and state came through the influence of the French Revolution, and it was not widespread. All colonies were Christian republics. When the colonists landed on our shores, they were Englishmen, but the colonists did not consider themselves part of England any longer, although they were under a feudal monarch. They were self-governed, with their own colonial governments.

After the French and Indian War, the English Parliament tried to usurp power from the American Legislatures, and Americans declared their Declaration of Independence, and fought a war to settle the matter.

Requirement for holding office in all colonies was restricted to people of faith in Trinitarian Christianity, and the infallible nature of the Bible. There are court records across the colonies to testify that atheists were barred from giving testimony in courts.

Alexis De Tocqueville, in his American travels, reported that a New York judge in 1831 disqualified an atheist witness, declaring, "that he had not before been aware that there was a man living who did not believe in the existence of God; that this belief constituted the sanction of all testimony without such a belief." Democracy in America, Vol,1,1841ed. p.344

The Constitution reflects Christian moral laws. The framers provided checks and balances because of the sinful nature of man and the distrust of power. It reframed from any regulation or control of religion. America has never been without problems, because her citizens are sinners. However, Biblical Christianity was in the hearts of the vast majority of her citizens for a long, long time. This was clearly reflected in the laws of communities, states, and the national government. The Northwest Ordinance provided free land for Christian schools. For many decades Christian schooling was the norm in colonial America. The Unitarians were the first to establish state boards of education and state controlled education.

For Christians, and others committed to the moral absolutes of the Bible, there is the challenge today to restore America's Constitutional Republic, and a culture that reflects this worldview. From the earliest, most ancient times, there has been destruction of cultures, and rebuilding. Isaiah 58:12 reminds us that there will always be a remnant."Those from among you will rebuild the ancient ruins, you will raise up the old foundations and you will be called the repairer of the breach, the restorer of the old paths in which to dwell."

As painful as it is to face today's reality, we must, for the sake our children and their future:

"Out of an average of 30 high school students, 15 are sexually active 1

23 believe that homosexuality is an acceptable lifestyle 2

12 of them have used marijuana 3

9 admitted stealing from a store in the last 12 months

24 admitted lying to their parents about something significant

18 admitted cheating on a test in the last school year and even though they had done these things,

28 out of 30 are satisfied with their personal choices and character. 4"

Between 70% and 80% walk away from church by the end of their freshman year in college 5. That means that 7 out of 10 of our children will not be reared in the discipline and instruction of the Christian faith. Another research group has found that half of those leaving the church have actually lost interest by middle school 6. Keep in mind that 89% of Christian parents have their children in public schools.

5 Southern Baptist Council of the Family, 2002

Through the centuries, when false teachings have corrupted a culture, church leaders have joined together calling God's covenant people back to Scriptural Truth. Church leaders or numerous denominations, and many from across the world, have united their efforts forming an organization for such a time as this. The International Church Council Project. Their recent publication, Rebuilding Civilization on the Bible, is a weapon targeting 24 areas of false doctrine which to a large degree have infiltrated the modern church, and certainly the culture. The authors advise the readers that the book does not represent ALL that the church should believe, but rather the "24 battle lines on which the enemy is currently attacking the church." It will be obvious to the reader that the same false teachings have long been primary in the secular education institutions of elementary, secondary and higher education. Poison has permeated today's culture, and the family structure, as well as the church, all have been the targets.

The book, Rebuilding Civilization on the Bible, is the work of many theologians across denominational lines, and compiled and edited by Dr. Jay Grimstead and Dr. Eugene Calvin Clingman. Meant to be a very personal call to action, it provides the tool we need to be equipped for spiritual warfare. The goal is to join forces, to identify those of like mind, to enlist others, to be bold in proclaiming the Truth.

The twenty-four documents are available to download free at the International Church Council Project website: www.ChurchCouncil.org The documents clarify the clear teaching of Scripture on the issues bringing confusion and deconstruction of our Christian culture. Published in 2014, the 300+ page book, published by Nordskog Publishing Company in Ventura, California, is available through our ministry, and can also be ordered from the publisher, or through Amazon. To review the book, anyone may contact me through Emerald Mountain Christian School at 567-0555.

Jude's admonition has never been more relevant than today: "Contend earnestly for the faith which was once delivered to the saints....for certain men have crept in unnoticed.....who turn the grace of the our God into lewdness and deny the only Lord God and our Lord Jesus Christ." Jude 1:3-4