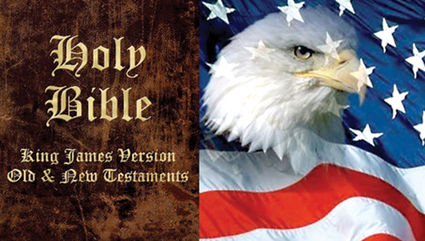 Our Forefathers not only crossed the Atlantic Ocean to found America, but they overcame the ecclesiastical, political and social ideas of the past. They had come against the ideas of the infallibility of the church and its hierarchy in the great Puritan movement. They had rejected the Sovereignty of both pope and king.

They rejected tyranny whether in church or state, and they accepted the infallibility of the Scriptures. II Timothy 3:16, "All scripture is given by inspiration of God, and is profitable for doctrine, for reproof, for correction, for instruction in righteousness." I Peter 1:19-21, "But with the precious blood of Christ, as of a lamb without blemish and without spot: Who verily was foreordained before the foundation of the world, but was manifest in these last times for you, who by him do believe in God, that raised him up from the dead, and gave him glory, that your faith and hope might be in God." The church in America would be Biblical, local and self governing.

When in the past, man's status was set by his rank or authority in the hierarchy, Americans were equal as created by God, before His law, and before Civil law. Liberty would be God-given, and inalienable. This was America, and it was indeed, A New World. Welcome to the New World of Man and Government. Americans lived in voluntary union with others, and lived in liberty of conscience under God's law. 1 John 1:7, "But if we walk in the light as he is in the light, we have fellowship one with another, and the blood of Jesus Christ, his son cleanseth us from all sin."

If we had to define Postmodernism, we could safely say, "It is an attack on Biblical Christianity." Since the 1960's and 70's there has been a major change in the culture because of this philosophy. It penetrated the universities and institutions of learning throughout America, without the masses of Americans even realizing it for the first decades of infiltration. In 2014, it prevails in the public square, as the thinking of Western Society.

In speaking of Postmodernism, Dr. Martin Loyd-Jones viewed today's culture "as lost in sin today as Adam and Eve were in the day that they fell." The Postmodern Man is still hiding from God.

Post Modern Man believes that each person constructs "truth" for himself. A British theologian and pastor, Rev. Erroll Hulse, has written extensively on Postmodernism in a very understandable fashion. You can find his writings on the Reformation Today Series.

He explains," The Jewish Holocaust, Solzenitsyn's revelations of the Stalinist regime's horrors and the Gulag Archipelago, genocide in Africa, Cambodia, Yugoslavia, the ecological crisis, global warming, the Aids crisis, and the abuse of political and military power all brought deep seated disillusionment. No belief system is to be trusted. Indeed, one belief system seems as valid as the next. This attitude has encouraged relativism and bred a fixed aversion to claims of absolute truth. Simply stated, the essence of Postmodernism is that there are no fixed absolutes."

When I studied with Dr. Francis Schaeffer, he spoke of "Post Christianity" and we saw that as we traveled through Europe with him. We now understand that it has come to American culture as Postmodernism, or accurately to say "Post Christianity" in today's culture. It is prevailing in the laws of our land. Our own Alabama Supreme Court is one of the few places we can see a faithful and legal interpretation of the Rule of Law historically.

Evolving law in general in America is "antinomian" to its core. It is "against law" as we have known it in the past. Bypassing the Scriptures, we construct "new truth" to eradicate Morality, and pass laws to make Immorality acceptable; examples are abortion, euthanasia, no fault divorce, sexual identity, and government indoctrination of school children. Does it make us wonder how different we will be from Marx or Stalin, if this continues in our nation?

What are the battle lines for believers in Biblical Christianity? How are we to be armed for combat against it? Dr. Erroll Hulse urges believers first to be informed. "The enchantment of modernity is characterized by technological messianism, enlightenment idealism, quantifying empiricism, and smug fantasy of inevitable historical progress."

The enemy intends to deconstruct our Biblical world view, and substitute a moral relativism where there are no absolute truths. Pluralism guarantees that all religions have a level playing field, EXCEPT for Christianity. Tolerance is crucial to Postmodernism, for there must be NO final authority in that world view.

Existentialism is at the heart...feelings are supreme and they rule. Teaching can easily reach the heart of a student at any age: for good or evil. One of many examples of an education teaching outline encourages a specific attitude (feelings) rather than the facts about The Declaration of Independence. You will recall these words and probably can repeat them by heart: "We hold these truths to be self-evident, that all men are created equal, that they are endowed by their Creator with certain unalienable Rights that among these are Life, Liberty, and the pursuit of Happiness."

In deconstruction, this would be an example:

1. Does the language exclude women? Are only men created equal?

2. Thomas Jefferson penned these words, but didn't he own slaves?

3. We hear about equality and justice, but what about women and minorities?

Is this document hypocritical?

Can we tell that this discussion goes to the heart of a student's FEELINGS?

What can we do to combat Postmodernism in our churches? Pastors have the pulpit and they can boldly preach Propositional Revelation. The writings of Dr. Francis Schaeffer and Dr. Carl F. H. Henry's God, Revelation, and Authority, held firm to the Scriptures and delved into these problems before many others understood the shift from the Modern world to the Post Modern. Dr. Henry, speaking of the Bible's relevancy in our modern age, "Unless the study of Biblical theology finds its rightful preeminence among the priorities of modern learning, there will be no authentic rescue or salvation for modern society." His writing stresses that no modern thought can replace the loss of the Biblical God, a loving Father, who is both above His creation, and at work within it.

Dr. Errol Hulse, writing for Reformation Today, counsels us. "We were created to relate to each other, to have fellowship with the Father, the Son, and with other believers - the assembly of believers who reflect the love of our Triune God (1 John. 1:1-4). Christians are by virtue of their union with Christ brought into the heart of the Trinity, a heart which is love ("God is love"). The Father loves the Son eternally and perfectly: the Son loves the Father and proved it throughout His life on earth. The Holy Spirit infinitely and comprehensively loves the Father and the Son. Jesus referred to our union with the Father, and in that context prayed fervently for the complete unity of His Church. This unity is one of love which, when witnessed by the world, proves to be a tremendous drawing factor.

Let us stand against Postmodernism by proclaiming the wonderful, unchanging truths of God's Word, and by faithfully loving others with Christ's love."

The true God is in Sovereign control. His church is alive in over 220 nations and His Word is in over 1,000 languages. God is not dependent on the United States of America. Should we become the United Socialist States of America, we will have lost our way. The Bible is God's Word without error. It is the absolute Truth of All-time. Wouldn't it be appropriate for every pastor to teach a series on the Moral Law of God and the dangers of Postmodernism? I love the English Puritans and their focus. Had they not understood the Last Judgment, they would not have been so passionate about preaching the glorious Gospel. They knew nothing of shallow thought and "feel good preaching."

Let's say it again. Bold proclamation of God's moral law and all Scripture is the answer to Postmodernism. John 8:32, "And ye shall know the truth; and the truth shall make your free."

We strongly recommend these authors.

The book we recommended last month is available from us, Rebuilding Civilization on the Bible is a "Construct" book to combat Postmodern thought. You can reach me at 567-0555.