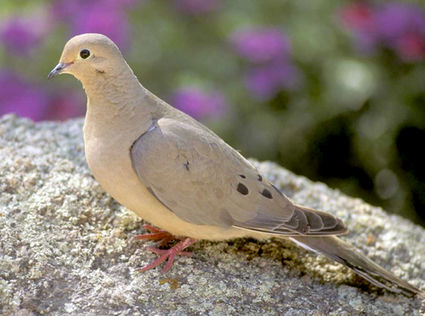 Hunters statewide can celebrate the beginning of dove season at noon Saturday, September 8th. The long-awaited opening day is traditionally considered the beginning of the fall hunting season. Hunting the opening day of dove season is an absolute tradition in Alabama and many other southern states. For most hunters, pitting their shotgunning skills against these speedsters is the ultimate challenge. Mourning doves are not only fast, they can display aerial acrobatics under fire that make them almost impossible to hit. This month, we will look at some tactics that will improve your odds of harvesting these fast fliers, as well as tips to help you select the best spot to set up on a dove field.

In our part of the state, most counties fall into the North Zone of mourning dove season. This zone has a split season, actually 3 seasons, in which you can hunt dove. The first season runs from September 7 to October 6, the second from October 19 to November 2 and the third from December 7 to December 31. Shooting hours are from one-half hour before sunrise until sunset except for opening day, when you can't start hunting until 12 o'clock noon. If you shoot a semi-automatic or pump shotgun, it must have an internal plug limiting it to only holding three shells. Remember too, that all licensed hunters who hunt dove are required by Federal Law to obtain a Harvest Information Program (HIP) permit prior to hunting. HIP permits are free and are available at http://www.outdooralabama.com and all hunting license vendors.

Fortunately for the hunter, doves are fairly predictable. Individual fields may not be covered up with birds on any given hunt, but scouting before the hunt will insure you set up where your percentages are the highest. From a good vantage point, use binoculars during early morning and late afternoon to determine the flight pattern used by doves, the time they start to fly and the sun. You can learn a lot about the dove in just one afternoon. Get your bearings and figure out east from west and then position yourself with the sun at your back. The sun can really hinder your ability to spot dove, much less shoot dove. If having it at your back is not possible try to face where it is not directly in your eyes. Then, locate a good spot to ambush them. The end of tree lines, grown up fence rows or even high weeds adjacent to a grain field can be good spots to hunt. Pick a few spots that look promising, just in case someone beats you to your first choice. Keep in mind that the early hunter gets the best spot and the birds. It's not very smart to spend the time scouting out your spot and come driving up too late to get it. I can assure you, if you've picked a decent spot it won't last long. Whether you are hunting the morning hunt or afternoon, get to the field, take your spot and prepare to be the one doing a lot of shooting. Also, pay attention to the wind when choosing a spot to hunt...dove prefer to take off and land into the wind.

If you can't scout a field prior to the shoot, keep in mind that many "structures" affect the dove's flight patterns in a field. It could be anything from a group of trees in the field, a single dead tree, a fence line, a break in a tree line or an old barn at the edge of the field.

After a dove has been shot at, they become very erratic and will change course on any ground movement. Expert dove hunters will tell you that being still and keeping your dog still is more important than the fanciest camo you can buy. Sure, you'll want to wear some camo but if you are jumping up to shoot way to early, the camo won't help. Dove have keen eyesight and can spot movement from quite a distance, so it's best to wait until the bird is in range, generally 25 to 35 yards, before you make your move.

Dove blend well into their surroundings and many are lost by hunters who take their eye off of a falling bird and shoot at another. Unless shooting over a recently cut grain field or an area with short grass, it's a good idea to watch your bird hit the ground after the shot and go immediately to retrieve it, especially if you're not hunting with a good retriever.

Ten years ago, decoys were seldom used by dove hunters but we've caught on to the fact that doves are flocking birds and they respond well to decoys. Motion type decoys (spinning and flapping wing) have proved to be highly effective. A good decoy spread includes three or four stationary decoys and a couple of 'flapping wing' decoys. The best way to use dove decoys depends on several things. If you're hunting a big agriculture field you'll want to use your decoys to attract and guide the doves to your shooting zone. Begin by placing one where it can be seen from a distance - on a tall tree limb or the top string of a barbed wire fence. Out front, where you'd like to shoot the birds, place two or three dove decoys several feet from each other in a small group with a spinning wing decoy. Another trick is to drag a big downed limb into the field and stick a few decoys on the limbs in addition to the ones on the ground.

As far a being able to consistently hit dove, practicing at your local sporting clay range will help a lot. When taking a passing shot on a dove, regardless of the direction it is moving past the gun, I swing from behind the target and when I see daylight between the muzzle and the bird, I pull the trigger. Because the muzzle is moving faster than the target you will (a) establish the necessary lead and (b) be less prone to stop your swing. Follow-through is critical to dove-shooting success. Stop your swing before you see the bird start to fall and you can count on a miss. The incoming bird is consistently the easiest shot for me to make. To take this bird, you need to address the bird, or put your body in the right position to take the shot. Then start moving the barrel of the gun from below (behind) the bird, continuing to bring the gun up. When you blank out the bird with your gun barrel so you can't see him, squeeze the trigger and continue to pull the gun up, you'll almost always take this incoming bird. When a dove is flying away from you, you want to use the opposite type of lead. As you move the gun barrel down on the dove, blank the bird out, squeeze the trigger and continue the downward motion of the gun. You should then be shooting right under the bird. By shooting under a bird that's flying away from you, you're actually putting the shot out in front of the bird so that he can fly into it.

When selecting a shotgun, a 20, 16 or 12 gauge shotgun will work. Doves are small, have a light and easily broken bone structure, and require very few small pellets to drop them cleanly. Ask hunters who regularly get their limit and you will find, with precious few exceptions, they are using open chokes, usually an improved cylinder, and their shot size preference will never be larger than No. 7 1/2. Most will be shooting 8's or 9's.

This month is also the time to begin preparing your food plots for the upcoming deer season. Late September into early October is the best time to plant, so load up the tractor, bush hog those fields and get them ready for planting. When deciding exactly what to plant in your food plots, many hunters choose clovers, winter wheat, winter oats and Austrian winter peas. Others prefer a good, high quality blend. These are available from Bio-Logic, Pennington and Tecomate Seed Company, so check with your local feed and seed store for these. For the last 3 years, I've planted Buck Forage Oats that I purchased at Farmers Feed and Supply on Fleming Road, and the results have been great. Since changing to these oats, I've had more deer using my food plots than ever before.