What is An American, This New Man in World History? 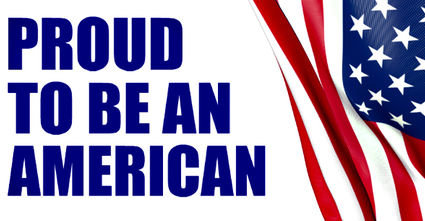 Patrick Henry, speaking in the Continental Congress, 1774, declared; "The distinctions between Virginians, Pennsylvanians, New Yorkers, and New Englanders are no more. I am not a Virginian, but an American."

In a letter to Rufus King, Alexander Hamilton expressed these same convictions. "We are laboring hard to establish in this country principles more and more national and free from all foreign ingredients, so that we may be neither 'Greeks nor Trojans' but truly Americans."

In his Farewell Address, George Washington addressed the same sentiment."The name of American, which belongs to you in your national capacity, must always exalt the just pride of Patriotism. . ."

Indeed the American of 1776 and following, was a New Man. In courage, conviction, and sacrifice, he had declared that the Spiritual is Supreme.

That very first Principle of Americanism, declared in the Declaration of Independence, that all men are CREATED. . . endowed by their CREATOR. . .

Therein lies the First Principle: The Spiritual is Supreme.

The Founding Fathers knew that the First Principle of America was religious in nature. Man is of divine origin and his spiritual nature is of supreme and eternal value to his Creator. His governmental philosophy rests on this First Principle. Never before in all of history has a governmental philosophy rested on the Brotherhood of Man under the Fatherhood of the Triune God. Only in a right relationship with God to man, can man live in the right relationship with God and his fellow man.

As we look deep into the First Principle that the Spiritual is Supreme, we see the duty of everyman to live under God's Moral Laws, to recognize the absolutes that are binding upon all men at all times, under all circumstances. As we understand the remarkable heritage of Civil and Religious Liberty in this light, we see that we will never enjoy these liberties without taking the responsibilities that accompany them. The spiritual heritage cannot be separated from the responsibility of the accompanying stewardship. That stewardship should consider as paramount the protection of these God-given unalienable rights that were the very heart of the Declaration of Independence.

In all the writing and journals of the founding period of America, our forefathers rejected all ideas, theories, and schools of thought, that failed to affirm God as man's Creator, and the sole source of his rights. Government's role was to protect those rights.

Essential in the structure of our federal system was that the proposed federal government would have strictly limited powers, and would not be permitted to have any jurisdiction or power in regard to religion. In the following years, there would be a First Amendment to prohibit Congress from making any law "respecting an establishment of religion, or prohibiting the free exercise thereof." The Founding Fathers' conviction: Every man has supreme value because he has been created by God, and his value has been set by his Creator. Therefore, the government must rest upon this Truth: The Spiritual is Supreme.

In the "Kentucky Resolutions" by Thomas Jefferson, there is this warning: "In questions of power, then, let no more be heard of confidence in man, but bind him down from mischief by the chains of the Constitution."

In Washington's Farewell Address, he speaks of the unity of government which has been built on that very first Principle - that the Spiritual is Supreme. He declares, "Interwoven as is the love of Liberty with every ligament of your hearts...The unity of Government which constitutes you one people is also now dear to you. It is justly so, for it is a main pillar in the edifice of your real independence; the support of your tranquility at home; your peace abroad; of your safety; of your prosperity; that very real Liberty which you so highly prize. But it is easy to foresee that from different causes and from different quarters, much pains will be taken, many artifices employed to weaken in your minds the conviction of this truth; as the point in your political fortress against which the batteries of the internal and external enemies are most commonly and actively (though often covertly and insidiously) directed It is of infinite moment that you should properly estimate the immense value of your national union to your collective and individual happiness. . . The name of American, which belongs to you, in your national capacity, must always exalt the just pride of Patriotism, more than any appellation derived from local discriminations. With slight shades of differences, you have the same Religion, Manners, Habits, and Political Principles. You have, in a common cause, fought and triumphed together."

One of Washington's best known admonitions is this one: "Of all the dispositions and habits which lead to political prosperity, Religion and Morality are indispensable supports. In vain would that man claim the tribute of Patriotism who should labor to subvert these great Pillars of human happiness; these firmest props of the duties of man and citizens." Farewell Address, Sept. 17, 1796.

Fear of government is a valuable lesson of history. The mixture of good and evil is in the heart of man. The resulting abuse of power, the injuries to individual and collective liberties, are predominate in the history of every nation and culture. Would America be able to overcome the sin nature of man being prominent and dominant in the new government? What was the challenge to the American, this New Man?

J. Hector St. John de Créveoeur, a French immigrant, who became a New York farmer, wrote essays in 1782, which were compiled in "Letters From A New York Farmer." He describes the New Man, the American in this light; "He is an American, who leaves behind him all his ancient prejudices and manners, receives new ones from the new mode of life he embraced, the new government he obeys, and the new rank he holds . . . The American is a new man, who acts upon his principles; he must therefore entertain new ideas, and form new opinions. From involuntary idleness, servile dependence, penury, and useless labor, he has passed to toils of a different nature, rewarded by ample subsistence. . .This is an American."

An entire educational system has been built in America, from the days of the Pilgrims and Puritans, up to the 20th century. A system of Biblical Principles were used as the foundation for all knowledge. Dominant in early America, these principles are now only used in a few hundred Christian schools and Home Schools today. Every child is viewed and educated as uniquely Created by God, building on God's Principle of Individuality and Covenant Promise. These schools are zealous for the safety of individual liberty, treasure their God given unalienable rights. The true American today recognizes government's overreach, and the secular religion in government schools.

We understand the wisdom of fearing government. We have seen what Washington meant when he spoke of the "love of power and the proneness to abuse it." We have seen officials' human weakness and love of power, and we have also seen the corresponding weaknesses in the people themselves.

We are inspired by the thinking of unalienable rights, but do we always cleave to the Moral basis from which they are derived?

Government at all levels was created to be the tools for preserving these liberties, the means of securing these rights for future generations. The checks and balances of national, state, and local representation, the boundaries of property rights, parental rights, even our most private and personal decisions invaded - all have eroded American culture, erasing even the memory of our Birthright for recent generations. This is the challenge of Education today, and of the Christian Church, and the family altar.

As a long time teacher of American History, I was always so inspired by Washington. In his first Inaugural Address, he was addressing each and every generation, referring to the Republican model of government. His admonition includes these words: "the preservation of the sacred fire of liberty, and the destiny of the Republican model of Government, are justly considered as deeply, perhaps as finally staked, on the experiment entrusted to the hands of the American people."

In order to protect these unalienable rights given by God, the Founding Fathers recognized that there was responsibility that accompanies every single liberty. There is no "just power" in the world that can morally violate these rights. To be the new man, The New American, each individual at the time of the new Constitution, consented to his own limitations to some degree, in order to secure these unalienable rights.

Elbridge Gerry, writing in 1788, affirmed this in these words, "All American writers on government agree. . . that the origin of all power is in the people, and that they have an incontestable right to check the creatures of their own creation, vested with certain powers to guard the life, liberty, and property of the community. . . "

Limited government was their passion. Alexander Hamilton in Federalist 78, wrote; "The executive holds the sword. . . the legislative commands the purse. . . the judiciary has no influence over either the sword or the purse. Liberty can have nothing to fear from the judiciary alone, (as usurpers) but would have everything to fear from its union with either of the other departments . . . " (in usurping power)

The importance of the national government being decentralized and limited in power, and the careful balance of the greater power in the states, and that limited as well, demonstrates the genius of the Founding Fathers, and their clear understanding that the Spiritual is Supreme. The Protestant Reformation had brought the light of liberty to these shores. Dr. Joseph Warren, one of the GREATS of that generation, wrote in an Oration on March 5, 1772, in Boston, ". . . this eternal truth that public happiness depends on a virtuous and unshaken attachment to a free constitution." And in his state's Massachusetts Bill of Rights, 1780, is this affirmation, "As the happiness of a people and the good order and preservation of civil government essentially depend upon piety, religion, and morality."

And since I am a history teacher, let me add Jefferson's words in closing, "Through education of the young in public schools, the first elements of morality too may be instilled in their minds. . . may teach them how to work out their greatest happiness, by showing them that it does not depend on the condition of life in which chance has placed them, but is always the result of a good conscience, good health, occupation, and freedom in all good pursuits." (Notes on the State of Virginia, 1782) .

Reference: The best book on the subject of America's Governmental Philosophy, as a study guide, is by Hamilton Albert Long, and titled, Your American Yardstick, published in 1963, by Your Heritage Books, Philadelphia.