The Restructure of America Through the "Choice in Education" 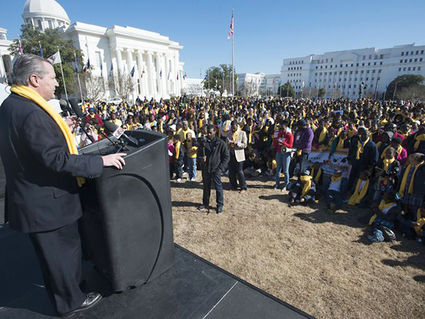 Alabama Speaker of the House Mike Hubbard speaks to school choice supporters during a rally and march at the Alabama Capitol building.

The restructure of the public educational system is far more reaching than the schools. It is the restructure of the Nation through Education. A careful investigation reveals that it is international in scope and entirely socialistic in philosophy. It is promoted by the United Nations, and already, similar methods have been implemented in numerous European countries.

"Choice in Education" sounds wonderful. However, the "Choice" that we are hearing about is not the choice of grass roots parents seeking the best for their children.

This "Choice" originated with the Department of Education in concert with the New American School Development Corporation years ago. All education (school systems) dependent on federal tax dollars will eliminate a true "Choice" for parents, because it will conform to a "national curriculum."

Components of this philosophy have been evident for many decades, but the system itself, thoroughly socialistic and without moral absolutes, has been in place as a cohesive system since Goals 2000 was made public. Goals 2000 was a plan released by President Bush in 1991, with its own Task Force, which planned for a complete restructure of community standards toward national educational goals, with determined conformity by all local public educational systems. And now, Common Core expands the agenda's goals.

Make no mistake in understanding the primary and overall goals:

5. Greater Responsibility on the part of Government to watch over and teach (indoctrinate) pre-school children

Plans to accomplish all of this is by a National Curriculum, National Testing, a National Database, Outcome Based Education, and State Based Decision Making conforming to National Standards.

In Alabama, Christian schools are exempt from conforming to government regulations such as Common Core. But the feds are hoping that they will use a voucher plan or take tuition tax credits, and thus force non-public schools into the framework of the government plan.

From President Bush, to Carter, and to Obama, we hear much about "World Class" standards in every school, and at the same time, they promote "Choice in Education." It can be confusing, can't it?

The aim in "choice" is to increase the government's stronghold and eventually control non-public schools as well. Deceiving parents is part of the plan.

In the last session of the Alabama Legislature, Christian, Private, and Home schools were mercifully protected by law, from government regulation. Many legal experts sound a warning to Christian schools. To take government assistance, is to inevitably waive your right to teach and function as a Christian school, holding the Bible as infallible, inerrant, etc.

To expect federal funds to flow without any control is to be ignorant of the law. For example, in the "Excellence in Education Act of 1991," the bill states: "From funds reserved under section 3(b), the secretary shall conduct a national evaluation of the activities under this Act." This would include implementation of the program, etc. Justice Blackmon acknowledged that the government may call on the recipients of subsidies to relinquish some of their constitutional rights. (May 23, 1991).

Parents who have opted out of public schools, have been paying their taxes to keep public schools operating in addition to paying tuition for their Christian and Private schools. It will be tempting to see "Choice in Education" as a means of increasing enrollment in the Christian schools. If the matter were left up only to the States, it would be a different response.

However, the federal government which has no U.S. Constitutional authority over education at any level, has proven hostile to Christianity, especially in recent years.

Christians already have a grave problem with college age students leaving the church, after attending Sunday School and church all of their young lives. Families are in distress in America as never before in her history. Religious liberty is under attack across America. The glorious light of the Gospel shines brightest against the backdrop of attacks, but only when Christians are informed and carry the Biblical armor of God into battle.

Rev. James Patrick, a thorough researcher and able writer, has made this thoughtful observation: "The United States seems to be drifting away from more than a sound foreign policy. It is drifting away from everything of any value, politically, economically, spiritually and educationally. We are a nation adrift with neither an anchor to hold us, nor a rudder to guide us. Many writers have proposed various reasons for their drift away from our country's original moorings, and I suppose that each has touched upon some aspect of the truth. But let me propose a different view. Could it be that we are adrift because of the deliberate actions of the enemy from within? Is it possible that a Trojan Horse was left at our gates, and we, in a moment of security, opened the gates to the very enemy we oppose?"

For nearly 200 years in America, Noah Webster's definition of Education was upheld in local classrooms across the United States. Education is "the bringing up, as of a child; instruction; formation of manners. Education comprehends all that series of instruction and discipline which is intended to enlighten the understanding, correct the temper, and form the manners and habits of youth, and fit them for usefulness in their future stations. To give children a good education in manners, arts and science, is important; to give them a religious education is indispensable; and an immense responsibility rests on parents and guardians who neglect these duties."

Will we now allow the United Nations to redefine the content and methods of education to produce a Socialist and pagan nation?