Where Do We Find Such Men? 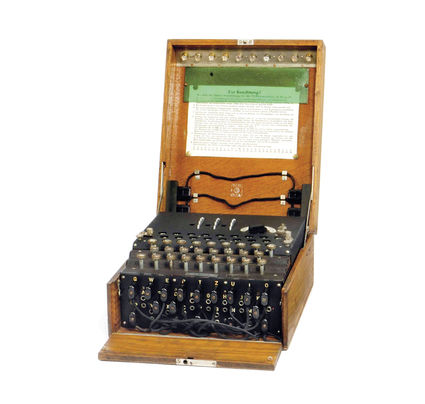 Enigma encoder machine used by the Germans during the World War II, to encode and decode war time messages

With the study of history, we often think of the past as places where our heroes have risen above all obstacles by the very nature of their superior moral, physical and/ or spiritual qualities. We have a high regard for the hero while we somehow ignore or forgive them for their faults and shortcomings; no matter how glaring. We put them on pedestals and think of them, or wish for them, attributes and characteristics that may not exist. In turn, it becomes increasingly easy to give them credit where no credit is due. This is human nature and our study of history is replete with this idea of the "Great Man" doing things above and beyond the call of duty, somehow standing far above other men faced with similar situations and conditions.

In Sidney Hook's, The Hero in History, the author examines two different historical personalities. One is described as the "Eventful Man" and the other as the "Event Making Man." The eventful man, also called the determinist view, can be described as the person who is simply in the right place at the right time. He is merely part of much larger events dominating his era and is born to forces far beyond his control. This man's conduct is influenced, determined and controlled by the outside pressures he is merely reacting to. This character needs a crises, social forces, social machinery and/ or certain ideas, not necessarily his own, in order to fulfill his "destiny." Although he may indeed be coping with outside stressors better than his counterpart and peers, in no way is he in control of them.

There must be some catalyst or series of events that alone propels the eventful man forward. In effect, the eventful man is merely a prisoner of his environment and will only become successful if he can navigate the myriad of situations presented to him. The eventful man in reality doesn't cause his situation he merely rides it.

The event making man or the historical "Great Man," on the other hand, is the character to which we ascribe almost supernatural powers. Not a mere pawn of his surroundings, the Great Man finds the courage and intestinal fortitude to control his own destiny and to successfully manipulate his surroundings to his advantage. Because of this ability to shape and control the events around him, the Great Man becomes a significant part of those larger events by driving them in one direction or the other. The Great Man, through his outstanding character, intelligence, will and/or abilities has the capacity to accomplish his specific goals or purposes rather than allowing himself to be manipulated by his surroundings.

In his book Preface to History, Carl Gustavson discusses four "maxims" concerning the historical great man. First, long term trends are far less likely to be controlled or determined by an individual hero. In other words, there appears to be a limit to just how much an individual can do by himself to shape the outcome of any historical event. Secondly, most cases of great influence throughout history are simply the right man at the right time. Third, "the occasional genius by extremely dexterous and willful actions, may achieve 'historical mutation.'" In other words, can a person actually achieve world-changing greatness through his or her physical actions? Lastly, and perhaps most important maxim is that every historical situation is unique and must therefore be judged on its own merit. No universal formula exists for the determination of the characters that will help shape and define a historical event. We must look at how the alleged "Great Man" affected or controlled his situation.

This brings me to my Robservation. My wife and I just watched the movie, The Imitation Game, the other night and to be quite honest, I was blown away. With all the talk of American Sniper, which I also loved, The Imitation Game has been kind of flying low under the proverbial radar. The story is about British mathematician Alan Turing who was responsible for breaking the German Enigma code. As a military historian, I have been fascinated by Enigma and the British Ultra Intercepts for years but until I saw the movie, I had really done no research into what it took. I highly, HIGHLY recommend watching this movie.

But as I watched the movie, there was the question of the historical "Great Man" that entered my head. A lot of the writing above comes from my book on German super ace Hans-Joachim Marseille where I asked the question whether he could considered the historical Great Man or just the Eventful Man. As I watched this movie, I was awestruck at what makes a man like Alan Turing work. What planet did this guy immigrate from and with what eyes did he see the world? What we have here is a man who in the 1930's envisioned machines that could think. What? Thinking machines, preposterous! He was mocked, accused of spying, taunted and laughed at. Then in the early days of WWII, the Germans came up with a code that was considered to be unbreakable. They ran their messages through an ingenious machine called Enigma that consisted of a series of keys and rotors that gave the Germans the possibility of 59,000,000,000,000,000,000 combinations that was reset every 24 hours. The movie claimed with the code breakers and their methods they were using at that time, it would take close to 20 million years to break just one day's worth of code.

Enter Alan Turing. A man, very much like Sheldon Cooper on Big Bang Theory, Turing envisioned making a machine that could crack that German code within minutes every day. To make a long story short, despite a lot of interference and derision from higher ups and his peers, Turing and his team did just that and broke the code. It is estimated that his breaking the German Enigma shortened the war by over two years and saved over 14,000,000 lives.

Again, where do we find such men? Aside from some of his personal issues and the travesty of how he was treated for being a homosexual (forced estroge injections for chemical castration leading to his suicide in June 1954) here was a man that fits the bill as the historical Great Man in every way. I am not saying he was a great person. That is irrelevant. But from a historical perspective, Alan Turing, in my opinion is one of just a few Great Men from that era.

This socially awkward man from London, out of some kind of master vision in his mind, from scratch, built the first real problem solving computer. He didn't just improve on somebody else's idea; his creation was birthed in his mind. Wow!! Not only that, he did it in a time when thousands were dying daily in the war, victory was in doubt and he and his team knew that they held the key for the defeat of Nazi aggression. Turing was no mere pawn of his surroundings. He manipulated his surroundings to his advantage and controlled the events around him. Turing clearly became a significant part of those larger events caused by WWII and he drove them in the direction they needed to go. He did what was considered impossible by imposing his will on others.

But after I watched the movie, I also thought a lot about other potential historic "Great Men" from that generation who also had such a significant impact on the world. German physicist Wernher von Braun; considered one of the Fathers of rocket science. Yes he built the dreaded V-2 rocket but he was also responsible for putting our first man on the moon. Physicist Robert Oppenheimer of the Manhattan Project; he lead the team responsible for creating the first atomic bombs. Whether these men were Eventful or Event Making, I stand in awe in their contributions to the world. They each had visions beyond their peers and turned those visions into reality.

And one last thing. When I think about what these and others of their generation did to become so special, I have to look at their educational background and then ask myself are we today doing what it takes to create more visionaries like them? Remember, all these accomplishments were completed in the day before computers and they used nothing but pencils and slide rules. Impressive stuff. To Alan Turing, though, the reason for this Robservation, hats off and thanks for all you gave the world, your vision of thinking machines and for ending the war years earlier than it otherwise would have ended. Historical "Great Man?" You better believe it.