Civil And Religious Liberty Are Now In Peril

How do we Reclaim the Legacy of Liberty which brought such Blessing to America?

Whether you are introduced to the writing and impact of John Locke, Samuel Adams, Patrick Henry, George Washington, John Adams or Thomas Jefferson, on America's past, you will discover that they all held a "Christian idea of man and government." Each one knew beyond doubt that Grace and Truth came through Jesus Christ (John 1:17). They knew that Liberty is an indwelling spirit that frees the mind and heart of the man who experiences true liberty. They understood that "Life, Liberty, Property" were gifts from the Creator God. They knew that Government is a Science that must be based on Biblical principles, and they determined to fashion it "for a free and independent man."

Paganism had plagued the world. The individual had value, only as regarded as value in the political fabric of his day. With Christianity came the Good News that every man has value. Made in the Divine image, man is destined for Immortality. A new idea of government emerged. Whereas, man had been viewed in terms of value to the State, now, the Christian views the State as obligated to protect man's Liberty to exercise Justice, and to protect the common good of all men, as much as possible under law.

As the Good News of the Gospel moved Westward, America became a model which would be the envy of the world. Building on the Reformation in England, our Founders understood both the political component and the religious component that MUST Co-Exist as essential parts of God's Providence. Our Founders were passionate in their worship, seeking to recover the Primitive Gospel of the Scriptures.

John Winthrop's "Little Speech on Liberty" spoke of two kinds of liberty. "One is the liberty of nature. It is the liberty to do evil as well as to do good...the exercise of this liberty makes men grow more evil, and in time, to be more evil than brute beasts. This is that great enemy of truth and peace..." Winthrop describes the other kind of liberty... "I call civil or federal. It may also be termed moral, in reference to the Covenant between God and man, in the moral law, in the politic covenants and constitutions, among men themselves. This liberty is the proper end of authority, and cannot subsist without it, and it is a liberty to only that which is good, just and honest. This liberty you are to stand for, with the hazard (not only of your goods, but) of your lives, if need be.... It is the same kind of liberty wherewith Christ hath made us free." Winthrop, "Twofold Liberty," 1645, New England.

The spirit of America was unique. Government was based on Representation, with the will of the majority prevailing. Law in conformity with God's Law, would be the supreme rule. That would be set in a formal Constitution, as the Supreme Law of the Nation. To succeed, for government to prove useful and wise:

(1) The people must be educated in every village and city.

(2) A high Priority must be placed in the diffusion of morality and the Christian religion to all of its citizens.

Reflecting on History and the Providence of God in the founding of the American Union, Daniel Webster stated, "Those blessings [,] our fathers have tasted, and we have tasted, and still taste. Nor do we intend that those who come after us, shall be denied the same high fruition [enjoyment]. Our honor as well as our happiness is concerned. We cannot, we dare not, we will not, betray our sacred trust. We will not filch [rob] from posterity the treasure placed in our hands to be transmitted to other generations." Boston, 1851.

George Washington clearly stated that, "the foundation of our national policy will be laid in the pure and immutable principles of private morality, and the preeminence of free government be exemplified by all the attributes which can win the affections of its citizens, and command the respect of the world...." First Inaugural, April 30, 1789.

We have seen in our early history, a glorious heritage in America's Christian Constitutional Republic. Generations of her citizens lived in individual liberty which was the envy of the world. Now liberty, civil and religious, is in peril. Generations of our children have been indoctrinated in socialism and the glorious past has been masked from their view. Branches of government are no longer in balance, through overreach and abuse. How can we reclaim the legacy for our children, grand-children, and those to come? What about the children who live next door? Are they not worthy of their rightful heritage?

How do we reclaim the legacy of liberty that brought such blessings to America? We suggest that individuals study, America's Providential History, in order to know His Story, our true History. The story begins with Creation and the Dominion Mandate, when God instructed Adam on self- government and the rule of His law. The story of how God deals with His Creation, with men and nations, is a focus of many Christian evangelical ministries, as you know. We suggest that you begin with the Webster's 1828 Dictionary, which restores the language of Liberty and makes your study of America's past much more meaningful. The books recommended on America's Christian History are scholarly, yet readable for all ages, and have all meant a great deal in my own life and ministry. Constitutional Liberty is dependent on the Family, on the Home, the Church and the Government. Each has its essential part. Character is formed in the family life. Christian self-government must be taught and practiced at home. The breakdown of the family in America presents a crisis in the culture. In a home where there is Biblical order, a father and mother, and children, you have the first level of government. Training begins religiously, educationally, and even politically.

It is in the Christian home, where America's heritage of Christian character must be formed, and great emphasis must be placed on Conscience. In true Christianity, conscience is considered "the most sacred of all property."

A study of the colonial charters and state constitutions display the same dedication to a Christian nation. No one can read the State Constitutions without observing the same Christian nature in those documents as in the Constitution. However, can just laws be carried out without just and honorable men in office? In my home state of North Carolina, the State Constitution required that "no person who shall deny the being of God, or the truth of the Christian religion, or the divine authority of the Old or New Testaments, or shall hold religious principles incompatible with the freedom and safety of this state, shall be capable of holding any office, or place of trust, or profit in the civil department, within this State."

The Massachusetts State Constitution, penned by Samuel Adams and John Adams, stated, "All persons elected must make and subscribe to the following declaration: viz [that is to say], I do declare that I believe the Christian religion and have firm persuasion of the Truth."

Where to begin to reclaim the legacy? Consider a new study for family devotions. Or perhaps, a life changing self-study, or organizing a small weekly group study; this would be a new challenge with great benefits for anyone. Would not any Christian desire to be a Patriot today?

Is true Patriotism even possible without the knowledge of His story in all of its Glory? 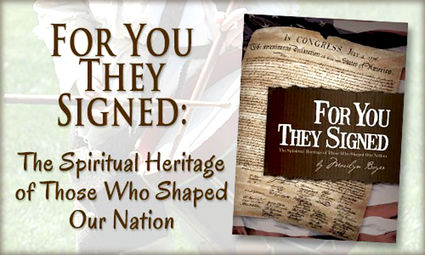 Having taught America's Christian History for more than forty years, we have been deeply indebted to the late Verna Hall and Rosalie Slater, who taught and mentored our teachers. Their pioneer work is carried on at the Foundation for American Christian Education, in Chesapeake, Va. The history books are in print, and can be found on their website: www.FACE.net. Dr. Carol Adams directs the research and teaching ministry at the Hall-Slater Library in Chesapeake. The 1828 Dictionary is also available through www.FACE.net. The recommended America's Providential History, can be found through the Providence Foundation, in Charlottesville, VA.

Feel free to inquire about other resources from this writer.

"For You They Signed"