For obvious reasons, this will be my last War Between the States sesquicentennial column given Gen. Robert E. Lee's surrender at Appomattox. The only one penned with greater despair was four years ago on First Blood and Treason in Baltimore.

Massachusetts troops shown themselves eager to assemble in the sovereign State of Maryland (still in the voluntary Union at the time) uninvited by the Governor and/or Legislature of that State to kill and wound persons of Maryland. This made painfully clear willingness to militarily establish federal hegemony over our once sovereign States to accomplish desired corporate welfare when political efforts to accomplish their wealth transfers fail. The stage was once again set for misuse of power to sow great death and destruction many of their ancestors observed and/or tried to escape in Europe. Cooler heads prevailed when the stage was set following the "Tariff of Abominations" to back off the brink of war between States wanting competition and independence on one side and those wanting empire and mercantilism's redistribution from productive peoples on the other side. The newly formed Republican Party would not exhibit nor allow this same wisdom shown three decades prior. Without a 'force bill' granted to the executive by congress in early 1861 and no courage to impeach Lincoln for treason (doing what corporate welfare recipients wanted) it would only be a matter of which peoples would lose more as is true with all war of this sort to enrich the few greedy redistributionists.

Some wonder if Gen. Lee held any regrets in retrospect with his well contemplated decisions. He simply could not commit (Art. 3, Sec. 3) treason and remain with the federal army he held so dear to engage in war with other sovereign States. At the end of the war it is clear if Lee had been willing to engage in treason (as other officers of Virginia who chose to participate in the treason with federal armies) he wouldn't have lost Arlington he held so dear. Even more profound Lee could enumerate the many he held in great admiration, love and affection lost in those four horrific years of death and destruction yet still affirmed: "We could have pursued no other course without dishonor. And sad as the results have been, if it had all to be done again, we should be compelled to act in precisely the same manner." -- Robert E. Lee

This quote is more directed at Lee's inability to dishonour/violate his oath to the Constitution. One may argue the 1860s/modern spirit of Massachusetts (morphing into the command/mercantilist economy they loathed and successfully fought against with great Spirit in the 1770s) further 'progressing' us into the soviet-style hegemonic result we observe today would only serve to strengthen Lee's resolve in lack of regret. His words to F.W. Stockdale (former Texas governor) on the matter are as follows:

"Governor, if I had foreseen the use these people desired to make of their victory, there would have been no surrender at Appomattox, no, sir, not by me. Had I seen these results of subjugation, I would have preferred to die at Appomattox with my brave men, my sword in this right hand." -- Robert E. Lee

I don't think it a stretch to accuse Gen. Lee of naively thinking the best in others - esp. expecting governments to be more civil in times of peace following the war. Knowing attempts to take his property via the tax code and use Arlington to bury those who destroyed Virginia during the war, it is hard to imagine a man of his intellect couldn't forecast what was to follow under federal hegemony. Some argue after witnessing the result of federals in Fredericksburg, Gen. Jackson more clearly understood what was at stake and the Republican Party was very serious about achieving their corporate welfare militarily when not won politically. Others were more prophetic and sanguine in their words forecasting what would follow, Gen. Patrick Cleburne (oft called "Stonewall of the West") is quoted as follows:

"Every man should endeavor to understand the meaning of subjugation before it is too late... It means the history of this heroic struggle will be written by the enemy; that our youth will be trained by Northern schoolteachers; will learn from Northern school books their version of the war; will be impressed by the influences of history and education to regard our gallant dead as traitors, and our maimed veterans as fit objects for derision... It is said slavery is all we are fighting for, and if we give it up we give up all. Even if this were true, which we deny, slavery is not all our enemies are fighting for. It is merely the pretense to establish sectional superiority and a more centralized form of government, and to deprive us of our rights and liberties." – Patrick Cleburne

Cleburne was one of eleven generals killed in Hood's poorly executed Battle of Franklin November 1864. The fall of Atlanta a few months prior made certain Lincoln would be re-elected and the Republicans would continue their bloody carnage for another four years, sealing the fate of independence for our once sovereign States. As Pres. Lincoln made it clear he would not negotiate a settlement for peace (most noted the early February 1865 meetings) those like Cleburne who soldered on were doing little more than what Gen. Lee lamented not doing in his retrospective quote above - i.e., preferring to die sword in hand.

Mission accomplished... Gazette readers require little instruction how prophetic these words have been. It didn't take long for Lincoln's first militarily imposed corporate welfare to become the 'too big to fail' mentality of today; Lincoln's first income tax (abolished when southern states returned to the redefined forced coalition) to now be considered normal; Lincoln's first federal fiat currency painfully brought back into check only to become accepted a few decades later and entrenched in our economy with the Federal Reserve; Lincoln's unconstitutional federal gun laws now accepted as indispensible, first federal conscription acts now deemed acceptable when wars are not supported enough by voluntary soldiers, etc. It took a little longer for UN Agenda 21 standards and Massachusetts (O'Romney care) health policy to be embraced by the ill-educated, mainstream extremists, but Common Core (also originating in Mass.) is what rings loudest from Gen. Cleburne's words above.

I grow increasingly weary of those who say Mr. Lincoln had good intentions; he didn't want US to become what it is today just as those who say the USSR failed because they didn't do it right in following Mr. Marx. Furthermore we were supposed to be better after our hard fought and won independence - many who left Europe to escape the morass of empire building and over centralisation cycles of death and destruction.

Those around the globe looked to us as a promising hope of the new world of freedom and independence over hegemony. Sadly we squandered it to set the world on the biggest modern soviet movement not seen since the despotic days of Pax Romana.

Morphed into yet another forced coalition of states increasingly less constrained by the letter and Spirit of our Constitution, we'd tip the balance in Europe to determine the most powerful to put geopolitical units under their hegemony instead of promoting freedom and independence. One of the more astute in this regard at that time was English philosopher Lord Acton, revealed in his 1866 correspondence to Robert E. Lee not long after the surrender at Appomattox:

"I saw in State Rights the only availing check upon the absolutism of the sovereign will, and secession filled me with hope, not as the destruction but as the redemption of Democracy. The institutions of your Republic have not exercised on the old world the salutary and liberating influence which ought to have belonged to them, by reason of those defects and abuses of principle which the Confederate Constitution was expressly and wisely calculated to remedy. I believed that the example of that great Reform would have blessed all the races of mankind by establishing true freedom purged of the native dangers and disorders of Republics. Therefore I deemed that you were fighting the battles of our liberty, our progress, and our civilization; and I mourn for the stake which was lost at Richmond more deeply than I rejoice over that which was saved at Waterloo." -- Lord John Dahlberg Acton 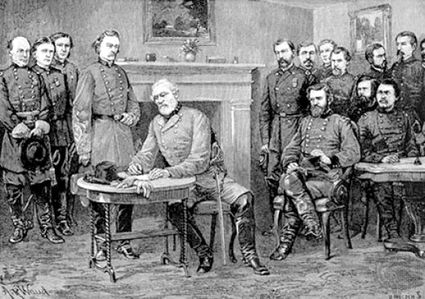 In closing, I'd like to address Gen. Cleburne's words on mere 'pretense' to cloak the true purpose of hegemony. Mr. Lincoln is the greatest politician this nation has ever produced largely because his exceptional ability to use pretense in this manner. His successful Republican playbook is now used every bit as effectively by modern Democrats to empower the federal leviathan slowly destroying us. It has long been written the first casualty of war is truth; sadly the last casualty of our war between the states came some years after Appomattox when we lost the ability to see through this pretense along with the will to fight this hegemony. Inability to keep tyranny from leviathans of this sort in check exacerbates the result of death and destruction if history is any guide... Deo Vindice