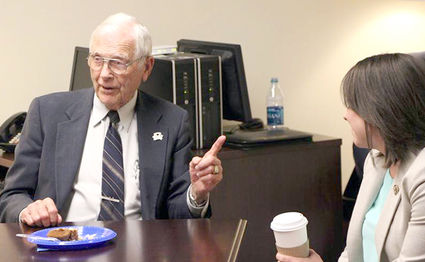 WASHINGTON, D.C. – Montgomery's "Fighter Ace," Lt. Gen. Charles "Chick" Cleveland met with U.S. Representative Martha Roby (R-AL) and her staff on Wednesday, May 20. Gen. Cleveland and his fellow "Fighter Aces" were later honored with the Congressional Gold Medal in a special ceremony in the U.S. Capitol.

"It was such an honor to have Gen. Cleveland in my office this morning. He was kind enough to spend some time with my staff and me, sharing stories about his service, including what it's like to shoot down a MIG fighter jet. Later today, Gen. Cleveland and his fellow 'Fighter Aces' will be bestowed the Congressional Gold Medal for their extraordinary acts of bravery on behalf of our country. The ceremony starts at 2:00 p.m. Central Time, and I encourage everyone back home to watch."

The ceremony honoring all of America's "Fighter Aces" with the Congressional Gold Medal took place at 2 p.m. Central Time inside Emancipation Hall. The event was televised on C-SPAN and streamed live online by the Speaker's office at www.speaker.gov/live.

America's "Fighter Aces," are the country's most distinguished fighter pilots, having earned the title, "Ace," by downing at least five enemy aircraft in combat. Gen. Cleveland earned his "Ace" status as a pilot in the Korean War, in which he shot down five enemy aircraft in the dangerous region known as "MIG Alley."

After Korea, Gen. Cleveland went on to a distinguished and decorated career as an aviator and combat instructor, finally serving as commander of Air University at Maxwell Air Force Base from 1980-1984. Retiring to Montgomery, Gen. Cleveland has remained active in Air Force affairs, both nationally and locally at Maxwell.

Now 87, Gen. Cleveland serves as president of the American Fighter Aces Association and has worked to gather all the living "Fighter Aces" for Wednesday's Congressional Gold Medal Ceremony. Of the 77 "Aces" still living, more than 35 are expected to attend Wednesday's ceremony, including Gen. Cleveland.

The Congressional Gold Medal is Congress' highest honor, awarded to Americans who have made special contributions to the country. Legislation securing the Gold Medal for the "Fighter Aces," was passed in May 2014.

Roby hosted “Coffee & Conversation with Special Guest Congressman Trey Gowdy” on Thursday, May 28 at 10:30 a.m. Central Time at the Millbrook Civic Center behind Village Green Park. The event was a chance for people from the River Region to meet with Roby and Gowdy, and join a discussion about conservative reform and the need for strong Congressional oversight.

The event was free and open to the public.