The Declaration and Magna Charta 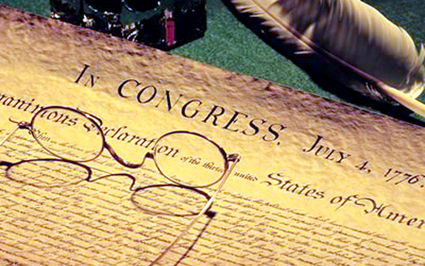 July 4, 1776 was the culmination of a process of time that brought ancient ideas of liberty to the highest expression in history. The story of liberty in the Western world began centuries earlier, however. The ideas in the Declaration were not new as Thomas Jefferson told us. He had heard these ideas from the pulpit and they had been articulated decades before that. Many of these same ideas of liberty were recovered in 1215 in the document known as Magna Charta. Their origin began in the gospel of Christ, were embraced by the Celts, then by the Saxons, and articulated as the Common Law of England from the law book of King Alfred by 890. The Declaration does have quite a legacy!

The 800th Anniversary of Magna Charta – 1215 to 2015 – has had little recognition across America. Scarcely anyone has taken notice, and as parades are conducted and then fireworks are launched on the evening of July 4, those who truly understand the ideas of liberty being celebrated will be few and far between. Those who should appreciate the roots of the Declaration ought to be those who claim Christianity as their professed faith. The shallow nature of today's Christian faith in America attests to its lack of true influence in our society. Certainly any document that turns 800, and has influenced the development of liberty in Western Civilization, ought to be recognized for its depth of meaning.

So how are the two documents – Magna Charta and the Declaration of Independence, similar? First, both are a list of grievances against lawless kings. King John at the time of Magna Charta lacked even the basic aspects of self-control. An undisciplined individual who acted like a child when he did not get his way, he flew into a rage after signing the document. He violated the "common law," unwritten but inherited from Saxon England, by exercising arbitrary power, interfering with inheritance laws, rights of widows, debtors, lenders, businessmen and military service. He also violated the due process of law. As an example, chapter 39 states "no free man shall be seized or imprisoned, or stripped of his rights or possessions...except by the lawful judgment of his equals or by the law of the land." The Declaration also lists grievances – nearly two thirds of the document, against King George III. He was a man with little self-control and many thought him insane (power corrupts). He violated individual rights and the written law, including due process. As the Declaration states, King George III has deprived "us in many cases, of the benefits of trial by jury."

Second, both are documents of interposition. In other words, they lawfully resist tyranny by asserting the biblical lower magistrate principle of having those in a lower office hold those in a higher office to the rule of law. In the case of Magna Charta, the Barons, who already held power, resisted lawfully the tyranny of King John. In the case of the Declaration, the Continental Congress is the body that asserted that King George III was acting like a tyrant. This is not lawless revolution, but lawful interposition.

Third, both are written as lawful justifications for civil war. The Barons (nobleman in charge of defending the king) had taken up arms against the King. They were armed to insure obedience to the law. The Declaration was written after King George III severed the relationship of the Crown to the Colonies. The Colonies had no option left but self-defense. The Continental Congress armed the militias. They did not arm themselves on their own authority for the American Revolution was conducted as lawful resistance.

Fourth, they both articulate a defense of liberty under God. The Magna Charta begins "Know that before God, for the health of our soul and those of our ancestors, to the honor of God." The Declaration ends "with a firm reliance on the protection of Divine Providence."

The parallels are amazing in one sense, separated by 550 years, but united in their resistance to the lawless Kings of their times and asserting the rights of the people through the lower magistrate. However, there are key distinctions between the two as well, affirming the fact that the Congress that met in Philadelphia had the advantage of both 550 years as well as the freedom to base America's government more squarely on the original foundation of English Liberty – the Ten Commandments.

Magna Charta asserted "no scutage (tax) or aid may be levied in our kingdom without its general consent" which was the foundation for the phrase "no taxation without representation" during the time of the American Revolution. Magna Charta was a stop sign for lawless kings, but it rested on the mentality that rights were given from the Crown. The Declaration, on the other hand, stated "that all men are created equal, that they are endowed by their Creator, with certain unalienable rights... that to secure these rights, governments are instituted among men, deriving their just power from the consent of the governed."

So what can we learn from these similarities and distinctions? God has given us a line of liberty from the days of the Bible to the birth of our nation. It rests on the Ten Commandments which liberated the ancient Israelites from Egypt's tyranny and extends to the grace of God and the Gospel. May we tell the story to our children and grandchildren - liberty costs something and to preserve it, as the Declaration declares, we must pledge "our lives, our fortunes, and our sacred honor!"