The consequences of the 'Ferguson effect' are already appearing. The main victims of growing violence will be the inner-city poor. 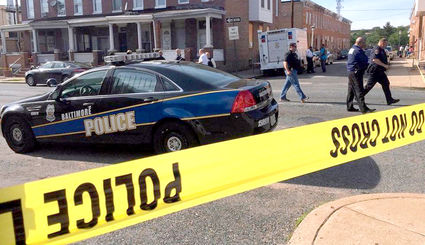 A police investigation under way in Baltimore, May 20, 2015

The nation's two-decades-long crime decline may be over. Gun violence in particular is spiraling upward in cities across America. In Baltimore, the most pressing question every morning is how many people were shot the previous night. Gun violence is up more than 60% compared with this time last year, according to Baltimore police, with 32 shootings over Memorial Day weekend. May has been the most violent month the city has seen in 15 years.

In Milwaukee, homicides were up 180% by May 17 over the same period the previous year. Through April, shootings in St. Louis were up 39%, robberies 43%, and homicides 25%. "Crime is the worst I've ever seen it," said St. Louis Alderman Joe Vacarro at a May 7 City Hall hearing.

Murders in Atlanta were up 32% as of mid-May. Shootings in Chicago had increased 24% and homicides 17%. Shootings and other violent felonies in Los Angeles had spiked by 25%; in New York, murder was up nearly 13%, and gun violence 7%.

Those citywide statistics from law-enforcement officials mask even more startling neighborhood-level increases. Shooting incidents are up 500% in an East Harlem precinct compared with last year; in a South Central Los Angeles police division, shooting victims are up 100%.

By contrast, the first six months of 2014 continued a 20-year pattern of growing public safety. Violent crime in the first half of last year dropped 4.6% nationally and property crime was down 7.5%. Though comparable national figures for the first half of 2015 won't be available for another year, the January through June 2014 crime decline is unlikely to be repeated.

The most plausible explanation of the current surge in lawlessness is the intense agitation against American police departments over the past nine months.

Since last summer, the airwaves have been dominated by suggestions that the police are the biggest threat facing young black males today. A handful of highly publicized deaths of unarmed black men, often following a resisted arrest-including Eric Garner in Staten Island, N.Y., in July 2014, Michael Brown in Ferguson, Mo., in August 2014 and Freddie Gray in Baltimore last month-have led to riots, violent protests and attacks on the police. Murders of officers jumped 89% in 2014, to 51 from 27.

President Obama and Attorney General Eric Holder, before he stepped down last month, embraced the conceit that law enforcement in black communities is infected by bias. The news media pump out a seemingly constant stream of stories about alleged police mistreatment of blacks, with the reports often buttressed by cellphone videos that rarely capture the behavior that caused an officer to use force.

Almost any police shooting of a black person, no matter how threatening the behavior that provoked the shooting, now provokes angry protests, like those that followed the death of Vonderrit Myers in St. Louis last October. The 18-year-old Myers, awaiting trial on gun and resisting-arrest charges, had fired three shots at an officer at close range. Arrests in black communities are even more fraught than usual, with hostile, jeering crowds pressing in on officers and spreading lies about the encounter.

Acquittals of police officers for the use of deadly force against black suspects are now automatically presented as a miscarriage of justice. Proposals aimed at producing more cop convictions abound, but New York state seems especially enthusiastic about the idea.

The state's attorney general, Eric Schneiderman, wants to create a special state prosecutor dedicated solely to prosecuting cops who use lethal force. New York Gov. Andrew Cuomo would appoint an independent monitor whenever a grand jury fails to indict an officer for homicide and there are "doubts" about the fairness of the proceeding (read: in every instance of a non-indictment); the governor could then turn over the case to a special prosecutor for a second grand jury proceeding.

This incessant drumbeat against the police has resulted in what St. Louis police chief Sam Dotson last November called the "Ferguson effect." Cops are disengaging from discretionary enforcement activity and the "criminal element is feeling empowered," Mr. Dotson reported. Arrests in St. Louis city and county by that point had dropped a third since the shooting of Michael Brown in August. Not surprisingly, homicides in the city surged 47% by early November and robberies in the county were up 82%.

Similar "Ferguson effects" are happening across the country as officers scale back on proactive policing under the onslaught of anti-cop rhetoric. Arrests in Baltimore were down 56% in May compared with 2014.

"Any cop who uses his gun now has to worry about being indicted and losing his job and family," a New York City officer tells me. "Everything has the potential to be recorded. A lot of cops feel that the climate for the next couple of years is going to be nonstop protests."

Police officers now second-guess themselves about the use of force. "Officers are trying to invent techniques on the spot for taking down resistant suspects that don't look as bad as the techniques taught in the academy," says Jim Dudley, who recently retired as deputy police chief in San Francisco. Officers complain that civilians don't understand how hard it is to control someone resisting arrest.

A New York City cop tells me that he was amazed to hear people scoffing that Ferguson police officer Darren Wilson, who killed Michael Brown, only looked a "little red" after Brown assaulted him and tried to grab his weapon: "Does an officer need to be unconscious before he can use force? If someone is willing to fight you, he's also willing to take your gun and shoot you. You can't lose a fight with a guy who has already put his hands on you because if you do, you will likely end up dead."

Milwaukee Police Chief Edward A. Flynn, discussing hostility toward the police, told me in an interview on Friday: "I've never seen anything like it. I'm guessing it will take five years to recover."

Even if officer morale were to miraculously rebound, policies are being put into place that will make it harder to keep crime down in the future. Those initiatives reflect the belief that any criminal-justice action that has a disparate impact on blacks is racially motivated.

In New York, pedestrian stops-when the police question and sometimes frisk individuals engaged in suspicious behavior-have dropped nearly 95% from their 2011 high, thanks to litigation charging that the NYPD's stop, question and frisk practices were racially biased. A judge agreed, and New York Mayor Bill de Blasio, upon taking office last year, did too, embracing the resulting judicial monitoring of the police department. It is no surprise that shootings are up in the city.

Politicians and activists in New York and other cities have now taken aim at "broken windows" policing. This police strategy has shown remarkable success over the past two decades by targeting low-level public-order offenses, reducing the air of lawlessness in rough neighborhoods and getting criminals off the streets before they commit bigger crimes. Opponents of broken-windows policing somehow fail to notice that law-abiding residents of poor communities are among the strongest advocates for enforcing laws against public drinking, trespassing, drug sales and drug use, among other public-order laws.

As attorney general, Eric Holder pressed the cause of ending "mass incarceration" on racial grounds; elected officials across the political spectrum have jumped on board. A 2014 California voter initiative has retroactively downgraded a range of property and drug felonies to misdemeanors, including forcible theft of guns, purses and laptops. More than 3,000 felons have already been released from California prisons, according to the Association of Deputy District Attorneys in Los Angeles County. Burglary, larceny and car theft have surged in the county, the association reports.

"There are no real consequences for committing property crimes anymore," Los Angeles Police Lt. Armando Munoz told Downtown News earlier this month, "and the criminals know this." The Milwaukee district attorney, John Chisholm, is diverting many property and drug criminals to rehabilitation programs to reduce the number of blacks in Wisconsin prisons; critics see the rise in Milwaukee crime as one result.

If these decriminalization and deincarceration policies backfire, the people most harmed will be their supposed beneficiaries: blacks, since they are disproportionately victimized by crime. The black death-by-homicide rate is six times higher than that of whites and Hispanics combined. The killers of those black homicide victims are overwhelmingly other black civilians, not the police. The police could end all use of lethal force tomorrow and it would have at most a negligible impact on the black death rate. In any case, the strongest predictor of whether a police officer uses force is whether a suspect resists arrest, not the suspect's race.

Contrary to the claims of the "black lives matter" movement, no government policy in the past quarter century has done more for urban reclamation than proactive policing. Data-driven enforcement, in conjunction with stricter penalties for criminals and "broken windows" policing, has saved thousands of black lives, brought lawful commerce and jobs to once drug-infested neighborhoods and allowed millions to go about their daily lives without fear.

To be sure, police officers need to treat everyone they encounter with courtesy and respect. Any fatal police shooting of an innocent person is a horrifying tragedy that police training must work incessantly to prevent. But unless the demonization of law enforcement ends, the liberating gains in urban safety over the past 20 years will be lost.

Ms. Mac Donald is the Thomas W. Smith fellow at the Manhattan Institute and the author of "Are Cops Racist?" (Ivan R. Dee, 2002).

At the entrance to the New York Public Library is a great quote from Plato that should guide all lives:

"BUT ABOVE ALL THINGS TRUTH BEARETH AWAY THE VICTORY"!