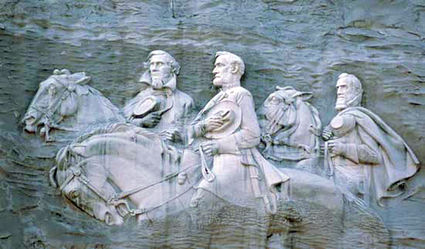 Those who love Your law have great peace and nothing offends them. Psalm 119:165

Okay, this is not going to be a religious rant of any kind because I fully understand a large percentage of people out there reading this may not be believers. That is okay. It is what it is. At the same time, however, there comes a time when all people, regardless of their beliefs need to take a step back and get off of this ridiculous notion that everything "offends" them. In fact, most of the time we need to tell those who claim to be offended to simply shut up and move on since most of the time, I could really care less if something "offends" you. Truth is, in today's world, no matter what someone says, there is at least one nut job out there who is going to claim to be offended. Guess what? Remember, offense is a choice you make and chances are that I DO NOT CARE. Let's go.

1. The Confederate Flag. Okay, I will give most folks some latitude and agree that the flag probably should not be flying over any state capitol building. I will give you that. By flying the flag over a state capitol, beneath the American flag, exactly what are you saying? Take it down if you must. But for me, it stops there. I understand how many people view the flag and personally, if you wave it in my face, we are probably going to have a problem because it is now being used as a tactic to illicit some response. Its historical meaning has now been corrupted to serve the needs of some group. But in its true historical context, leave it the heck alone.

As with almost any cause that idiot people get behind, the true reason gets buried beneath several layers of subterranean B.S. that has nothing to do the original cause. Once that proverbial can of worms has been opened and out they come, good luck getting them back in. Have you ever heard the expression, give an inch and take a foot? That is what we have here. Over the past couple of weeks, I have seen insanity put into high speed cruise control regarding not just the Confederate battle flag but southern culture as a whole. Just last week, the Atlanta chapter of the NAACP has called for the sandblasting (i.e. destruction) of Stone Mountain in Georgia. For those of you who do not know what this is, it is the world's largest relief sculpture depicting Generals Lee and Jackson along with Jefferson Davis. The Atlanta chapter opined, "It is time for Georgia and other Southern states to end the glorification of slavery and white supremacy paid for and maintained with the taxes of all its citizens. The NAACP Atlanta chapter is calling for the immediate removal of all Confederate Memorial Monuments maintained by the state of Georgia using taxpayer money." (http://politics.blog.ajc.com/2015/07/14/sandblasting-the-confederate-faces-off-stone-mountain-yeah-right/)

Yeah, once you give an inch, expect the worse. The national monument at Fort Sumter has acquiesced to the crazies and removed all their Confederate flags. (http://www.washingtonpost.com/news/powerpost/wp/2015/07/10/the-confederate-flag-is-also-down-at-fort-sumter-national-park-gift-shops). There is a new Confederate flag challenge where people are going onto private property and stealing flags. (Which by the way IS going to get somebody killed). We also see Memphis unanimously voting to exhume Nathan Bedford Forrest's body (http://www.breitbart.com/big-government/2015/07/11/memphis-city-council-votes-to-dig-up-grave-of-confederate-general-sell-his-statue/) It is a world gone mad. Does this quote mean anything to anybody? "Those who fail to learn from history are doomed to repeat it?" Look folks, I am a black guy for crying out loud and clearly have no love for most of the ideals that fought behind that banner but I love history and respect all aspects of history. We cannot afford to ignore our past and expect to move forward into the future. It has been tried before and failed each time. Perhaps this is what the mindless leftist really want. It used to drive me nuts when I was in Germany and I would go into a museum and look at a Focke-Wulf or Messerschmitt fighter and notice that the airplanes would not have the Swastika on the tail. Really? It is history. "But Rob, if we have that image. . . ." Shut up. What is better, to ignore it or let it generate discussion and explain what it really represented? Madness.

2. The American Flag challenge – Really? There is a young lady (term used very loosely), Sierra McGrone, who has actually been challenging people to, uh, um, how do I say this? Hmmm, okay, uh, go to the bathroom and then use the American flag to let us say, clean themselves. I cannot say enough here. Go to YouTube or online and just watch her video rant. You can see some fairly rude photographs of her and at least one guy taking the challenge. BTW, on 5 July a young man burned a gay pride flag and was arrested. I am not going to argue whether he should have been or not but if he was clearly involved in a hate crime for "desecrating" that flag, what about the peeps who do the same to the American flag?

3. Dukes of Hazard – Really? TV Land decided enough is enough and had to rid the airwaves of this vile and reprehensible television show. Hey, as a kid, I could not wait to see Daisy Duke in those super short-shorts every Friday night. But to have that, that, that flag on top of their car called the General Lee. Really? Let me give you a challenge. Turn on TV Land and watch 20 episodes of "The Jefferson's" and count the number of times you hear the word "honky." But that's not racist! Yeah, right. Killing a repressive television show like the Dukes of Hazard I am sure will make me a much better pilot. Sheesh!!

4. WWII Nose Art – By now, most of you who read my column know that I am fascinated with WWII aviation history. In particular, my interests are the German Luftwaffe in North Africa from April 1941- September 1942, German ace Hans Marseille and finally the combined bomber offensive (CBO) against Germany. Well, as part of the CBO, my favorite airplane is the Boeing B-17. And part of the B-17 history is the interesting nose art that adorned the noses of almost every B-17 in the European theater. Many of these pictures, as you can imagine were of mostly or partially nude women. Oh my. You mean to tell me that young men, trained to kill other human beings and realizing that their own mortality was just one German fighter or anti-aircraft shell away, actually had the nerve to paint naked women on their airplanes? Uh, heck yeah. Well, as part of the DoD's ever increasing efforts to stifle history and push its politically correct agenda, the Air Force has decided that these nose art images are offensive and can cause irreparable harm to anyone seeing them. A C-17 pilot who I flew with last week told me that all of these images have been removed from squadrons. Even if the same squadron flew missions in WWII and images of their aircraft were displayed, they were now determined to be unsuitable. Unit heraldry means nothing these days. In effect the Air Force has said that these young men who fought and died in the skies over Europe were somehow some kind of sexual deviants and their sacrifices for this country must be repressed for the greater politically correct good. I am vomiting right now. Remember when the Smithsonian was going to pull the Enola Gay exhibit because the plane that dropped the atomic bomb on Hiroshima might offend some viewers? Thank goodness they came to their senses and rightfully displayed the aircraft as a significant piece of American history. Too bad that it appears the Air Force has become lost in their own stupidity. No historical nose art allowed but hanging a gay pride flag from your house on base (http://www.military.com/daily-news/2015/02/06/veteran-protests-davis-monthan-home-flying-gay-friendly-flag.html) is welcomed with open arms.

All I know is that we in this country are seemingly headed down the slippery slope of political correctness and are almost to the point of no return. As a whole we are too easily offended and usually for no reason. People, I believe, want to be offended so they can better effect whatever societal change they want. On the other side of the fence, I believe one reason so many people are resistant to such change is that we recognize once one little variation is put into effect, too often we find ourselves fighting larger, more intrusive and invasive vagaries fully recognizing that at some point, it becomes impossible to "re-can" those pesky little worms.