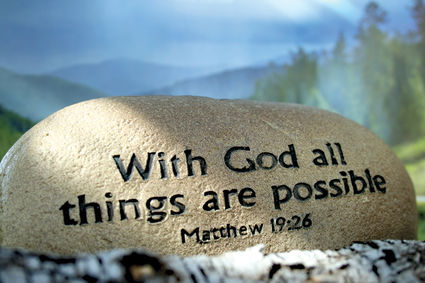 One of the great challenges as a Pastor is to help people walk through the unexpected difficulties of life, particularly with reference to their faith. It is often in those times we discover the real meaning of our faith. Whether it is the illness of children, the accidents of life, the unexpected deaths, the reversals of health, the challenges of a changing economy or the potential of losing a job because of Christian convictions, trusting Jesus is not as easy as it might seem.

In fact, if this subject intrigues you, this might be a good time to ask yourself, "Have I ever been disappointed in God?" I suspect the answer for most of us is "yes," even if we are reluctant to admit it. That does not mean we have rejected our faith or denied the power of God. Rather, it reflects our human nature and the fact that all of us have a ways to go in maturity. I would suggest to you that it is healthy to be honest about our apprehensions so long as we allow God to show us His strength for troubled times.

Contrast our understanding of faith with a young girl who is a Christian in a land where Christians are persecuted. She had been able to travel out of the country to a place of refuge. There came a time when she wanted to return to her land and people. She was advised that to return would probably mean her death. Her response was that to stay away when the Holy Spirit encouraged her to be a witness would be to her a denial of her faith. She would rather die for Christ than to live abandoning her faith.

Certainly few if any of us will face such dramatic decisions of faith. However, it seems that in our modern western culture of which boasts of health, wealth and success, we have assumed that all good Christians will do well and be blessed in life. Which gives us a greater sense of security, Jesus or circumstances?

Meanwhile, his cousin Jesus was all the buzz around town. He's in prison, and Jesus is now the one getting all the big crowds. Jesus is the one now who everyone is talking about. Not only was John in prison, he knew what probably was going to happen to him. He knew what happened to people who confronted Herod.

Here John is in prison probably wondering if God had forgotten him. He knew the heritage of his family. He remembered the stories his mother had told him over and over about the angel coming to her and later to Mary. He knew the promise of God on his life. Growing up, that was probably the topic of every family get-together.

No doubt sitting in the prison he remembered the occasion where he was baptizing those repented of their sins when Jesus walked up and asked to be baptized. He could still recall the voice from heaven which said, "This is my beloved Son in whom I am well pleased."

Considering his fate, he was also puzzled by who he was often called. Many people associated John with Elijah the prophet. He was blessed by such a thought, but disturbed on the inside because the way Elijah left this earth and the way he would likely go had no comparison. There wasn't going to be any chariot coming down out of heaven to sweep him off his feet and carry him to glory.

I hope you are getting the picture. He was getting the prison experience, not the chariot ride. While certainly we are not John the Baptist, perhaps we can identify with his feelings. Where was God in the circumstances of life?

How serious do you think the average Christian is in America about following Christ completely? How serious are you?

Perhaps John prayed for God to release him from prison. But God had a different plan. How do we handle it when God has different plans for our lives? I remember some sincere prayers from years ago which now I am so glad God didn't answer the way I would have liked. It takes faith to pray, but greater faith to accept whatever God's answer may be.

Maybe for us the best prayer might be: "God, I trust you. And while I can't see everything that you're doing, while I don't know what you're doing, Father, you're always good. I'm your child. I am the sheep of your pasture. You're the shepherd of my soul. I trust you to guide me in the path of righteousness for your name's sake. But God in the end, even if I have prayed what I thought was right and even if I end up in a prison when I did everything right, God I want you to know I trust you because without you I am nothing and the things I have will soon pass away."

Is there a chance some who read this article are disappointed Christians right now? Have things not worked the way you thought? Does God not seem to answer your prayers the way you asked? Are you and God in a wrestling match over your life right now?

For Christians who struggle with their faith, let me suggest a couple of questions to ask. When you became a Christian, did you make a decision or a commitment? That might seem like a silly question, but there is a world of difference. It's easy to accept facts and appreciate the hope of heaven. It's quite another to follow Christ no matter what happens. Similarly I would ask, are we honoring our heritage with our faith or have we surrendered our hearts. People who have surrendered have no right to complain or make demands.

Perhaps if you are struggling with faith, it is time to revisit your commitment. Talk to your Pastor or a trusted follower of Jesus. Some of the greatest testimonies about joy in faith come from people who have been through the darkest valleys.

Let me close with the story of Matt Emmons. He was one shot away from claiming victory in the 2004 Olympics. Matt was competing in the 50 meter three position rifle event. His final shot merely needed to hit the target to give him the gold medal. But in what was described as an unbelievably rare mistake at that level of competition, he fired at the wrong target. Standing in lane two he fired at the target in lane three. His shot was great, but at the wrong target. Instead of a metal, Matt ended up in eighth place.

That's a picture of what happens to a lot of Christians who become fans of Jesus and expect blessings in return instead of followers of Jesus prepared to be witnesses no matter what life brings. Is the target of your life your own will or magnifying Christ? Which one are you, fan or follower?