Convocation (Latin: calling together) is a group of people formally assembled for a special purpose. It also is a gathering of eagles 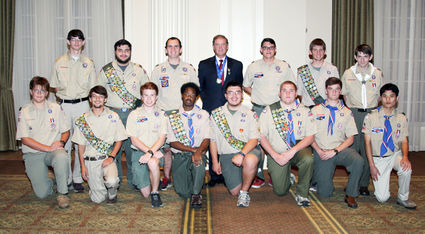 Sam Adams, recipient of the 2015 NESA Outstanding Eagle Award, poses with a group of new Eagle Scouts on September 15th at Trinity Presbyterian Church during the annual Convocation of Eagles for the Tukabatchee Council of the Boy Scouts of America

Animals gather under different and sometimes unusual names. There is the gaggle of geese, or the pride of lions. Many have heard of the herd of elephants or the covey of quail. Not quite so familiar to the reader might be a lounge of lizards or a smack of jellyfish. But what do you call a gathering of Eagles?

The Tukabatchee Council of the Boy Scouts of America held its annual Convocation of Eagles Tuesday, September 15th at Trinity Presbyterian Church. The event recognizes those young men who have achieved Scouting's highest honor.

The Council also awarded Sam Adams the National Eagle Scout Association Outstanding Eagle Scout Award. The local Council's NESA committee selects an Eagle Scout who has demonstrated outstanding achievement at the local state, or regional level. The NOESA recognizes an Eagle Scout whose efforts have made a positive impact close to home. As part of this traditional ceremony, Adams gave the new Eagles the following charge:

It is indeed an honor to be with you tonight as we recognize these young men for their great accomplishments.

I would be remiss if I did not extend my warmest thanks to our God above and to those who helped these young men achieve this high honor. I also applaud the parents and special friends of those here tonight who made the sacrifices necessary in order for these Eagles to roost here this evening.

A personal point of privilege as I recognize my wife, Mary, the love of my life for almost thirty years. Three of our four children were able to be with us tonight. We love them all. They belong to God and we thank Him for sharing them with us.

Thanks also to the selection committee for making this night necessary, and all those who had a hand in putting this program together with a special thanks to Denise and Marvin.

Please indulge me for a few minutes as I share with you my thoughts about these young Eagles being "Living Stones".

The term "Living Stones" is a Biblical reference. I recently heard a sermon about it and I will try to make application to our group gathered here.

Oddly enough, last week my cousin sent me a collection of humorous writings that were found on tombstones to provide a brief contrast.

In New Mexico: Here lies Johnny Yeast. Pardon him for not rising.

In England: Sir John Strange. Here lies an honest lawyer, And that is Strange.

And my personal favorite:

Remember man, as you walk by, As you are now, so once was I. As I am now, so shall you be, Remember this and follow me.

To which someone replied by writing on the tombstone:

To follow you I'll not consent, Until I know which way you went.

But my focus tonight is not on tombstones but on you young men as "living stones".

Stones, in and of themselves, are rarely remarkable absent community. What do I mean by community? Once joined with others they can form great walls, great bridges, and great structures. Here is a brief list of living stones that have gone before us:

Neil Armstrong, the first man on the moon.

The common denominator of all these men; they were all once and always will be, Eagle Scouts. I would contend that these men are not famous for what they have done but who they are. Long before Armstrong stepped on the moon or Cheatham flew his first combat mission, or Speilberg directed ET, they were Eagle Scouts. These living stones are joined by over 2 million other Eagles like them, who have provided a strong and secure structure for our society.

And like any good structure there must be a firm foundation starting with that precious cornerstone. The cornerstone for Boy Scouts can be found in it's four guiding principles, The Scout Oath, the Scout Law, the Scout Motto and the Scout Slogan. But unlike so many other scouts, an Eagle does not simply memorize the words, he adopts these principles, he grafts them into his soul, the words course through his veins as sure as life itself.

The oath is a sacred pledge. While some in our society consider honor as nothing more valuable than a discarded pair of shoes, the Eagle Scout rests his entire being with the simple phrase: On my honor i will do my best to do my duty to God and my country. Of the 64 Eagles in this class a dozen or so have chosen to serve their country by going to one of the military academies or going on active duty or serving in the National Guard. Some Eagles have paid the ultimate price for such a duty. I am reminded of a little known but great American, Lance Corporal Darwin Judge, Eagle Scout . He was one of the two last ground combat soldiers to die in Vietnam on the last day of the War on April 29, 1975 defending the US Embassy in Saigon. Many other Eagles have paid that same price in Iraq, Afghanistan and all around the world.

Nine Eagle Scouts have received the Congressional Medal of Honor, our country's highest honor, that can be bestowed for military service.

You gentlemen, too, have done your duty to your country by serving your community with such exemplary projects as the ones that have been displayed here tonight. They could not have been accomplished but for you striving to uphold and exhibit the 12 tenants of the Scout Law :

Trustworthy, loyal, helpful, friendly, courteous, kind, obedient, cheerful, thrifty, brave, clean, and reverent. While most laws are couched in the terms do and don't, these points are who you are. These standards are high and they are meant to be, for striving for these ideals and keeping the faith with them is what scouting is all about.

And as you know to achieve these points, it takes practice, it takes perseverance, and you must always exercise the Scout Motto, be prepared. Dr. Michael Chambers , CEO of Swift Biotech, headquartered in Mobile, is District Governor for our Rotary organization (motto:Service Above Self). He illustrates the Scout motto in a similar way by discussing its essential element, planning. I would like to borrow his story. A professor at an Ivy League school some years ago met with the graduating seniors in a large auditorium. For statistical simplicity let's say that there we're one hundred graduates. The professor posed the following question,

"How many of you have a plan for your life over the next 10 years and have written it down in order to hold yourself accountable?" Only three hands were raised. Next the professor asked how many in the audience had made any plans for their future but had not put pen to paper. This time a dozen hands went up. The remaining 85% just wanted to graduate and get out as fast as they could, get a job and move on.

The professor did a follow-up questionnaire 10 years later and came up with some interesting information. Those dozen individuals who had a plan but failed to write it down actually made twice as much money on average as the other 85% of students in the class. But the 3% who did make a plan and wrote it down, and committed to it, on average earned 10 times as much as the remaining 85%. The moral of this story is not about making money but how being prepared will keep you in a state of readiness in mind and body that will far exceed your expectations.

If you don't hear anything else I say tonight, please hear this: Go home tonight, within the next 7-10 days, make a plan for your life for the next ten years and write it down. Establish your goals, establish your timeline. Don't be afraid to think too big and don't be afraid to fail. A Chinese proverb states that a great man falls down seven times and rises eight. Your plan will become a part of you like the sweetest melody you know.

Put your written plan in something secure, a shoe box, a time capsule a safety deposit box. Come see me in ten years and tell me how it worked out.

Finally, a question. What was your good deed for the day?

An Eagle seeks the opportunity to serve. He perceives and executes solutions before most people recognize the problem. It may be the proverbial walking the little old lady across the street or helping a friend with homework or applying first aid to a bee sting or teaching a Tenderfoot how to start and extinguish a campfire or feeding the homeless at the Salvation Army on Christmas Day. The reward is not fame or fortune; it is that a young man experiences an exhilarating sense of joy knowing he had exercised his knowledge of scouting to help someone in need.

But there is deeper meaning to the Scout Slogan. A couple of years ago a young man named Christopher Alvelo , age 17, from Philadelphia, was a passenger in a car returning home with two friends and his stepfather after completing his Eagle Scout project. Chris' step dad passed out behind the wheel due to a medical condition. The car sped directly toward a large fuel tanker truck. With no regard for his own safety, he instantly unbuckled his seat belt and reached over to steer the car clear of the tanker only to crash into a wall head on just feet away from the fuel truck.

His selfless act saved the lives of everyone in the car and the truck driver. Chris died at the scene. He was awarded his Eagle posthumously.

I share this story with you because if you remember, I mentioned earlier, there is a precious cornerstone that binds all the living stones together. Some might think that the word precious means valuable or beautiful. I would suggest to you that it instead means sacrificial. For you see the cornerstone that embodies the Scout Oath, Law, Motto and Slogan necessarily requires us to put others before ourselves. It may not be natural for the world to think that way but for an Eagle Scout it is as instinctive as breathing.

In conclusion, I urge everyone here in attendance to become a living stone. Follow these Eagles using the foundation you helped them learn, and practice and be. As these living stones skip across the lake of life and reach their final destination, may their ripples be a resounding wave of good for man and mankind.

Click on the pdf at top right and go to page 9B for a list of Scouts.