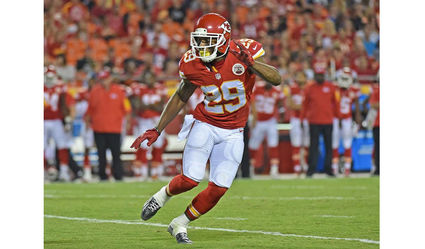 Eric Berry returns to the Kansas City Chiefs after his bout with cancer.

In sports, there are always times when a player can get sidelined by a situation that they can not control, like an injury. There are also times when players get sidelined for reasons beyond sports. That is what happened to star Kansas City Chiefs Safety and former Tennessee star, Eric Berry. His NFL career was almost ended prematurely. After suffering from a high ankle sprain in the 2nd week of the 2014 season, Berry played four more games starting on November 2nd against the New York Jets. During a game against the Oakland Raiders on November 20th, Berry was experiencing chest pains. During a physical examination a mass in his chest was discovered. He was diagnosed with Hodgkin's Lymphoma on December 8th. A cancer in the immune system would put his potential Hall of Fame NFL career on hold and possibly be life ending for Berry.

After many painful chemotherapies and long treatments, Eric Berry announced on July 28, 2015 that he was cleared of cancer. Eric experienced eight months of fighting a disease that put his life in danger. Now the Kansas City Safety has a chance to not only improve his already impressive NFL career, but can now add beating cancer to his most memorable highlights. Next on his list is to get back on the field and play like he had never left in the first place.

Eric Berry's impressive resume first began when he was the #3 ranked player in the 2007 high school recruiting class. He was in the U.S Army All-American Bowl. Berry was one of the most complete defensive athletes to be recruited, so it was not a problem for him to get looked at by many colleges. Berry ultimately decided on the University of Tennessee where he turned to out be the most dominating defensive back in the nation. Berry was named SEC Defensive Player of the Year in 2007, as a freshman, by Sporting News. His 2008 sophomore year, Berry was SEC Defensive Player of the Year, 1st team All-SEC, Jack Tatum Trophy winner, and unanimous All-American. His Junior year in 2009 at Tennessee is where he was classified as one of the best defensive backs to ever play in the SEC. In 2009, Berry once again was 1st team All-SEC, unanimous All-American, and Jack Tatum Trophy winner again. His most prestigious honor was winning the the Jim Thorpe Award which is awarded to the best defensive back in the nation.

For Eric Berry, transitioning to the NFL was not hard at all. The Kansas City Chiefs took the strong safety from Tennessee with the 5th pick in the 1st round of the 2010 NFL Draft. In his first season in the NFL, Eric Berry became the 1st Chiefs rookie to be selected to the Pro Bowl since NFL Hall of Fame Derrick Thomas. So far in the NFL, Berry has been selected to three Pro Bowls (2010, 2012, & 2013), selected as 1st team All-Pro (2013), and been voted in as the #50th best players in the NFL (2014) by fellow players in the league. This is not a bad list of accomplishments considering the fact he was out for the 2011 season after tearing his ACL in the first game against the Buffalo Bills. With Berry now in remission of Hodgkin's Lymphoma, he will have plenty of time to make a successful comeback as he will be only 27 years old this December.

The most difficult part for Berry now is trying to get back onto the field and playing through the slight pain he has experienced from the chemotherapy. Eric played through a portion of the four pre-season games. He had to get into the rhythm of playing in the league again. Through most of last year, Husain Abdullah played at free safety where he proved to be a high level performance player for the Chiefs, especially in the passing game. Ron Parker took over for Berry at his original strong safety position. He showed a lot promise in the 2014 season with 94 tackles, 1 interception, and 12 pass deflections. In future games when Berry gets more comfortable, we could see a package with Berry at free safety and Parker at strong safety. In long passing situations, the Chiefs could put Berry at strong safety and Abdullah at free safety on the weak side of the offense.

The Kansas City Chiefs have so far played 2 games in the 2015 season with Berry in the rotation. Against the Houston Texans, Berry accounted for 2 tackles and one pass deflection as the Chiefs won a close game 27-20. It was Berry's first game since being diagnosed with Lymphoma. Berry did not start the game against the Texans in the first week nor did he start the next week against QB Peyton Manning and the Denver Broncos at Arrowhead Stadium. Eric Berry was the last player to be introduced for the Chiefs as the crowd cheered heavily for his return to Arrowhead Stadium, completely cancer free. The Denver Broncos did win the with a 31-24 score. The Chiefs running back, Jamaal Charles, fumbled to give the Broncos' the game winning score. Berry had himself a good game as deep safety that negated Manning's long passing game. Berry had four solo tackles against the Broncos but acted as the field general he was before cancer. It will be a while before Berry will start for the Chiefs, but he is in the rotation for a majority of the games. He must regain the strength that he lost in chemotherapy. All we can say for now is that Eric Berry is back and may be better than ever. He is a player that we all should be cheering for this season and the next seasons to come.