"The Lord Hath Done Great Things For Us; Whereof We Are Glad." Psalms 126:3 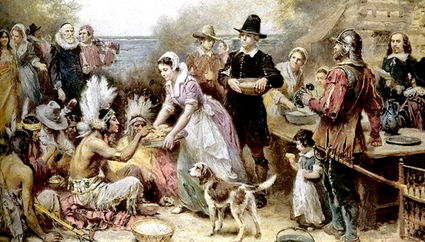 The tragic lessons of History will be repeated if History is removed from a nation's memory, as it has been for several generations. America's Christian History was replaced by Social Studies in public schools nearly a century ago. How many adults know what sacrifice and triumph brought about our uniquely American Holiday tradition of Thanksgiving?

Through brief bits of the story here, let's look at this American legacy, our own American heritage, and embrace it for a true Thanksgiving celebration this year. Go back with me to the Pilgrim Fathers of 1620, who embarked on the adventure of colony planting, with no experience, and no skills for the task, only seeking freedom of worship and self-government.

Picture the wild land and the wild sea, the bitter cold winter of 1620, and the illnesses which cost them half of their lives the first year. The contract with the mercenary shareholders who funded the "adventure", required them to practice Communism in labor and supply, denying them private property rights and other incentives.

Governor William Bradford took over the leadership of the colony upon the death of Governor Carver in the first year. Bradford ruled almost continually for thirty seven years, until his death. His literary gift has left us a detailed and documented history that is a treasure for every lover of History, and every seeker of Truth. The lesson of the Pilgrims rejecting Communism can be valuable today and help us to come against another similar "Pernicious System," as they called it. That system is strong in our post modern world today.

After abiding by the terms of their contract for two years, seeing that communism had brought the colony to the verge of ruin, Governor Bradford "had the courage to cut the knot he could not untie." He divided the land among the families, and placed every single person in a family unit. Attitudes changed. Now, mothers with children would go willingly in the fields to help their husbands. Wives were pleased to wash the clothing of their family rather than collectively. Working their own field, laboring together as a family brought peace and incentive, and Bradford wrote: "any general want or suffering hath not been among us since to this day." Every adult shared in the responsibility to pay the just debts, through private ownership and free enterprise, which brought into being a successful and profitable fur trade. Commerce, industry and brotherly love combined for success.

Yes, abolishing communism may have been a violation of the contract, but Governor Bradford saw that the system was pernicious (destructive) and the colony had a life and death struggle for survival. He made a defining decision and Free Enterprise was instituted.

Why do we remember this little colony, with never more than a few thousand people? God's Providence shown in their story is dramatic. In their own words, they prayed to be "stepping stones for others" to migrate, and indeed they were. They were the forerunners of the great Puritan migration of the 1630s.

When the Mayflower ship returned to England, not one Pilgrim was aboard. That little band of believers had introduced a new powerful force on this continent – that of individual religious liberty in practice. Unable to reform the Church of England, now they could walk with God, raise their families in a church congregation guided by God's Word alone, not by the King and not by the Civil Magistrate.

"Before our children remove their religious connections.....before they leave the old paths of God's Word.....before they barter their birthright for a mess of pottage...let us place in their hands the chronicle of the glorious days of the suffering Churches, and let them know that they are the sons of the men 'of whom the world was not worthy' and 'whose sufferings for conscience sake' are here monumentally recorded." John Overton Choules, August 12, 1843.

On that simple First Thanksgiving, one dynamic rises above all others. This small group of survivors labored to bring Glory to God for His Providence. They had survived hunger, disease, native attacks, unreasonable demands of their shareholders, the death of spouses, children, and best friends. Living in a wilderness they were utterly dependent and faithfully relying on God to sustain them. They rejoiced in freedom of worship and in the civil liberty of Christian self-government. They had been successful in establishing a covenant relationship with their Indian neighbors, who were present at the First Thanksgiving. Can you not see the Hand of God using those first seeds, which brought forth for us: Individual Liberty of Conscience, Christian self-government, and ultimately a Christian Constitutional Republic. May it be restored today.

A Day of Thanksgiving has been a continuing tradition in our nation. The Journals of the Continental Congress record a Proclamation by the United States Congress assembled on Saturday, October 18, 1783. These words are a portion of that proclamation:

"Whereas it has pleased the Supreme Ruler of all human events, to dispose the hearts of the later belligerent powers to put a period to the effusion of human blood, by proclaiming a cessation of all hostilities by sea and land, and these United States are not only happily rescued from the dangers and calamities to which they have been so long exposed, but their freedom, sovereignty and independence ultimately acknow-ledged..........The interposition of Divine Providence in our favor has been most abundantly and most graciously manifested, and the citizens of these United States have every reason for praise and gratitude to the God of their Salvation. Impressed therefore, with an exalted sense of the blessings by which we are surrounded, and of our entire dependence on that Almighty Being, from whose goodness and bounty they are derived, the United States in Congress assembled, to set apart the second Thursday in December next, as a day of public Thanksgiving, that all the people may then assemble to celebrate with grateful hearts and united voices, the praises of their Supreme and all bountiful Benefactor, for His numberless favors and mercies."

The Proclamation further leads in offering prayers for forgiveness, for wisdom to be granted, for prosperity for every good work, for peace for the nations, for blessings in the labors of the people, for commerce and navigation, for education and for the seminaries and all means of education, for true religion to flourish, and that the world be filled with His Glory. October 18th, 1783.

John Hancock, Governor of Massachusetts, called for a Day of Thanksgiving established in a proclamation dated November 8, 1783. In his proclamation, he praises the Lord for the "Unanimity and Resolution to adhere to our just Rights...." He refers to God as "our powerful Ally to assist us in supporting" those Just Rights. He pleads to continue "in the light of the Blessed Gospel, and secure for us, to the fullest Extent, the Rights of Conscience in Faith and Worship." And so much more is in his proclamation. We see pure Biblical Christianity strong here, and in the virtue of the character of these founders.

This Thanksgiving season, as a family and as a blessed nation, let us have a true celebration of praise and thankfulness to The Lord Who has done so great things for us.

Let me urge readers to go to the website (FACE.Net) of the Foundation for American Christian Education, Chesapeake, Va. and learn of their publications on America's Christian History. Also, they publish the Webster's 1828 Dictionary of the English Language, which is the language of liberty.

The Source for these Proclamations: The Bible and The Constitution, published by FACE.

More information is available through the writer of this column, Mrs. Bobbie Ames, bobbiehames@gmail.com

In the name of God, Amen. We, whose names are underwritten, the loyal subjects of our dread Sovereigne Lord, King James, by the grace of God, of Great Britaine, France and Ireland king, defender of the faith, etc. having undertaken, for the glory of God, and advancement of the Christian faith, and honour of our king and country, a voyage to plant the first colony in the Northerne parts of Virginia, doe by these presents solemnly and mutually in the presence of God and one of another, covenant and combine ourselves together into a civill body politick, for our better ordering and preservation, and furtherance of the ends aforesaid; and by virtue hereof to enacte, constitute, and frame such just and equall laws, ordinances, acts, constitutions and offices, from time to time, as shall be thought most meete and convenient for the generall good of the Colonie unto which we promise all due submission and obedience. In witness whereof we have hereunder subscribed our names at Cape-Codd the 11. of November, in the year of the raigne of our sovereigne lord, King James, of England, France and Ireland, the eighteenth, and of Scotland the fiftie-fourth. Anno Dom. 1620.