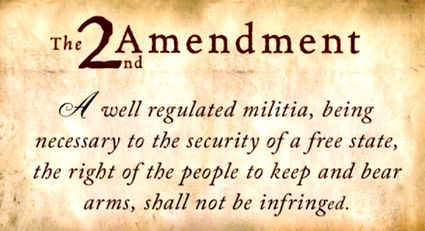 Over two years ago I first penned this column and not surprisingly since then there have been an increasingly number of senseless gun attacks reported. Just this year we had the South Carolina church shooting, the television reporter and cameraman in Roanoke, Virginia and just the other day a shooting at the Fort Meyers, Florida Zombie convention. And as usual, out come the knuckleheads insisting on complete gun control and the dismantling of the Second Amendment. I figured now might be a good time to review a short history and background of our gun heritage. By the way, history is full of such calls for the dismantling of individual gun rights by the state. Just read what guys like Hitler, Mussolini and Mao Tse Tung had to say on the topic. http://www.buckeyefirearms.org/anti-gun-quotes.

When I first started working on my master's degree in history, I remember the first required book was Carl G. Gustavson's work titled, A Preface to History. In this book, Gustavson outlines what he calls "Nine Questions to Historical Causation." He posits that before anyone attempts to understand any historical event, he must ask the following questions.

1. What was the immediate cause for the event?

2. Had there been a background of agitation for the principles victorious during this period?

3. Were personalities involved on either side whose strengths or weaknesses may have helped to determine the outcome of the struggle?

4. Were any new and potent ideas stimulating the loyalty of a considerable number of people?

5. How did the economic groups line up on the issue?

7. Did any new technological developments influence the situation?

8. Can the events be partially explained by weakened or strengthened institutions?

9. Was the physical environment itself a factor in the situation?

The purpose of asking these questions is to get the historian to look at any historical event in the context in which it transpired. This is what I plan on doing, very quickly, in regards to gun rights and the reality that the founders did indeed view gun ownership, among other things, as a necessary precursor to keeping renegade governments in check. Yes, I said renegade governments. This is because at the heart of the gun rights issue was the foresight these men had not so much for people to own weapons to protect us from one another, although clearly established, more important was their more "strategic" vision of totalitarian governments crushing the rights of the individual.

Let's take a look at America in 1773. America was being systematically crushed by a long series of oppressive taxes and restrictive laws such as the Currency Act (Colonies could not produce paper money) and Sugar Act of 1764 and the 1765 Stamp and Quartering Acts (Colonies required to provide housing, food and other provisions to British soldiers). All came to a head with the Tea Act passed by British Parliament in May 1773. Between the Quartering Act of 1765 and the Tea Act of 1773, we endured several small conflicts with the British including the Boston Massacre in 1770.

When faced with ever increasing taxes imposed by Parliament against the colonies, the Boston Tea Party erupted on 16 December 1773. We had had enough. England responded in 1774 with the Coercive Acts that ended local self-government in Massachusetts and placed it under control of the British Army. This act also closed Boston's commerce. In September 1774, the First Continental Congress was formed just three months after the first Continental Army was established under George Washington. In April 1775 the Battles of Concord and Lexington took place and a little over a year later, the Declaration of Independence was introduced on 4 July 1776. The war ended in 1783 after the signing of the Treaty of Paris giving the 13 Colonies sovereignty from British rule. Our constitution was adopted on 17 September 1787 by Constitutional Convention and the Bill of Rights – the first ten amendments – was ratified on 15 December 1791.

This is a VERY, VERY brief timeline of the war. The purpose is only to show, according to the nine questions of historical causation, that the American Revolution did not just happen but was the result of many factors, the vast majority of which are not listed here. But as we look at what these men had recently gone through, we have to get into their mind and ask questions that likely drove their decisions and thought processes. For example, the Third Amendment states, "No soldier shall, in time of peace be quartered in any house, without the consent of the owner, nor in time of war, but in a manner to be prescribed by law." Do you think the British Quartering Act of 1765 had anything to do with this? Only a fool would say, "No."

The founders had witnessed firsthand in Europe what corrupt governments could do to an unarmed people. The author of the Second Amendment, James Madison, actually went through over half-a-dozen iterations before arriving at what we see today. Madison's first version presented on 8 June 1789 actually stated, "The right of the people to keep and bear arms shall not be infringed; a well-armed and well-regulated militia being the best security of a free country but no person religiously scrupulous of bearing shall be compelled to bear arms." Ignoring a part dealing with conscientious objectors, Madison clearly wanted the right to bear arms to be separate while integral to the concept of militia. His next version presented on 21 July, switched the order placing the verbiage of a militia first. One version actually had the idea of the people's right to bear arms and militias as two separate amendments deserving separate votes. Finally, on 21 September 1789, after a long four-month process, we got our final version. It is clear the framers intended the right to bear arms not be limited to military operations contingent upon militia actions.

When I read comments by leftists who intentionally misinterpret the constitution for political reasons, I always go back to the men who either wrote the documents or those who lived in such contentious times. I care much more about their ideas than the ravings of the morally bankrupt intelligentsia. If you want to get a better feel for what they were thinking, read things like early commentaries of constitutional theorists, the Federalist Papers, and writings of men like Thomas Jefferson, John Jay, James Madison and Sir William Blackstone's commentaries on the Laws of England. Constitutional theorist St. George Tucker criticized the English Bill of Rights, for example, for intentionally limiting gun ownership in England to the very wealthy, leaving the majority of the population "effectively disarmed." Tucker wrote that he hoped the new American country would "never cease to regard the right of keeping and bearing arms as the surest pledge of their liberty."

In William Rawle's A View of the Constitution of the United States written in 1825, he penned: "No clause could by any rule of construction be conceived to give to Congress a power to disarm the people. Such a flagitious attempt could only be made under some general pretense by a state legislature. But if in any blind pursuit of inordinate power either should attempt it, this amendment may be appealed to as a restraint on both." Powerful stuff!

Joseph Story, Associate Justice of the Supreme Court 1811-1845 appointed by James Madison, described a militia as the "natural defense of a free country against foreign enemies, domestic revolts and usurpation by rulers." Story regarded the militia as the "moral check" against usurpation (wrongful or illegal encroachment, infringement or seizure) and the "arbitrary use of power."

In reality most liberals must misrepresent facts in order to prove their fallacious points. It is clear, however, that the founders of this country, men admittedly a lot smarter than I, considered the consequences of "a" government being oppressive and corrupt. Heck, they just fought and won a war because of exactly that. Had the Continental Army not been supplemented in the early days by armed men, their victory cannot be certain. It took armed men, willing to fight a king's tyranny, to turn the tide and win the war.

Although there have been many court decisions concerning gun rights, the intent of the founders cannot be denied. That is of course unless you are the proverbial cartoon ostrich with your head buried in the sand and your exposed rear up in the air for everyone to see. I don't know what course this debate will take over the next several years or generations. All I ask that both sides read what these men wrote and try to see what they saw and notice what they knew to be true according the world in which they lived. Yes the world has changed a lot since the 1700's but truth remains truth and as corrupt governments come and go, it may still remain an armed populace that may be the only thing between totalitarian dominance and the freedoms espoused in our constitution.