WHAT A WICKED WORLD 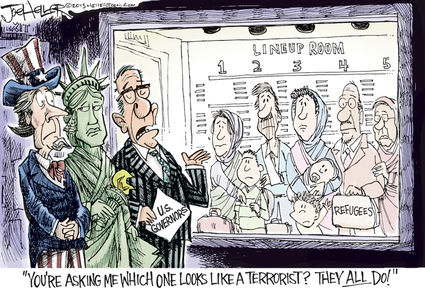 A lot has happened since my last Robservation. The Paris terrorist attacks, the Russian airline shoot down, the increasing concern over Syrian refugees coming to the States, President Obama's pathetic, sad and disgusting speech in Turkey, Rhonda Rousey getting knocked out, you name it. I want to touch on them just a little.

1. Russian airliner shot down: Not much to say here. Russia has finally admitted that their plane was brought down by a terrorist attack and yes, Vladmir Putin is pretty much pissed. They have launched a couple of thousand sorties to attack ISIS targets while we are still launching roughly 7 sorties per day with many of our airplanes coming home with their bombs still hanging beneath the wings for fear of possible collateral damage (i.e. accidentally killing civilians). We can debate the efficacy of this at a later date but the point here is that the Russians are taking it to ISIS. Funny thing is that their anger, righteous as it may be, seems a little askew when thinking about how just last July (2014), they shot down Malaysia Airlines Flight 17 and nobody seemed to care. Hmmmm.

2. Syrian Refugees: Back in September, I wrote a Robservation dealing with the refugee crises in Europe. So now in America, at last count, there are at least 33 governors saying they won't allow any of those refugees into their states.

This is where the argument intentionally gets chummed up by the left. Many of those who have absolutely no religious affiliation love to take scriptures, almost always out of context, and say how un-Christian we are for not wanting to open the floodgates for their arrival. Does this offend me? Not even close because I realize most of those people have no true understanding of the reality facing them. To most, it is almost as though they expect to see Mr. Roarke and Tattoo dressed in their white suites welcoming them to Fantasy Island. So let's get some things straight here. Yes, every one of us should have compassion and love for these people as the Bible commands. No true Christian is going to deny that. It hurts my heart when I see those beautiful little children in their current situation. How can it not hurt you?

But what we have going on, as evidence in the behavior of many, is something more ominous. When the 33 governors argue against the admittance of so many refugees, buried within their objections, hidden by the media, is their call for complete, thorough, accurate and honest background checks on each and every one of the so-called refugees. FBI director James Comey, (http://dailycaller.com/2015/10/21/fbi-director-admits-us-cant-vet-all-syrian-refugees-for-terror-ties-video/), came out and clearly stated that the U.S. does not have the capability or capacity to accurately vet each and every "Syrian citizen" that Obama wants to allow into the country. And yes, folks, President Obama wants to allow 10,000 in here. Even if we could actually clear 90% of those people, that would leave over 1,000 possible terrorists instant access into the US. And please keep in mind, ISIS said that is exactly what they are planning on doing. There is too much to write here but Google something like ISIS vows to infiltrate refugees. Some estimates say 20,000 have already done so. Instead of believing in the goodness of men, in this situation I am going to believe the words and doctrine of ISIS. Just like doctrine guides our military (I used to be a military doctrine analyst), doctrine guides the bad guys. They tend to do what they say so why should I believe some bleeding heart pundit sunbathing on Fantasy Island? Do you guys remember a dude named Adolf Hitler? In his book, Mein Kampf, he boldly called his shots and still nobody wanted to believe it. I don't think we need a review of those results. I like to take evil people at their word for the evil they want to perpetrate.

The point here is clear. Unless all can be vetted, none should be allowed in. It is really that simple because here is the question at hand when you cut through all the political correct garbage out there. If you value the lives of the Syrian refugees over that of American citizens, then let them all in no questions asked. If you, like me, however, value the lives of my American brothers and sisters more, guess what? Again, it really is that simple. Really!

So when I hear people crying about how un-American my stance is I simply say, "Shut up. You have no idea how to protect this country and what sacrifices it really takes." I have heard several people like Attorney General Loretta Lynch talking about the thorough "vetting process" we have in place but you know what? I think I am going to believe what the director of the FBI clearly states and what our own lying eyes are seeing taking place in Europe. You wanna hear a real Christian principle? Yes we are to feed the poor and hungry. Clothe those who need it. Yes, no doubt. But you know what, our leadership's responsibility is to care for his people first. Even in our own households we are instructed to provide for our own first, and if our leadership refuses to at least try and guarantee the safety of our own people, they are remiss, slack and arguably criminally negligent in their responsibilities. Yes the refugees are important to me, but you know what, American lives happen to be more important. If you don't like that answer, I really cannot help you, sorry.

By the way, I believe the best method of fixing this issue is to have a vote within the Senate. Only those states whose Senators vote yes will get refugees. Of course, Washington D.C. would get the lion share of refugees since they want it in the first place. I wonder how many "No" votes we would see?

3. Paris Attacks: I was going to address this issue but space and time preclude it. I will do so later. All I am going to say is that people in the West had better open their eyes to the reality confronting us and be willing to deal with it. 120+ killed, 352 injured. Really? I heard one person say on television the other day that this is the new normal and we had better get used to it. What? The "new normal." I refuse to accept that. Sorry. So you want me to believe that in our world today, normal is defined as having a pretty good chance some terrorist gunning me and my wife down while having dinner? Or while we are enjoying a night at the Shakespeare Festival, we can expect some guy to come in and blow the place up? Or should I accept normal as every time I climb into my Delta jet, I should expect a bomb to go off? That is normal? If you think so, you are a sad, sad, pathetic, weak, cowardly and sorry human being. To me, normal is a diverse society where blacks, whites, yellows, browns, blues greens, purples, Christians, Jews, Buddhists, Muslims, Sikhs or whoever it may be, can enjoy time together, at dinner, the theater, movies, baseball games without the worry of being killed by some radical crazies. That, my friends, is normal. Again, if you cannot see that, I cannot help you and I am not sure I even want to.

4. Obama Addresses the G-20 in Turkey: I have seen many of President Obama's speeches over the years and the one he gave the other day was truly a work of art. If you haven't seen it, go to YouTube and pull it up. Be sure to have a vomit bag sitting close to you. I mean it was really sad to see the President of the United States again refusing to say the words, "Muslim Terrorists" but in the same breath denigrating Republicans running for office. A quick scan of the audience was one of disbelief at his answers. I told my friend it reminded me of the Superman movie when he lost his super powers and the world was in crisis looking for him to come and help. But, alas he was nowhere to be found. The despair on the faces was similar to what I saw in the audience filled with reporters from around the world. People are actively looking and pleading for American leadership but are instead finding it from Russia and France. It is sad to see my great country being reduced in status while our President is sadly filling the role of Neville Chamberlain of the 1930s.

Among President Obama's most egregious line of statements dealt with his so-called strategies against ISIS. The man has absolutely no clue what he is talking about. None. Lt. General Dave Deptula spelled it out eloquently last night on Fox News. Last month I had an article published in The Weekly Standard online magazine. If you are interested, go to weeklystandard.com and in the search window, type my name. My article "Why Our Strategies Against ISIS Are Useless" will pop up. Read it and then if someone wants to debate our strategies, bring it. I'm here.

Lastly, the president's position on Syrian refugees was the clearest argument he made in the entire speech. It obviously demonstrated his main concerns. It is certain that he does not care what his FBI director has to say and that he arguably appears to have more regard for Syrian refugees than American civilians. "Rob, how dare you say that." See point number 2 above. No vetting equals little to no regard for American citizens, those same citizens he is obligated to protect as the President of the United States.